Breeding larks in the Arava

It is so nice to witness the results of the phenomenal rainfall we had in our desert region this winter. Those enigmatic and nomadic larks that are usually so difficult to see, are breeding with great success.
This morning I revisited an atlas box in the Arava, to confirm breeding of birds I saw there on my previous visit. Weather was good early in the morning, and quickly I found a family of Dunn's Larks - both parents with a fully grown juvenile. They were very mobile and I didn't manage to get close to them at all. They flew west, and later I found in that direction the same or another family, again very mobile birds.
Bar-tailed Lark was the most dominant species in the box, with two families, several more singing males, and this cool female I found incubating on a nest under a small bush: 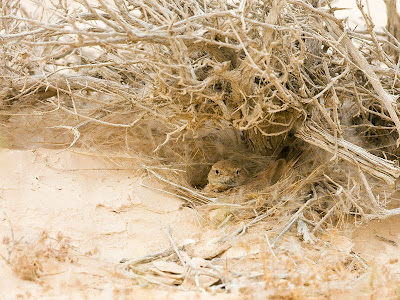 I was curious to see the Thick-billed Lark nest that I saw a few weeks ago. After making sure that the nest was abandoned, I had a close look, and it's quite an amazing nest, the size of a tennis ball, lined with toilet paper! 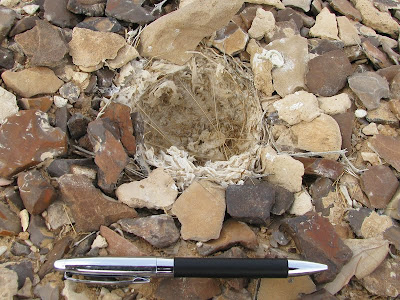 Soon the weather deteriorated, and a strong dust storm began. I headed back north early, and on the way back I followed up on a nest of Temminck's Larks at Hameishar found by Jonathan Meyrav 9 days ago. As expected, I found three fully grown juveniles flying together not far away from the used nest; no sign of their parents around. Damn, these larks breed so fast! 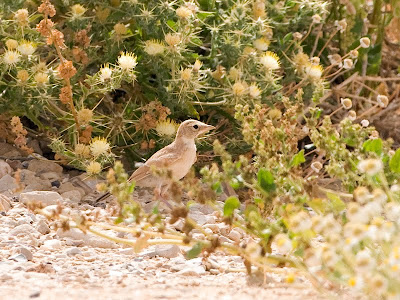 I checked the hills near Sde Boker for Hill Sparrows, and indeed I saw quite a few birds, including a female (?) feeding two fledglings. They must be breeding in their thousands all over the Negev.