No, I'm not doing a Big Year again... Yesterday evening news broke of a Pied Bushchat found by Yishay Ben Adar, near Ma'or, about an hour drive from home, 10th record from Israel, the first major rarity of 2023. I have seen this species in Israel three times before - my first was in 2001, an overwintering female at IBRCE, Eilat, found by James P. Smith. In October 2012 Eyal Shochat found a fantastically cooperative male in Yeruham. Another male found by Igal Siman Tov delighted the Eilat Birding Festival guests in March 2014. 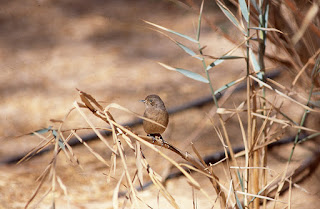 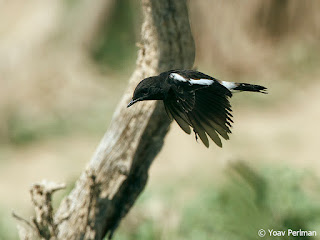 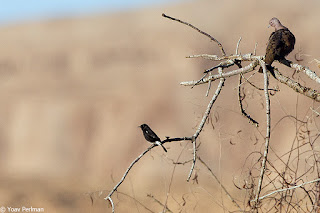 Since then, Pied Bushchat hasn't been seen in Israel, so this current one understandably attracted serious attention. Including mine. It's a fine bird, especially in a Western Palearctic context, so why not? When I met up early with Piki and Rony it was pissing it down with rain, pretty grim to be honest. But as we headed north up Route 6, daybreak saw an improving weather. We got there after seven, meeting frustrated birders seeing nothing since dawn. I have birded in strange places before, but this was at another level - on the outskirts of Baqa El-Garbiye, in a small neglected olive grove wedged between a major road and a farm, observing from a bit of rough ground strewn with rubbish and dead livestock, skulls, bones, skins, pretty grotesque. 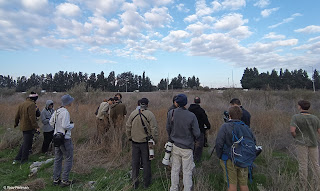 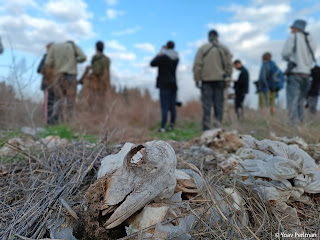 Obviously the first birders looked at the wrong spot, as another group (Itamar, Nitay et al.) who checked an adjacent spot soon relocated the bird. We hurried there and started watching the bird at some distance. Light conditions weren't great, and I failed to adjust my camera settings, so my pics are rubbish. Yet it was fun spending time with this gorgeous bird. It was pretty active, catching insects, displaying its white wing patches and huge white belly patch, indicating it belongs to ssp. rossorum, the westernmost population of the species breeding as far west as E Iran. 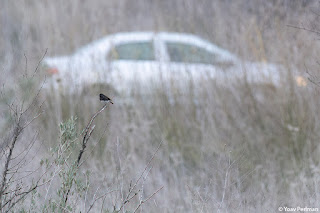 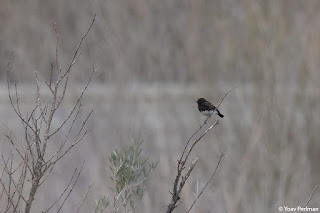 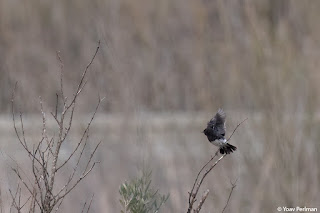 Eventually the bird moved a bit closer, to everyone's delights, and performed quite well. It was vocal too, I managed to capture some calls using my phone. 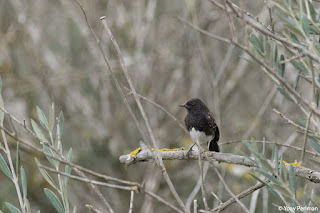 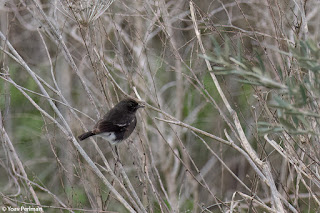 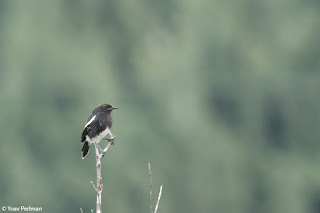 Of course there were some more birds around, that went into the eBird checklist here.
פורסם על ידי Yoav Perlman ב- 12:57 PM