Yesterday was Global Big Day, organised by eBird, part of the international events of Global Bird Weekend and World Migratory Bird Day. Our team 'Champions of the Flyway' traditionally included Jonathan, Re'a and me.

Initially, we had plans for a selective Big Day, focused on special specialties only, at a slower pace. Eventually, we changed our plans and returned to a proper, ambitious full Big Day effort, the way it should be done.

We left our homes in central Israel in the early hours to arrive in the Hula Valley enough time before dawn for some night birding. Our traditional Tawny Owl was waiting for us at the entrance to Hula NR. A night drive in the Agamon failed to produce other new owls (only Barn) or a nightjar, but produced a surprising, late Golden Oriole - our only one for the whole day, spotted by Re'a roosting in a big tree. 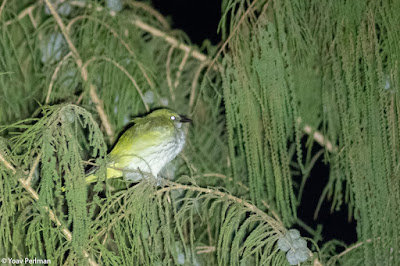 Several Jungle Cats were hunting in the dark, including this poser: 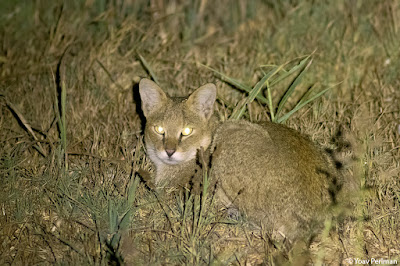 At day break, we were positioned at the southern end of the Agamon, and enjoyed this scene, now complete with crane cacophony:
The Agamon and adjacent fields were fantastic (eBird checklist here). Huge numbers of birds. many species, good quality including Moustached Warbler, Black Francolin, Pallid Harrier. A cut alfalfa field was coated with hundreds of Yellow Wagtails, and even larger numbers of Corn Bunting. Several Red-footed Falcons were hunting over the ploughed fields. 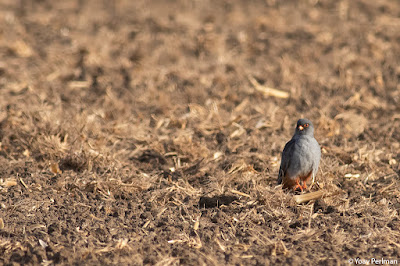 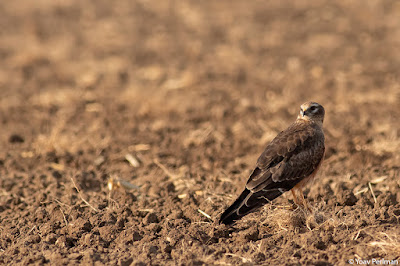 We quickly visited Lehavot Habashan fishponds - it would have been rude to leave the Hula Valley without seeing Marbled Teal. There were still good numbers of Marbled Teal there, 108, alongside a nice selection of shorebirds (eBird checklist here). 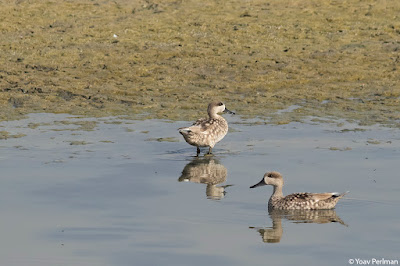 We left the Hula Valley satisfied with 114 species under our belt. When we arrived at Susita it was already very hot. Birding was tough, we missed Long-billed Pipit but added a few good species. While birding there news broke of a Pin-tailed Snipe in central Israel, close to home. We contemplated the option of altering our route to twitch the snipe. In an act of maturity and responsibility we decided to stick to Plan A and continue as planned. This came with some disappointment, as Jonathan and I are doing a Big Year.
Global Big Day is timed to suit best N American birders' calendar. In Israel, both October and May Big Days happen when the weather is very hot. Yesterday was no exception, and when we arrived in the Bet She'an Valley the temperatures were soaring towards 40 degrees, making birding difficult. What to do when it's so hot? We walked a couple of alfalfa fields, failed to find Oriental Skylark but added Richard's pipit and a surprise Spectacled Warbler. We were melting. Bad choice. Birding the fishponds, for waterbirds, stationary, made more sense (eBird checklist here). The White-tailed Lapwing remained in it's wonderful pond that hosted many new shorebirds for the day. There were some raptors up in the air, though we failed to intercept a proper stream of raptor migration the whole day. Light conditions were harsh, and we were in a hurry, so I didn't take any photos. Jonathan shot this video of the wonderful pond with the lapwing:
We left Bet Shean Valley with 142 species and headed cross-country towards the Dead Sea.
Ein Gedi NR carpark was exploding with humans rather than birds. Still, some nice desert species were present, including Fan-tailed Raven. 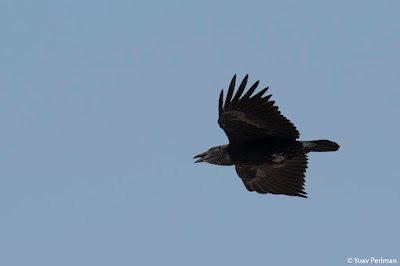 Note that the bird in the center is ringed: 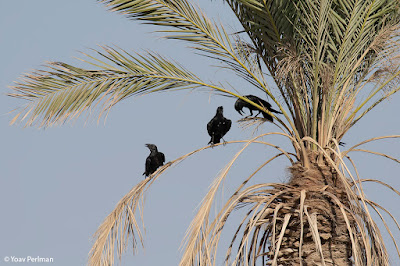 Ashalim Reservoir is a stunning location, and I love birding there. It provided us with a few good species, including Dead Sea Sparrow and African Swamphen (eBird checklist here). 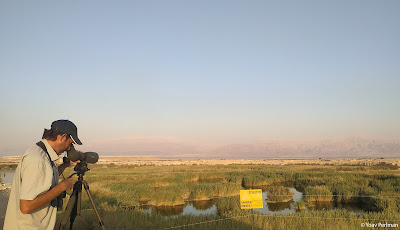 Late in the afternoon we arrived at Heimar Reservoir. Immediately we enjoyed a fantastic show by Sooty Falcons, at least four of them, hunting hirundines high up. Top quality birds. Just before dusk we Re'a struck again - Isabelline Shrike! Boom! Very nice surprise. 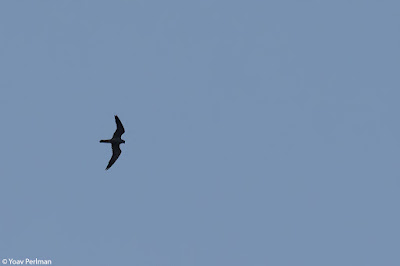 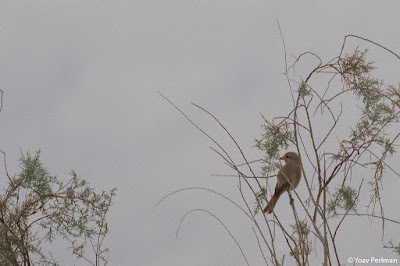 After dusk we checked a nearby site for Nubian Nightjar. It's not their main site, and habitat there isn't optimal, so it wasn't a big surprise we didn't succeed. However, the day was topped by a fantastic Desert Owl hooting in a nearby wadi.
Our daily total was a very satisfying 159 species. This is our best autumn Big Day score so far. This is the second time we do a cross-country effort. In May 2019 our route was even crazier, because it included also Mt. Hermon, and we ended up with 164 species. So our score yesterday is pretty good for our effort I reckon. Of course, like in every Big Day, we missed a good number of silly species, and gained a few 'Wild Cards'.
Thanks Re'a and Jonathan for another memorable Big Day. It was a day full of quality birding and lots of fun with the best possible team. Thank you guys.
Thanks to the organisers, eBird and Global Birding - always a pleasure to participate in this global event. Thanks to Swarovski Optik for the privilege to use the best optics in the world.
####################### Post-script ##############################
After a well-deserved night sleep, this late morning I went with Jonathan to look for the snipe at Tel Afek. We weren't optimistic. This is a super intensive site, most it it developed for recreation. Yesterday, as the park filled up with hundreds of noisy families, the bird vanished. This early morning many birders searched for it, without success. We birded the park hard, checked all habitats that made some sense for a skulky snipe, without success either. Then Oren Maman called - 'Come quick, I found it!'. It was sitting quietly under a tree in the most intensive section of the park, between picnic tables and screaming kids. We must have walked right past it, as did many other birders. 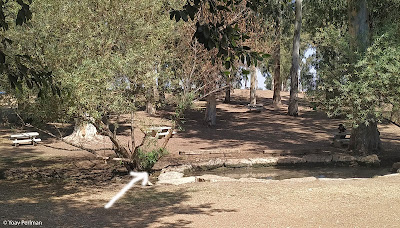 It sat there motionless for a while until a screaming kid that ran past it flushed it a short distance. Fantastic views of it. Great year bird, and a good rarity in Israel, with about 14 records only. The identity of this bird was confirmed by call, and by photos of it preening (by Ron Singer), displaying its pin-like outer tail feathers.
Note short tail 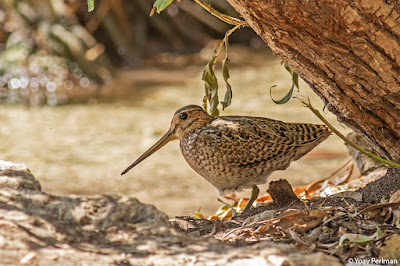 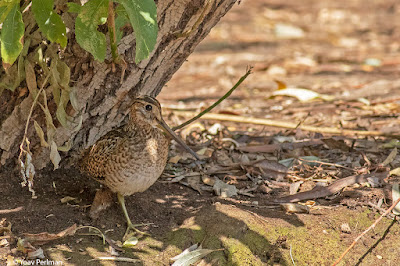