Since my previous update, I continued doing more or less the same. I am still out birding every day, migration is still awesome, life is still busy, and birds are great. Here are some highlights from recent week:

A week ago it was Champions of the Flyway. I had planned to race, but last minute my team disintegrated. Therefore I re-joined the organising team. For this, I travelled up to the Hula Valley, where I accompanied some teams competing in the race, checked they're doing OK, helped those that needed help, and basically enjoyed a good afternoon birding in the valley. At Lehavot HaBashan fishponds, the only reservoir with water was jam-packed with birds (eBird checklist here). Importantly, it held the largest concentration of Marbled Teal I have ever seen in Israel - I counted 404! Incredible number for this globally and nationally threatened duck. It is possible that it's the entire population breeding in the Hula Valley. INPA (with the assistance of us, BirdLife Israel) are monitoring their breeding. In 2021, the national breeding population included 59 families that produced 508 chicks. 80% of the national breeding population was in the Hula Valley. This video shows a section of the reservoir:

A nearby alfalfa field held a nice flock of Red-footed Falcons and Lesser Kestrels - always wonderful to see. 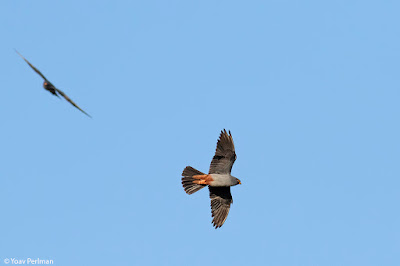 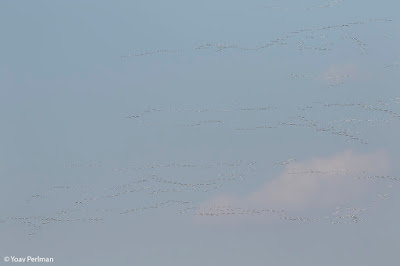 In the Agamon I did a cheeky live Facebook video of the flock that went down to roost:

After dark, as the teams ended their day and arrived at Agamon HaHula, we (the judges) picked their brains, grilled them and ended up with the winners - The Wrens. Well done!

Champions of the Flyway 2021 results (1/3)@flywaychampions 2021 overall winners are The Wrens. They recorded a staggering 166 species - well done! The team included Klil (18 yo) & Avner Zeitlin & Shachar Hizkiya (16 yo) pic.twitter.com/rPqi9v5i48

Fast forward a few days (and miles and birds), on October 4th I joined Darren for an enjoyable ringing session at his site in Sde Boker. Among the many 'normal' looking Willow Warblers, one really stood out. It was huge (wing 74), dark and sooty, probably belonging to an eastern or northern population, maybe 'yakutensis', maybe 'acredula'. Hopefully DNA results will provide an answer. 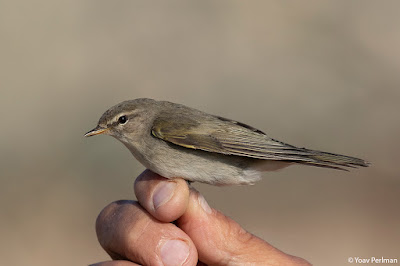 Next day I paid Ma'agan Michael a monthly visit. We are restoring a large section of the fish farm into a rich wetland, for biodiversity and climate. The work on the ground should commence very soon. In the meanwhile I am monitoring bird responses to management activities, including description of 'before' and 'after'. It was a fairly quiet morning, but at Ma'agan Michael even a quiet morning results in 93 species (eBird checklist here). This was a fascinating scene on the beach - Horned Ghost Crabs working on a Loggerhead Sea turtle Carcass - doing what they should: clean, decompose, recycle.

My post-work birding session at Ma'agan Michael was interrupted by news of a White-tailed Lapwing at Kfar Ruppin, found by Barak and co. White-tailed Lapwing is not a drop-everything-and-run rarity, unless one's doing a Big Year. An hour later I was watching it, from a safe distance in harsh light - not the best quality I'm afraid.

The pond it was in was wonderful. So many birds, so diverse (eBird checklist here). 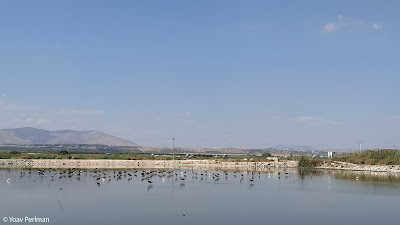 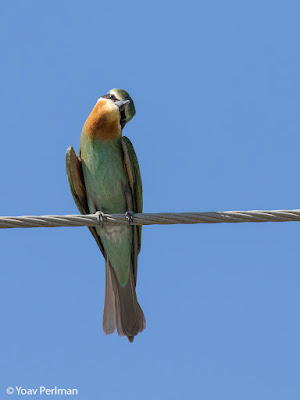 Reporting live from the field, while writing this post at home, I got messages indicating there's good eagle migration over home. I step outside and look up. Eagles. I spend 23 magical minutes counting them until the stream drifted east where I can't see behind me neighbour's house. 1092 Lesser Spotted Eagles and a bit of other stuff too. Cool. 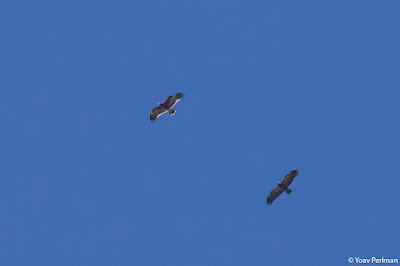 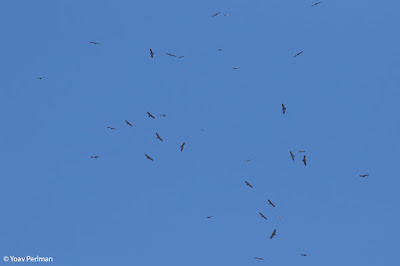 This recent checklist also marks my 5000th checklist on eBird.