Yesterday the IL big day team (Jonathan, Re'a and me) reunited for our bi-annual mad dash across the country. Despite doing it for several years now, our motivation is still high. This year, eBird October Big Day was merged with Global Birding Weekend, and we were happy to support both efforts.

As in previous big days, focus of the day was on hi-speed birding, and there were few opportunities for photography. We left home in the middle of the night, ticked Barn Owl en route, and arrived at the gate of Hula Nature Reserve well before dawn, to quickly hear Tawny Owls. We entered Agamon Hula when it was still dark, and were rewarded by great views (but awful photos) of a majestic Eurasian Eagle-Owl, not too common down in the valley. 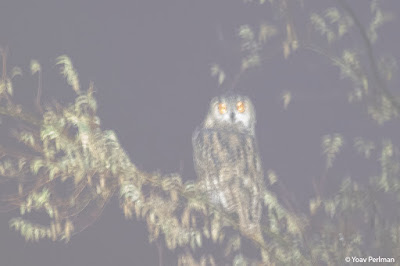 Early morning birding was good in the Agamon - plenty of birds around (82 spp), nothing special but Sibe stonechats, Black Francolin, Stock Dove and soundtrack of newly-arrived cranes were all quality. The weather was lovely and cool - in fact it was the first time this season that I wore an extra layer. 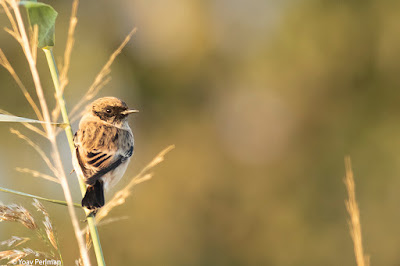 Syrian Serin - sorry, messages came in to my phone

After we descended from Mt. Hermon, temperatures were already high. We needed to work quite hard to find birds in this heat but I think we did rather well (and thank god for car air conditioning).  On Mt. Hermonit we found a male Finsch's Wheatear. In Susita it was so hot that we feared the Long-billed Pipit running across the road would burn his feet. 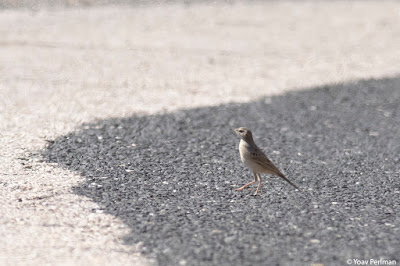 When we arrived at Kfar Ruppin, at the bottom of Bet Shean Valley, the heat was really challenging, for both birds and humans. However, with hard work and good gen we found most specialties we were after, and somehow managed to enjoy good birds obscured behind the clouds of Black Kites everywhere: Daurian (Isabeline) Shrike, 3 Oriental Skylarks, Richard's Pipit, Dead Sea Sparrow.

Heading west we quickly stopped for some gulls in Heftziba where a lovely dark morph Eurasian Marsh-Harrier flew past. 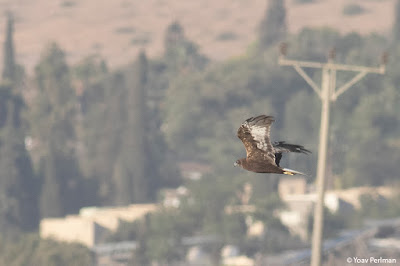 Our last birding site for the afternoon was HaMa'apil fishponds. We quickly got on to the Greater Painted-snipe that had been present for about three weeks now, standing motionless at the corner of its favourite little pond. Lovely bird, and especially for me it was a big moment of relief. Ashamedly, In recent weeks I have been up there a few times already, failing to find the skulker each time. So it was very well received. 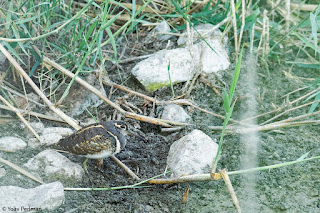 Our day ended with 151 species, quite respectable I think. Certainly much better than the 130 of October 2019 or the 137 of May 2020. Yet, I think that the potential is much higher - again we missed good raptor diversity, and passerine migration on the slow side. Let's see what we do next year.
Thanks a bunch to my team, Re'a and Jonathan, for another successful Global Big Day. Fun and laughs all day long, you guys rock! It was a privilege, as always, to use the supreme optics provided by Swarovski Optik. Makes finding birds so much easier!
פורסם על ידי Yoav Perlman ב- 2:18 PM