Yesterday was eBird's Global Big Day, this year coinciding with World Migratory Bird Day. While most of the biding world is still under some kind of lockdown regulations, here in Israel there has been a serious relief of travel restrictions in recent days. Therefore, Team IGBD reunited for another run - Jonathan, Re'a, Nadav (far northern section) and me.
We had developed a plan, quite similar route to what we did in 2019, bar one change - we decided to skip the desert bit, shorten driving distances by staying only in the north. It was a great plan, but what we had not planned was the weather. Weather forecast for yesterday looked a bit windy after 10:00 but nothing too dramatic. Eventually, weather was our main challenge yesterday.
We left home very early to arrive in Hula Valley well before dawn. It took us some searching but before dawn we already had a few owls, including Tawny Owl. When we got to Agamon Hula the wind was already blowing very hard. With the dry air and soil, the wind blew up red dust into the air, creating very difficult birding conditions.

Our most productive hours of dawn went by frustratingly quietly as birds kept a very low profile. We managed somehow Marbled Duck, Golden Oriole and a few other species but the total tally was much lower than expected. Also, because of the fierce wind, the birds and I were not in photography mode at all. Only these European Bee-eaters posed briefly in soft, overcast light. 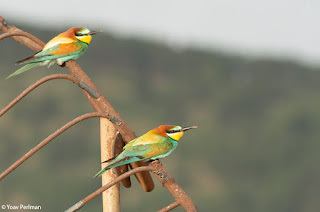 We left the Hula Valley and headed up towards Mt. Hermon that looked quite clear at the time. What a mistake. By the time we got there, dust storm turned into torrential rain, gale-force winds, 6⁰ C. Horrible birding conditions. We did our very best but saw little. Only in late morning, when we descended to lower elevations, we started seeing and hearing some birds. Eventually we left Mt. Hermon with almost all specialties (Syrian Serin, Sombre Tit, Western Rock Nuthatch etc.) in the bag, but very few species altogether, hardly any migrants. It was almost noon, and we hadn't even reached 100 species yet - quite a blow.

Our next stop was in the northern Golan Heights, where things improved a bit, though the weather was still far from ideal. Black-headed Buntings showed nicely, and Calandra Larks were in flight song over some fields.


Singing in the rain 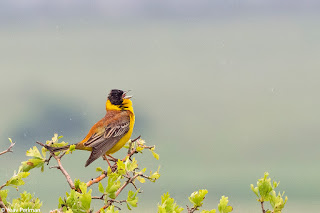 Black-headed vs. Corn, with raw 'behind the stage' soundtrack. Translated from Hebrew:

Jonathan: No way I can film this handheld (we were sat inside the car, YP)
Yoav: Shhhhhhhh....
Jonathan: Oh, both of them together, arrgghhh,

We continued down towards Lake Kinneret, where improved weather conditions aided us in a productive midday visit to Susita - Long-billed Pipit, Little Swifts, Blackstart and others showed quite efficiently.

In the early afternoon, Kfar Ruppin in Bet She'an Valley was OK (Little Bittern, Pratincoles and few raptors on migration) but other sections of the valley were quiet.
We ended the day on the Mediterranean Coast, at Ma'ayan Tzvi and Ma'agan Michael. The pond that hosted the Three-banded Plover was still shorebird-productive (17 Broad-billed Sands etc.) but several common species were missing. Frustratingly, Ma'agan Michael beach was totally devoid of shorebirds. We had to settle for a romantic sunset, decorated with hundreds of terns flying over the sea.

Our last new bird of the day was Long-eared Owl, a squeaky juvenile back in central Israel.

Our day total was 137 species. Quite poor compared to 164 last year. However, I think that despite the challenging weather conditions we did rather well. We certainly did our best, and on paper our route was good. Next time we might try another combo though.

Huge thanks and kudos to my team mates, Jonathan, Re'a and Nadav. The tough conditions didn't turn our spirits down, and it was a blast, as always. Thanks also to Swarovski Optik Nature for their ongoing support. Here's to GBD2021!
פורסם על ידי Yoav Perlman ב- 2:01 PM