Yesterday morning I went with Piki to Zikim Beach, hoping to connect with the Audouin's Gull present there for a few days now. At first the beach was gull-free. We joined the finder Gabi Levitzky and shortly after I spotted a gull heading south towards us over the water - long bill, sloping forehead, silver back - it's the bird! It made a nice flyby, displaying its immaculate 2cy plumage and dark legs. What a classy bird: 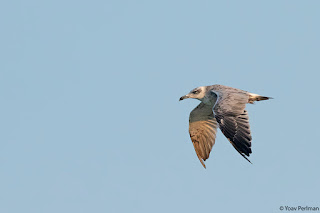 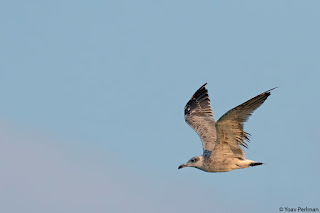 It landed further south on the beach, just behind the fence of the security zone north of the Gaza border. It joined a small group of gulls that included 2 Yellow-legs and 1 rogue Baltic.

Dwarfed by a Yellow-legged Gull 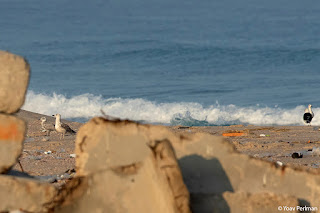 We inched closer carefully, and eventually reached a reasonable distance. This gave us a good opportunity to study the finer plumage details. 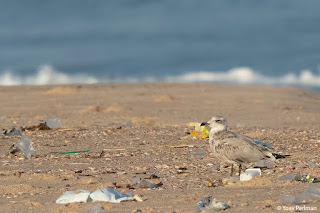 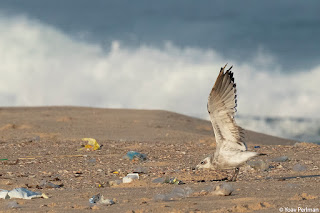 We left the bird in peace on the horribly-polluted beach. Environmentally, it is quite depressing there - all this rubbish washed up on the beach originates in Gaza.

Audouin's Gull is a rare visitor to Israel, just about annual, almost exclusively along the Mediterranean Coast. It is surprisingly rare in Israel, as it breeds in Cyprus, about 350 km away only. It was a year tick for me (in Israel), and a fine bird it was. Other than that we did not see too much - eBird checklist here.

We met up with Koby, the local NPA ranger. We joined him to translocate a Loggerhead Turtle nest found that morning. This section of the beach is closed off to vehicles. Tyre marks in the pic below belong to the ranger's pickup who scans the beaches every morning for signs of female turtles beaching for egg-laying, like the tracks of our female: 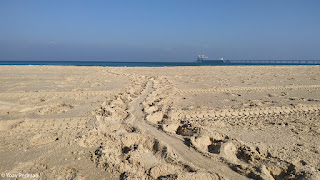 Nests are translocated to protect them from predation - there is serious predation risk by foxes and jackals. We dug up all 51 eggs, and placed them carefully in a bucket for translocation:

Piki, Koby and Bamba (in the back of the pickup) 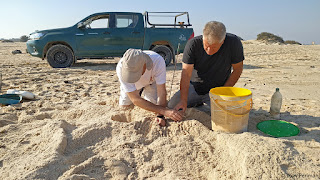 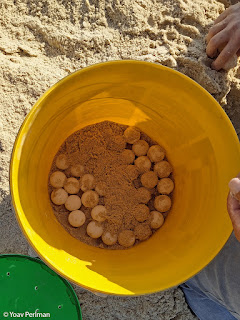 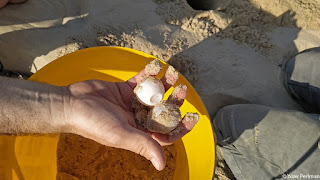 The eggs were placed in a new nest, within a predator-proof enclosure nearby: 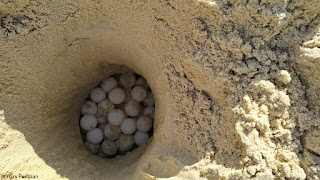 Good luck to the little ones in about 60 days! Kudos to INPA and to Koby for this hard work sustaining the Sea Turtle population in Israel.