Yesterday Team Brazil (my brother Gidon, Ami, Eli and myself) reunited and ventured deep into the Negev Desert in search of some unique birds and mammals. Our first stop (Kelach Sinai NR) was very cold and bird activity was rather minimal during the golden hour. We had one brief female MacQueen's Bustard that shot off as soon as it spotted us, a couple of Spectacled Warblers and not too much more. Yet, golden hour is golden hour and one must take photos of what there is available. 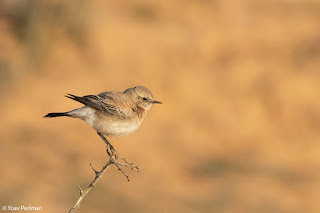 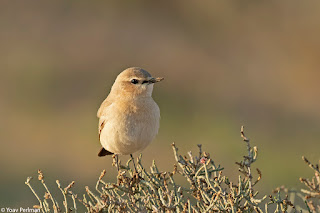 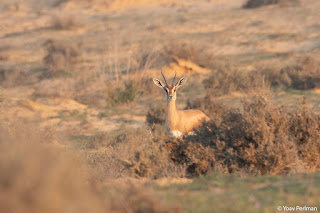 After a quick breakfast picnic we headed south of Ezuz, towards one of the remotest desert sections of the country. We had some nice birds - Pin-tailed Sandgrouse, Asian Desert Warbler and Bar-tailed Lark. Crested Lark is so common in cultivated areas, suburbia and even urban settings, but in the desert it looks much better: 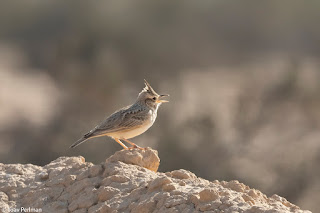 What we were really after was dancing MacQueen's Bustard (AKA Asian Houbara Bustard). It is globally Vulnerable, also in Israel they're in trouble, classified as Endangered. We scanned vast areas that used to host numerous dancing males, but saw only three, testament of their worrying state in Israel. Some of the old faithful boys were not present, which was rather sad. Eventually we connected with a male who seemed quite confident with us. We watched him for a while doing normal bird stuff - feeding, preening and walking around. 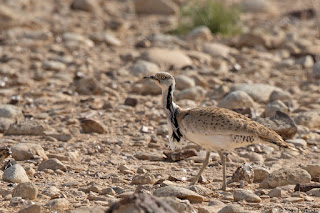 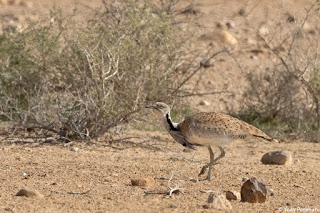 It was getting warm and we had low expectations from him in the way of dancing - he also looked rather young with unimpressive black neck sides. But then we experienced that special moment. He halted, stretched his neck up to look quite impressive: 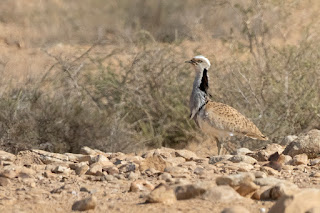 Suddenly, within two seconds, he transformed from a normal-looking birds into an alien, puffing his neck feathers up to cover his head: 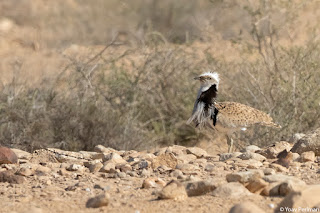 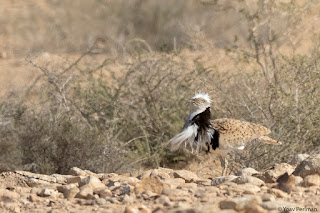 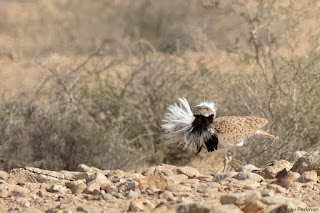 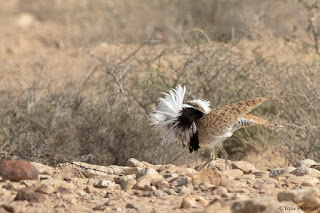 This is really a video job, which I did not shoot. I have many photos of this transformation - will try to construct something together from the images soon. I have witnessed this kind of transformation with Great Bustard a few years ago - bustards are such fascinating yet odd birds.

And off he was, dancing across his chosen arena to impress an invisible female, waving his swagger all over the place, looking kind of dumb (and the shape of a cockatoo on his forehead) but apparently very full of himself. At first he performed near a horrible barbed wire laying on the ground: 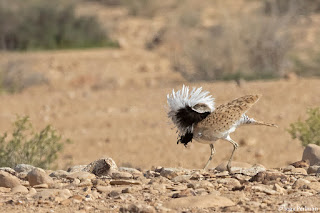 Then he stopped, turned around and for a few second returned to look like a normal bird: 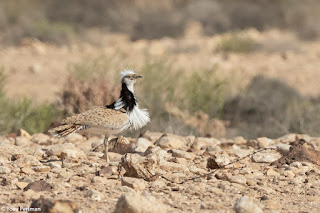 But only for few seconds - he puffed himself up again and returned to dance, thankfully away from that barbed wire this time: 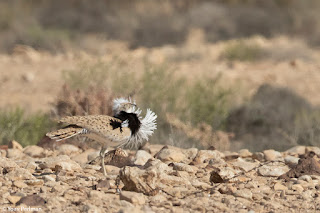 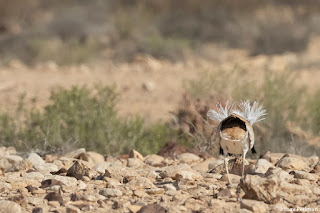 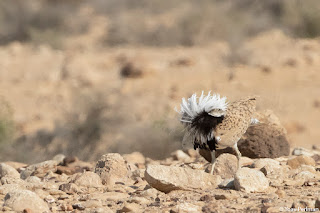 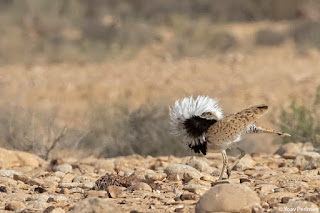 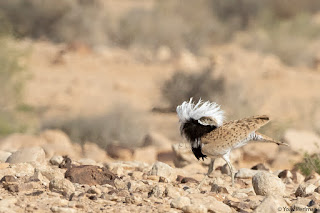 Eventually he danced out of view and we let him be. The whole act lasted for a minute or two, and those were moments of true joy for us. To share such an intimate moment with a threatened and so unique bird is very special. I can complain about the poor photography - light conditions were horrible, he was a bit distant and that barbed wire, but I guess I shouldn't.
פורסם על ידי Yoav Perlman ב- 11:03 AM