Today I worked with NPA marine rangers on seabird identification near Ashkelon. There were no proper seabirds around, so we made do with gull identification. Can't get any better than that. We spent a bit of time inside Ashkelon NP, then checked for some gull rafts inside the coal depot. At one secluded spot a nice mixed group contained, among the striking Pallas's Gulls, a few other taxa, especially fuscus and heuglini. A metal-ringed cachinnans, metal ringed Pallas's and two darvic ringed fuscus were out there, but frustratingly too distant to read.

Armenian Gull is less frequent down the southern coast compared to the northern coast and northern valleys where it is the 'default' large gull. As spring comes, adults like this gradually lose the diagnostic black bill band. I have seen individuals with a more convincing P3 pattern, but the overall solid black wingtip (very limited grey tongues on P7/8) and deeply hooked bill leave no doubt that it's armenicus: 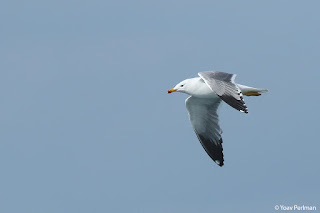 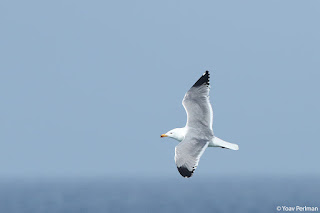 Large numbers of Loggerhead Sea Turtles were washed up dead or dying on the coast over the last few weeks. This one was washed up on the beach this morning. 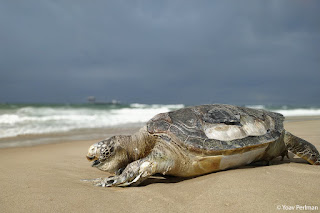 Some of the few remaining Mountain Gazelles still roam on the vegetated coastal dunes. Sad to see numbers of this globally Endangered mammal dwindling. 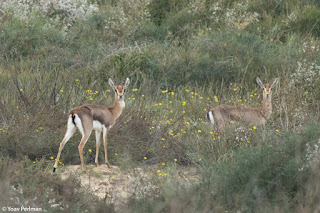 Thanks to Guy (NPA) and his team for a great day out.
פורסם על ידי Yoav Perlman ב- 9:41 PM