For Israeli birders, any crossbill is special. Even Common Crossbill is a good rarity in Israel. A good  October arrival of Parrot Crossbills on Shetland and Orkney promised some hope for East Anglian birders, and a few days ago this promise materialised when Richard Allen brilliantly found a group in Thetford Forest. Yesterday I could not go, but this morning I was there very early, too early... It was bloody cold! 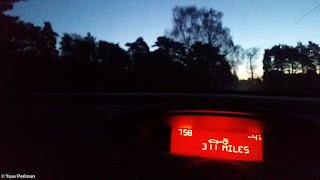 But soon after first light finches were moving around. I met up with Ash there, and after a short while of shivering and waiting around, the crossbills did the decent thing: a flock of 13 crossbills sp. flew up to their favourite stand of Scots Pines in the carpark of St. Helen's picnic site. The flight calls sounded good, and when I got my bins on them, sat on the top of the tree - oh that massive bill! Boom! After a moment of relief and thankfulness for our good luck, we took some mandatory half-dark record shots: 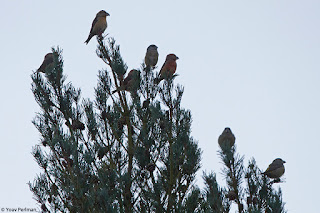 Then we made a circuit around the tree to get better views with the rising sun in our backs. Another three Parrots Crossbills joined to form up the flock of 16 seen yesterday. They didn't stay long enough to be fully lit by the sun, but the views were certainly better. The colours on my camera didn't come through very well - some males were brilliant red. 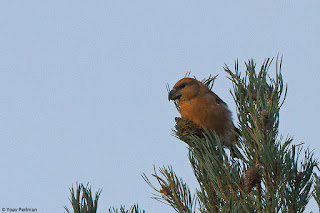 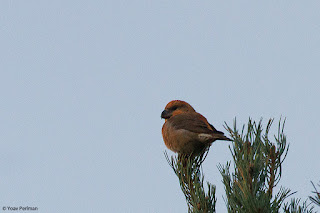 They had a unique habit of plucking whole pine cones and stripping them - I don't know Common Crossbills well enough but apparently they don't do that? 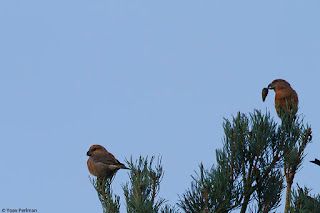 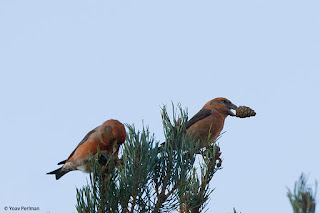 Colours in this short phonecoped video through my Swarovski ATX95 came out somewhat better:

Despite my frozen fingers, somehow I managed to sound-record them with my phone as they moved off at 07:45. Link to Xeno-Canto here. Many thanks to  Dave for his help in processing the file. 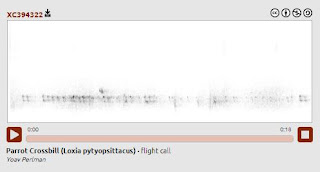 I like this spot! There were quite a few birds around the picnic site. Nobody feeds the bird there like three years ago, but still it was a fun morning. I am really happy with these birds - a global lifer for me. Fingers crossed for Two-barred (or even White-winged!) later on this winter.
פורסם על ידי Yoav Perlman ב- 10:20 PM