Went to Cley this morning for a few hours of seawatching. With winds predicted to be like this, there wasn't really another option: 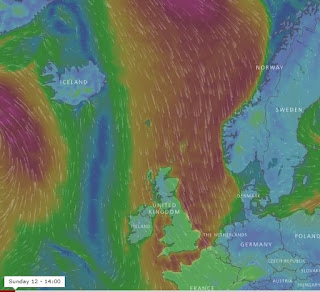 Got there early to secure a spot inside the shelter. I was first! But the wind was too westerly in the first part of the morning, so rather few birds and pretty distant.  And it was bloody freezing. From about 08:30 the wind became a bit more northerly and birding improved somewhat. Still, less than I had expected though things did improve in the afternoon and are expected to be even better tomorrow morning. When I will be at work.
So what did I see? Highlights were one Little Auk, one Arctic Skua and 11 Bonxie, 5 Red-breasted Mergansers, 11 Red-throated Divers and one possible Great Northern, and almost 40 Snow Buntings flying west in a few groups along the shingle without stopping. Here's my eBird checklist with the full list. Sadly I was so cold that I did not notice my camera settings were completely wrong. I screwed up a few seaduck shots. 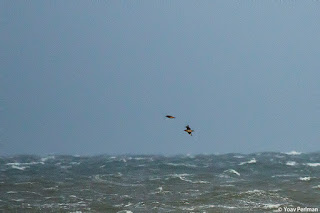 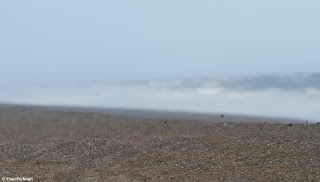 Had to leave early for family commitments. On the way out looked for brents but couldn't find any viewable from the road. Had a very quick scan through pinkfeet for something else but found nothing: 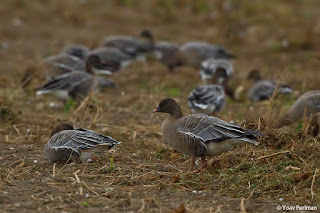 Seawatching at Cley is funny. It's actually two (or more) separate seawatches. Those inside the shelter and those outside the shelter, using the shelter as a shelter from the wind... Funnily, a good friend stood outside all morning, 5 meters away from me, and we both didn't know. Even inside the shelter some people stick their eyes in the scope and never call out birds or at best mumble something undecipherable - I wonder what those people saw today.
פורסם על ידי Yoav Perlman ב- 12:15 AM