Phew, what a day that was. Yesterday evening the news of an Eastern Crowned Warbler at Bempton Cliffs broke. I had planned a morning's birding with Terry a long time ago, which I didn't want to give up, plus I had stuff to do in the afternoon, so I peacefully (or not?) accepted that I am not going to see this mega bird. So as planned, Nick and I left Norwich early and met up with Terry and Marie at Warham Greens. We walked from Stiffkey almost to Wells. It was, well, alright. There were some thrushes about - mainly song and fewer Redwing, but one brief Ring Ouzel upgraded the thrush quality. Apart for that two Merlins, Peregrine, a large flock of 300 Goldies with no yank. During the morning I got a lift offer to see the warbler, but it was just too complicated for me to go. But then the news of a Black-browed Albatross from Bempton killed me and I had to go. That's it. I cancelled afternoon's plans and met up with Rob. The highlight of the morning, however, waited for us on the track driving out of Warham Greens - this surprising and very tame Snow Bunting: 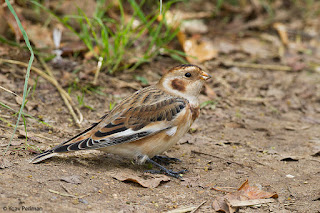 The 4 hour drive up to Bempton was alright, with news of the warbler still showing pumping us with Adrenalin. We got to the site, greeted some friends there, and waited for the bird to show. It had been absent for some time, and we spent another half an hour or so searching for it. And then it showed - what a magical bird. Phew. Wow. Boom! Besides being a monster WP mega, it is a sweet phylloscopus, very bright and patterned. Clean white below, bold and angular supercilium that reaches back almost all the way to the nape, bright green secondaries and rump, pale legs, that massive, pale-based bill, pale legs... And, oh, that crown stripe. Doesn't it sound like I am in love with this bird? Well yes I am. 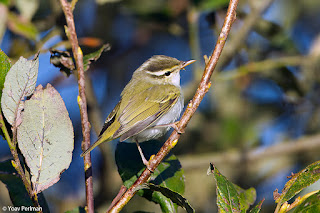 Sadly I am not in love with myself as a photographer today. The bird performed as it was expected to - it showed well, on and off, for the next hour or so, feeding actively in good light conditions, low down in the sycamores. But the combination of slow camera and slow photographer resulted in too many blurred, out of focus, badly exposed or simply empty images. I did not 'nail' it as I should have. But c'est la vie. I managed these half-decent shots, that together give a good impression of the bird. 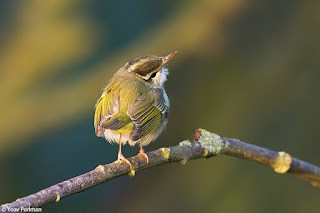 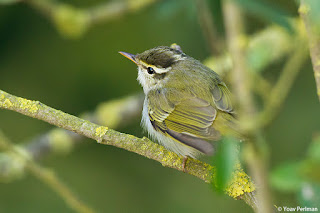 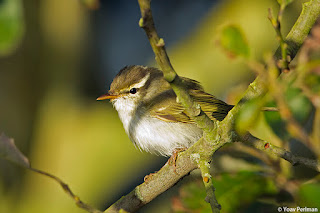 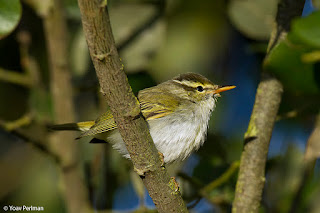 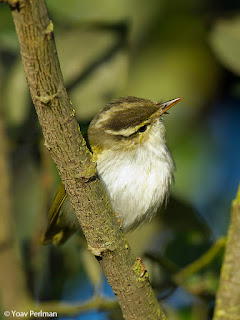 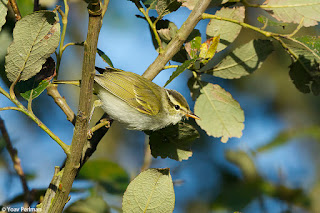 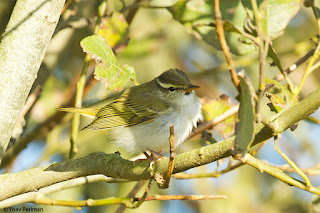 We did not see an albatross today, but there were lots of other birds about. Nearby there was a Greenish Warbler, but we didn't have time to go for it. A few Yellow-browed Warbler and many Chiffchaffs shared the same grove by the carpark. There were Redwing and Brambling flying around. Great stuff.

Hats off to David Aitken, RSPB Bempton Cliffs reserve manager. He found the bird, and his welcoming and friendly attitude made everyone's experience brilliant. Thanks David! And many thanks to Rob for the lift and driving. 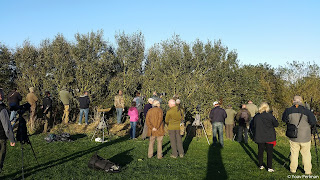