Today I went on my first international twitch. I Met up with Nick early am to catch a 06:50 flight out of Heathrow. Our original plan was to hit the rubythroat that took up residence in the small village of Hoogwoud, about 40 minutes north of Schiphol airport, since January 15th. Then head straight away to Den Oever right at the north of the peninsula for the Bufflehead and Lesser Scaup there.

Nice sunrise over the clouds 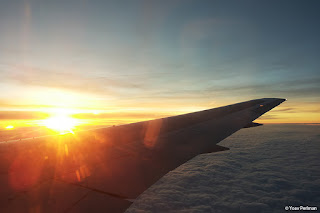 But our plans didn't really work as hoped. It started with a delay in picking our hire car up (don't hire from Green Motion! They're located a long way out of the airport, waste if time) and we waited even more time to meet up with my good friend Gert who accompanied us today. While we were driving up we got news that the rubythroat is still there, occasionally singing - sigh of relief...
We arrived at Hoogwoud about an hour later than we had planned. The weather was quite miserable. We positioned ourselves with the crowds - still many tens of people on site when we were there. We had OK views of it quickly - it was very shy and elusive, skulking in some thick undergrowth, like rubythroats should... But what a stunning bird! I understood that as long as it stays in the undergrowth I had no chance whatsoever to get a proper photo of it. So I sat down on the wet floor and waited for it to eventually come out of its hide and consume the yummy mealworms strategically placed for him out in the open. And I waited, and waited, and waited. Our precious time flied by. We had good views of a Blackbird, and a couple of cats, but Mr. Ruby continued to play hide-and-seek. We waited for long enough to miss the chance to see the wished-for ducks and head back to the airport on time for the early flight back, so we waited a bit more. And just a few minutes before we really had to make a move, wet and frozen, HH finally walked out of the shrubbery, gracefully climbed on 'his' log and posed for a few seconds of grace, to the satisfaction of the crowd of photographers. He appeared out in the open twice, each time for about 10 seconds, but I was pretty well positioned and I am rather pleased with my results from this very brief but very exciting encounter: 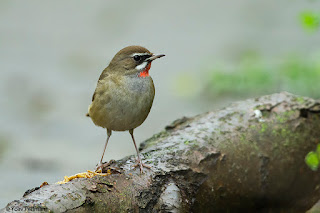 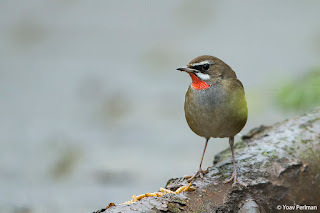 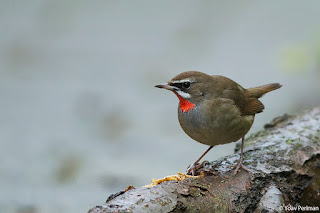 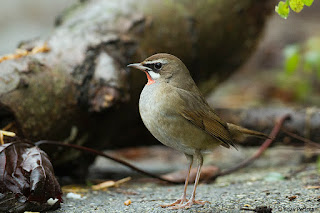 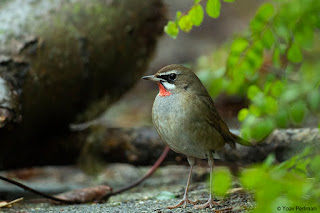 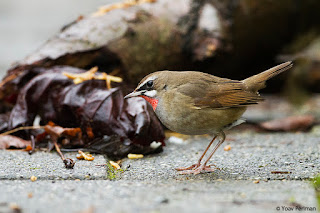 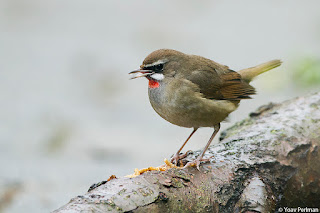 And that was that. We had to rush back to Schiphol to drop the car off and make it to the flight (that was delayed...). Good to meet Vincent on site - I hope he got some good photos too.
I have seen many Siberian Rubythroats in SE Asia in the past but this was a WP tick for me. Hoped for one in Shetland in October but no luck. Non-twitchers and non-listers would not understand why I went on this half-day trip to Holland for one single bird, but those who are surely appreciate the quest to see the Holy Grail of Siberian vagrants in the WP.
So apart for the rubythorat we saw little else. It was nice to drive on the highways and see everywhere large flocks of geese - mainly greylags but also a few flocks of whitefronts and barnacles.
Many thanks to Nick for the plan and company, and to Gert for all his help before and during the trip.