My tribute to Martin

Any birder who's on social media must have noticed the passing of Martin Garner. Many people have written wonderful words about him. I wrote something on Facebook as well, but that type of media is somewhat limited in how much one can write. So I will use my blog to tell, in some length (sorry), a bit more about what Martin meant to me.
I first 'met' Martin in December 2011. It wasn't a real meeting yet, but as often birders do nowadays, Martin contacted me after he noticed two interesting White-fronted Geese I had photographed in Yotvata and posted in my blog. Of course I knew nothing about White-fronted Geese, and Martin took my goose shots and made something delicious out of them. We then started communicating more closely about interesting birds in Israel. Few months later, in March 2012, Martin was invited to our Eilat Bird Festival. Before the festival I persuaded Martin to come and spend some days with me. It was sort of weird, to invite a person I had never actually met before to stay in our house. But my wife was kind of used to that, and as soon as had Martin entered our house he was so welcome and I think he felt that. Back then my children couldn't speak any English at all, but Martin found a way to communicate with them through laughter and play. It was beautiful, and my kids did not forget that several years later when we met again in the UK.

Together with Rami Mizrachi, photographing this Basalt Wheatear, one of the highlights of spring 2012 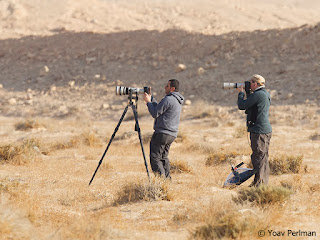 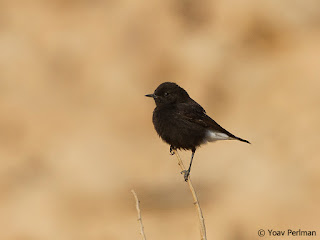 Martin's first invitation to the Eilat Festival was so successful. His talk was one of the best talks I had heard, and he really inspired everyone there. Luckily, it was one of the best spring migrations ever recorded in Israel, and Martin was almost shocked by the volume and diversity of birds. I think he really understood then the potential Israel has as a frontier for bird identification. Martin's first visit resulted in two more invitations, to the autumn Hula Valley Festivals in 2012 and 2013 - both were tremendous for me, for us as the Israeli birding community, and for him as well I think. Before both festivals Martin came to stay with us again. In both cases my lovely wife forgave me for birding for several days before disappearing to the festival for a week, only because of Martin. It was always such a pleasure to have him with us, and the mutual friendship got stronger each time.

November 2012 - birding in the Negev with Tristan Reid 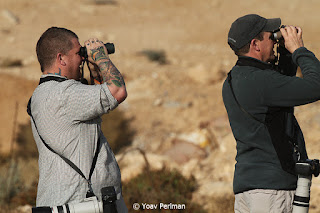 November 2013 - birding again in the Negev, where we studied Sibe Stonechats 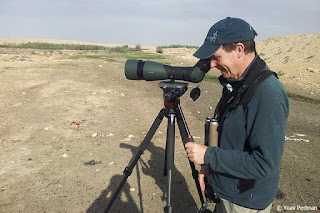 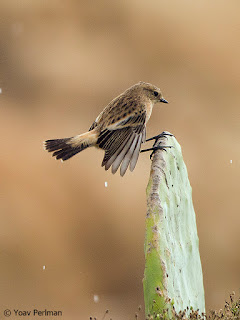 In early 2013 Martin invited me to join the Birding Frontiers team, or rather family. It took me time to understand, as Terry wrote beautifully, what was Martin's intention - not a selfish ambition to promote his blog by interesting content. Martin gave each team member the opportunity to grow, to expand, to become better, and Martin used his site as a platform for his altruism.

In January 2013 I had a week of meetings at the BTO offices in Thetford. In the weekend I asked some friend to join me for a couple of days of birding along the N Norfolk coast, not knowing yet that a few years later this would become my local patch. We had a super team that weekend - Martin drove all the way from Sheffield, Tris and Chris drove all the way from Cumbria, Tormod came all the way from Varanger, and Nick came all the way from Thetford... Back then I didn't appreciate enough the distances these guys drove over icy roads just to bird with me for the weekend. It was a memorable weekend, and as always with Martin, it was not only the birding but the enthusiasm and the fun and the friendship.

Chris, Tormod, Martin, Tris, me and Nick at RSPB Titchwell 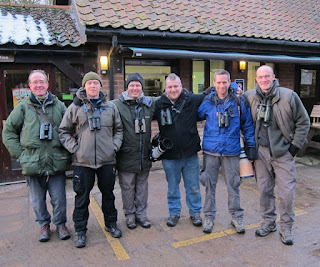 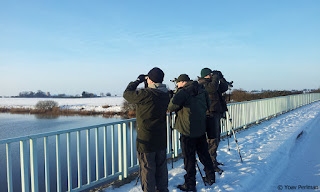 I was lucky to be involved in the two Challenge Series books Martin wrote - Autumn and Winter. Again, it was all about Martin helping others to become better birders, more knowledgeable, more connected to each other. My contribution to these books was rather minor - they are extraordinary books, and I think it is quite amazing how Martin managed to write them both, especially the second, Winter, when he was already very ill.

In the summer of 2014 I moved to the UK. Because of special circumstances the decision making process before coming was swift, but I did have some long discussions with Martin about the pros and cons of embarking with my family on such an adventure. Martin's words made me feel secure and confident, and indeed since I had arrived in the UK Martin spread a red carpet for me in the UK birding scene. The climax was my invitation to give the main talk at Spurn Migfest in September 2015. I arrived in Spurn just on time to hear Martin give the last briefing to the Migfest super team of volunteers. And he said nothing about birds. He talked only about people, and about how the human interaction will eventually affect the birding experience. I was moved by his words, and whenever I saw someone working so hard at Migfest to make every visitor happy, I felt the contagious effect of Martin's humanity. The way Martin was excited about the Young Birder competition was incredible. He was a great teacher and mentor, and I guess he identified himself in these talented young birders, developing their skills and looking for mentors. 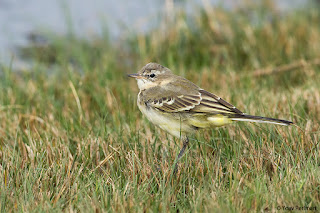 Martin with Ray Scally, artist of the Challenge Series books 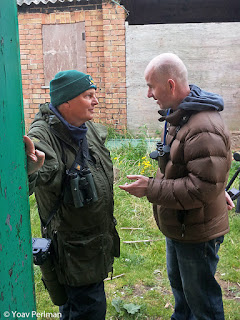 In May 2015 I drove up with my family to spend a few days in Flamborough. Martin was not feeling well, but I did manage to spend time with him birding and our families spent time together (not birding, mostly...). Apart for the lovely time we had together, Martin introduced me to some other great local guys that instantly became friends. That was another unique character Martin had - to create these networks, those links between people. He was so good at that. He simply said 'I think you should meet Mark'. He made it happen and that's it. Done deal.

Seawatching at Flamborough Head. Martin was so happy to be there. I was too. 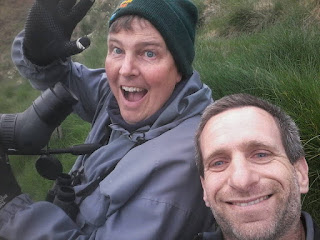 Martin looking at fossils with my sons, Selwick's Bay, Flamborough 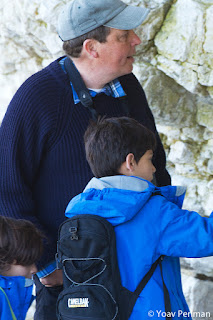 Since we first met, Martin talked to me about Shetland, and made me want to get up there. In autumn it happened, and I went up with Martin and Sharon to spend a week with good friends there. It was an emotional roller-coaster of a week. The trip started with tears, as Martin got off the train in York and remembered how exactly two years before he had first encountered his cancer. Somehow we managed to make it up in one piece. Instead of resting, on the first day on Shetland Martin joined me for a crazy day. Boom! We just went on and on all day. It was a stunning day, with so much to see and then write about. The rest of the week was very difficult for Martin and Sharon. On the one hand we were together with amazing people in this incredible place. But Martin was restricted to very short local walks, and it was very difficult for him. Especially when he saw me and the others running around and he just could not join in. We both cried when I helped Martin climb over a fence and jump over a small ditch to look for a Bluethroat I had just found. Martin knew then better than me how bad his condition is. I tried to encourage him and motivate him - how amazing it is that he is up there, on Shetland, climbing over fences and jumping over ditches, but I think he understood then that his is losing the battle. He started crying and I joined in. For me it was an amazing week. Again, Martin laid a red carpet for me and connected me with the 'right' people on Shetland, to create new friendship and collaborations. I appreciate this so much. 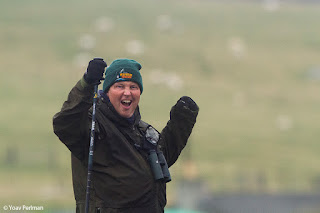 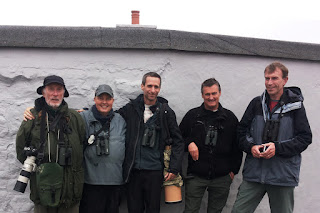 From there it was a steep downhill. What Martin first thought was just fatigue and pain as a result of the first strenuous day on Shetland was in fact a new cancer explosion in his body. I tried to communicate with Martin as much as I could, and helped a bit with his new book, but it became increasingly difficult to communicate with Martin, and I didn't want to hassle him or the family. In hindsight, the week we had together on Shetland is the best farewell I could have asked for. I saw there Martin in his high and low. Saw how much he is loved by Sharon and by his old friends. Saw his dedication and determination, but also his understanding of the nearing end. I feel privileged to have spent this week with Martin and Sharon, and will cherish this experience with me forever.

Rest in peace, Martin. May the people you touched and friendships you have created continue to make the world a better place, as you have done. I am humbled to call myself your friend. You really are, or were, a great person. Larger than life. Always giving, always sharing, always thinking about others before yourself. You gave me so much, supported me in difficult times, enthused me to be better, not to give up, to achieve what I was determined to. I hope I managed to give even a little back to you. I am not a believer (thanks for never talking to me about God!) but I hope that you are in a good place now. You found peace before you died, which is incredible. Now the physical suffering is over. I will always think about you and try to be a better person, for you. I love you man.
I send here my deepest condolences and love to Sharon, Abi and Emily.