Just a few more images to wrap up my events from Friday.
Black Bush Robin at Neot Smadar: with this short series of images I hope you can get the feel of this special bird. It kept hopping on the ground with its wings open and tail spread, sometimes showing agression towards a Masked Shrike or Rufous Bush Robin, but sometimes apparently just for fun. I have seen quite many Black Bush Robins in Israel before, but have never witnessed such remarkable behaviour. 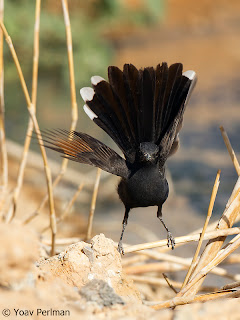 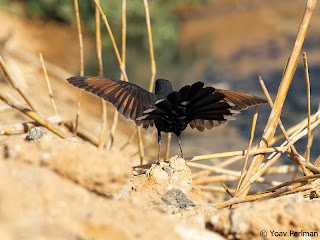 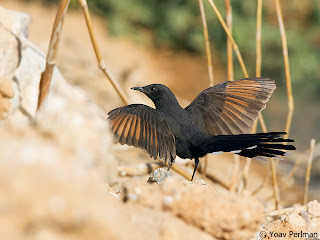 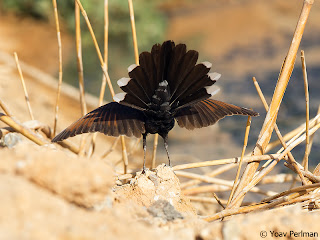 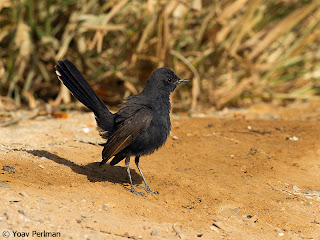 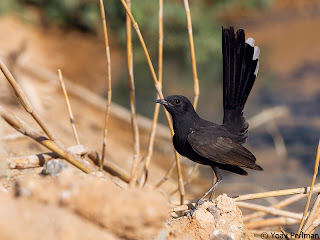 Some more words about the goldeneye. Eventually I had to go down and see it after a week it was on site. From the beginning I was quite certain it's a common (very easy to say now) - often I'd rather identify birds through bins and not through a magnifying glass. I mean than if one digs in too deep into microscopic features one might discover scary things about variation.
But after a few days some worrying indications made medecide to travel all the way to see it - interesting calls heard by Shachar and interesting response from David Sibley indicating it might be a barrow's. Something like an insurance tick in case it makes it way into the barrow's camp. Plus nobody managed a proper flight shot, so I had to save the day. In the field the bird seemed interesting indeed but not barrow's, especially after I got some proper flight shots. But, as always, great learning and some interesting points made by James Smith, Martin Garner and David Sibley who all know about goldeneyes much more than I do.
Other birds at KM19 included 1 Black-winged Pratincole, 2 beautiful summer-plumaged Ruddy Turnstone and the resident Bonelli's Eagle. 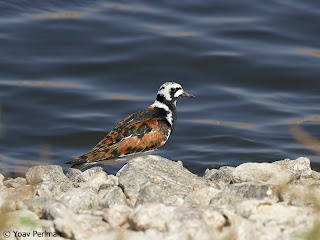 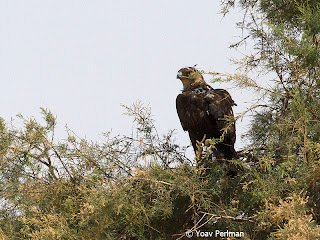