Another breeding pair of Black-winged Kites!

A few days ago Rafi Paz found a breeding pair of Black-winged Kites while bike-riding near Rosh Ha'ayin, in the E Dan region, just 15 minutes from Tel Aviv. The pair successfully raised three young; by their behaviour I guess they fledged about 2-3 weeks ago. Today I saw two youngsters; both parents and their big brother were missing. Could the parents be busy with another cycle already? The Hula pair did three consecutive and very tight breeding cycles.
The two birds were great fun - hunting in amazing success rate for recently fledged juveniles - during two hours I saw each one of them take at least three voles from the nearby field. Apparently they are very skilled hunters. Check the poor vole in this image: 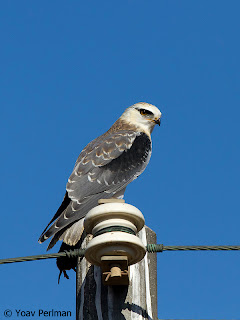 Photo-wise it was pretty difficult as mostly they perched on ugly pylons or wires, but only occasionally on trees. 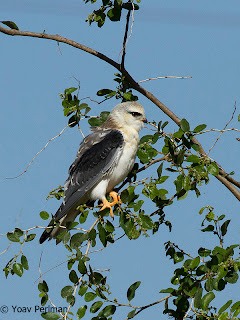 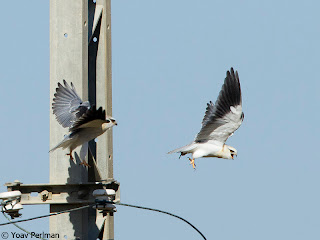