This morning I had a look at my local alfalfa field near Bet Kama. Haven't checked the site since mid-winter; even though the weather was disgusting (hot, strong wind, sand storm) there were lots of birds in the field - mainly Red-throated Pipits, about 200. While walking the field I flushed a female bunting - it was clearly black- or red-headed: large, no white in the tail-sides, pale grey-brown above, and plain below. I managed to relocate it several times after it landed in the tall alfalfa. I failed to see it on the deck and only had shit views on the wing. It kept flying from one side of the field to another. Eventually I lost it somewhere in the field.
The most important feature I noted was the call - a clear, soft, ortolan-like 'chup', which is very good for red-headed, rather than the harsh and explosive call of black-headed. It gave several calls each time it took off, so I heard the call very well. Unfortunately I don't have a recording system yet (Martin - still waiting for you to send me the details...). What I did see in flight was a yellowish rump (not rufous) - again better for red-headed, and a yellowish belly that means nothing.
My bottom line is that I think this is a red-headed, but this record is just not good enough for a rarities committee. It's mega rare in Israel (only two previous records) and it's a difficult bird to ID in any case, so all I can do is wait for better views tomorrow morning. I will be ringing in the field in a few hours so let's hope for the best.
This field maintains a high level of birding. In October 2011 I had a Blyth's Pipit there but again I was unable to 100% solid final complete clinch the ID because again I had crap flight views only, but very good calls.
Why can I not have a White's Thrush perched on a sprinkler? Why do I have to work so hard with these bloody LBJ's?
Just as an anecdote, I had a genuine first for my region - two Trumpeter Finches landed by a puddle for five seconds and then continued east. Locally cool stuff.
Wish me luck for tomorrow!
Ortolan - female 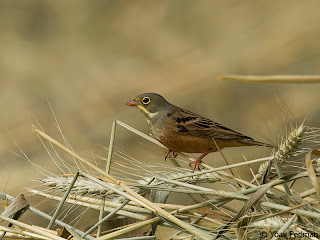