This morning I went ringing with Eyal and Yoram near Be'er Sheva. Eyal was expecting a big morning, and indeed at first light we started hearing thousands of ticking Blackcaps in the Eucalyptus grove. This was one of those days with huge numbers of migrants. I heard similar reports from other ringing stations and birding sites in Israel, so this migration wave must include millions of Blackcaps and other migrants.
What was interesting this morning was the absolute domination of Blackcaps - we ringed tons of them but almost nothing else. I hypothesize that during such massive and dense falls of one single species, other species that might compete over the same resources just disappear, perhaps to habitats of lesser quality.
Also interesting (but sad) was the total lack of colours in our catch - the most colourful bird was Nightingale.
In the field we had one Collared Flycatcher, and some Ortolans and Tree Pipits. 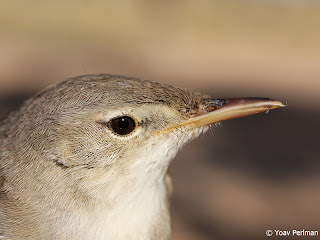