April 7th was a day to remember - one of the busiest and best days of birding I've ever had in Israel. I started off just after midnight. I had a guard duty in my village scheduled for last night. I was dead tired after a heavy Passover meal, and all I wanted to do was to go to sleeep. But instead I converted my guard duty into a night safari. I drove inside and around my village with a spotlight and found Scops and Long-eared Owls, Eurasian Nightjar, Cape Hare, Golden Jackal, Red Fox, and Southern White-breasted Hedgehog. I put a net up and ringed two Scops Owls. During the three hours I was out (00:30 to 03:30), there was non-stop migration of vocal passerines, mainly Ortolans (very big numbers) but also Tree Pipits and Yellow Wagtails. At about 01:30 suddenly I started hearing Nightingales singing from every corner in my village - they must have just landed. 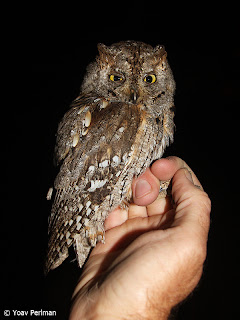 In the early afternnon I went to have a quick look at the Demoiselle Crane present near Kfar Menachem for almost two weeks now. It was still showing really well but it was very hot so I kept my distance from the bird. What a super bird. Look at that red eye! 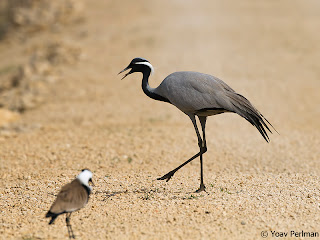 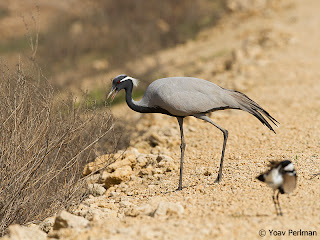 In the late afternoon I met up with three Catalan birders (Ponc , Ferran and Alberto), the IBRCE team (minus Kangoo that had broken down earlier) and Oz with Mrs at Neot Hakikar. We spent the last couple of hours doing some very productive birding. Highlight was Purple Swamp-hen - first record for this site and a good national rarity. In addition we had 10 Blue-cheeked Bee-eaters just before dusk. Nightmare to photograph but such beautiful birds. We saw all diurnal local specialties - Clamorous Reed Warbler, Dead Sea Sparrow and Namaqua Dove. 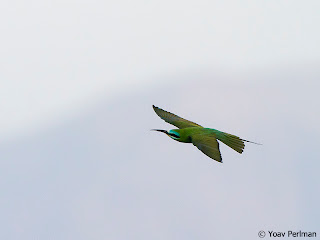 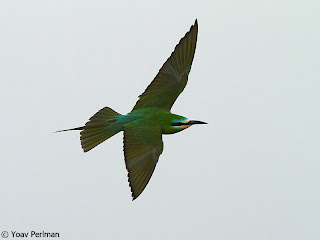 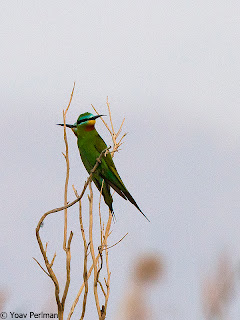 After dusk we had very good Nubian Nightjar activity, as expected on such a warm, full moon night. We really had a full moon party going on. We had great views of at least seven birds. All photographers were satisfied, even Ferran (-:  . Later on we even managed to ring one nightjar, and Fabian got his ringing tick. 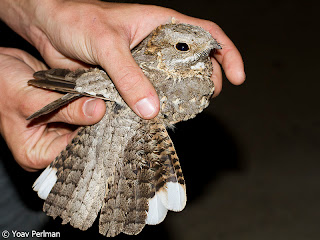 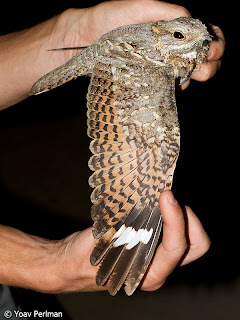 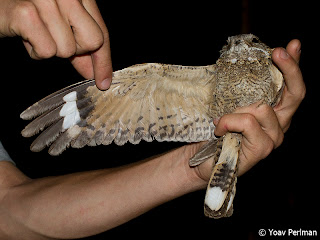 Later at night we checked a beautiful wadi in the Dead Sea region. We had breathtaking views of a male Hume's Owl, calling, flying and giving us quite a show. With the full moon and desert scenery this was an experience to remember. I gave Ferran my lens to use for the night because he managed to divide his own lens into two piecesearlier on. So I will have to settle for memories and images of others.
פורסם על ידי Yoav Perlman ב- 10:07 PM