Continuing yesterdays' taster, here is a small selection of images I got from the 'pelagic' trip with Avi Meir. I know that going out into a tiny gulf in a small dingy is not quite a pelagic, but this is the best we can get here in Israel.
Anyway, the conditions were great - soft wind, calm sea, comfortable temperatures, and as soon as the chum went into the water we got response very fast. The most active and attractive birds were Cory's Shearwaters - we had six or seven birds in total. They are such fantastic birds, and it was great fun for me to be in such proximity to them.
When I started seawatching in Eilat in the 1980's, days with 40-50 cory's were not uncommon, but their numbers have gone down dramatically in Eilat since the early 1990's. In fact between 2003 and 2010 hardly any were seen at Eilat. This decline corresponds with global population decreases, and with the ever-increasing pollution of the Gulf and crashing fish populations. This seems to be a relatively good summer for them.
I have hundreds of cory's images to go through, and I hope to get some on the blog during the next few days. This is just one more appetizer: 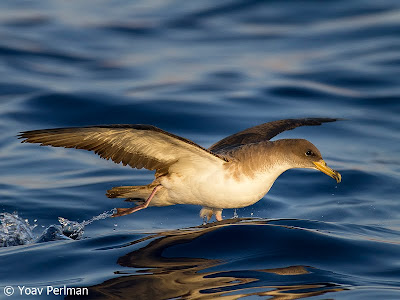 But apart for cory's, we had lots of other good birds. There were a few White-eyed Gulls flying around, but only this one showed interest in the breakfast provided by Avi.
This must be a 2cy, but I am not completely sure. As they're semi-tropical birds I don't know whether their moult cycles correspond to the Northern Hemisphere moult cycles we 'gullers' use when dealing with our gulls. This bird is going through its first wing moult, with P1 to P3 fully grown, and P4 growing. T1 to T3 also moulted (see 2 images below), and the new T2 and T3 have black tips. Leg colour is in fact pretty bright compared to juveniles that have dull grey legs.
I strongly recommend to have a look at the new page dedicated to White-eyed Gull in gullresearch.org, with images mostly by Avi and Amir Ben Dov.
White-eyed Gull (Larus leucophthalmus) 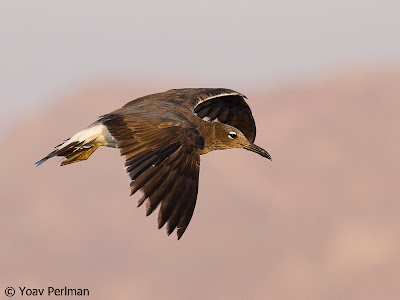 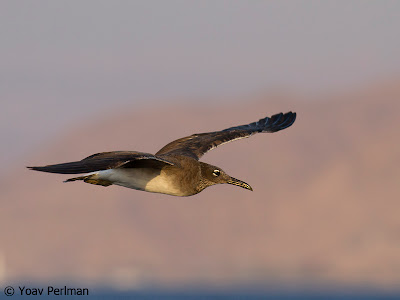 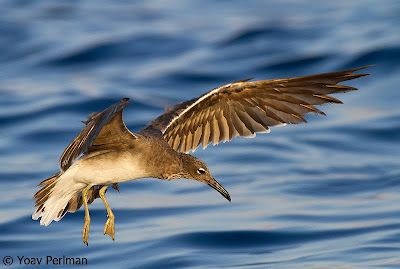 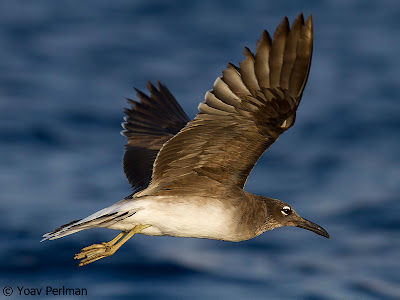 We had only one skua, this 2cy Arctic Skua. It made two brief fly-by's but never showed real interest in the feeding frenzy near our boat. It has not started moulting yet.
Arctic Skua (Stercorarius parasiticus) 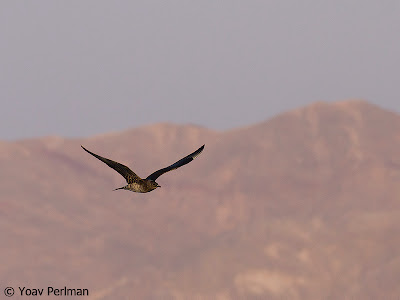 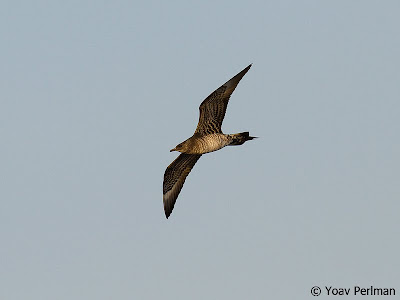 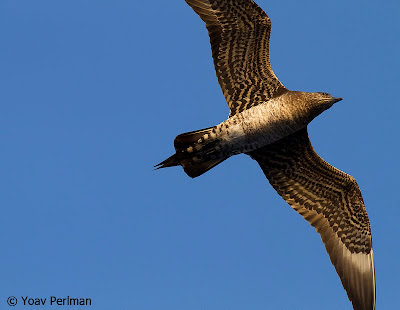 Towards the end of our morning session quite a few terns arrived. Most were Common Terns (about 25), and among them we had one or two Bridled Terns. This bird never got quite close enough, so I have only these record shots. BTW don't panic, the tern above is just a Common Tern in strong light.
Bridled Tern (Sterna anaethetus) 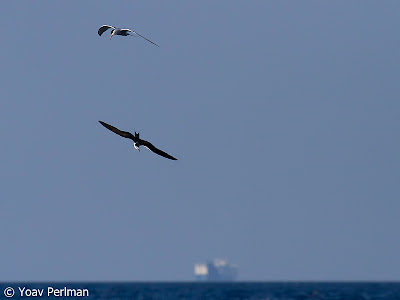 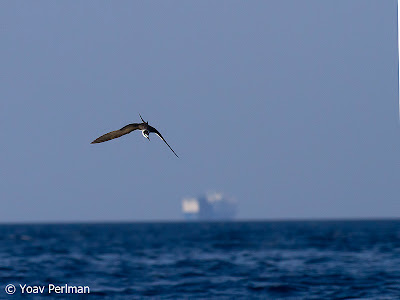 Common Terns did get close indeed: 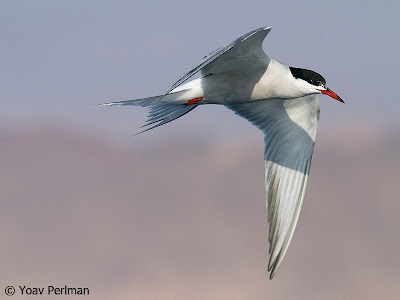 This 2cy Common Tern got me excited at first when seen from a distance - it was very pale and at first I thought it's an arctic, but after seeing it well it was safely identified as common. We don't get this plumage often in Israel; most of the 2cy's stay for their first summer somewhere in the southern oceans. 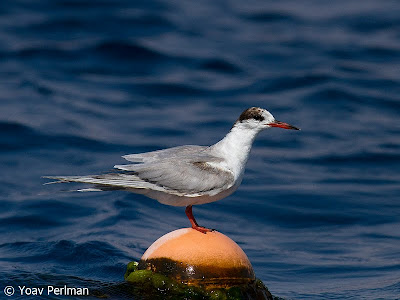 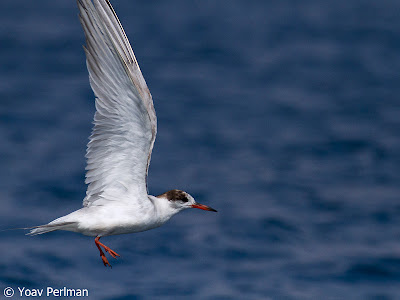 I had some trouble with my gear and screwed up its flight shots, so many thanks to Avi for this super image: 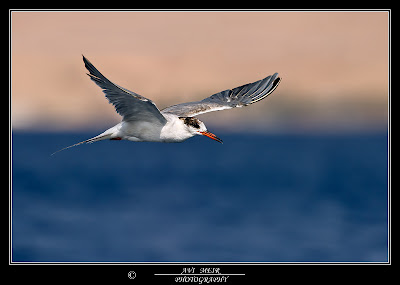 I really need a faster set of camera and lens, so if anyone out there wishes to donate me about 10000$ I will be very grateful.
Anyway, one Little Tern was among the larger species: 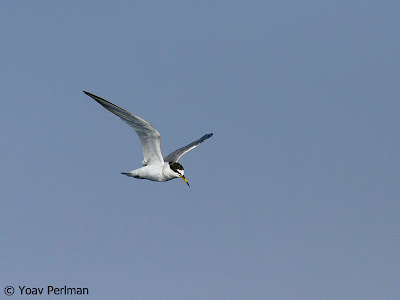 We had two Sooty Shearwaters. One of them came in to feed (pretty late when light was very contrasting already). This individual is rather scruffy and not very attractive, but they behave really nice compared to cory's - they just sit there and feed.
Sooty Shearwater (Puffinus griseus) 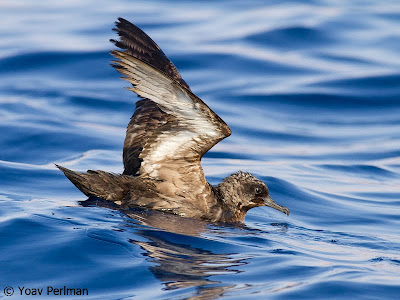 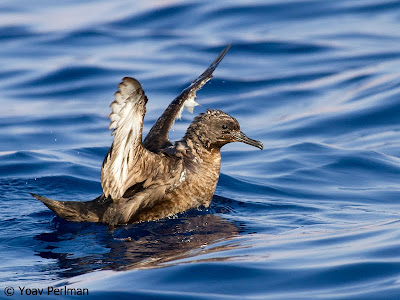 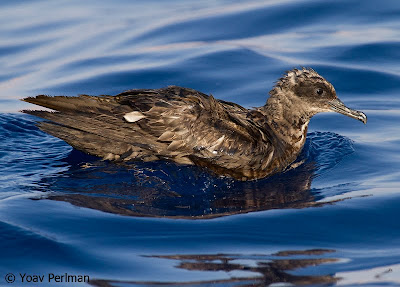