Had a terrific morning in the Nizzana region. I did an atlas box south of Ezuz, and birding was just great. First, I managed to confirm breeding of most of my target species in the box - MacQueen's Bustard (female with two chicks), Temminck's Lark (family), Black-bellied Sandgrouse (found a nest) etc. I was happy to find two singing Hill Sparrows - I wonder whether they are the vanguard of a large arrival like last year.
But even more impressive was a huge migrant fall, something I haven't seen this spring yet. Numbers and species composition were similar to what Barak reported yesterday in the Arava doing his box in KM76. I walked a few small and lush wadis that were just packed with migrants. Some figures for example - 60 Tree Pipit, 70 Masked Shrike, 30 Whinchat, 14 Pied Flycatcher, 8 Wood Warbler, hundreds of Blackcaps and other Sylvias. Also tens of Steppe Buzzards on the ground. 3 Blue-cheeked Bee-eaters overhead. This was very impressive, especially after the dead spring we had in the south up till now.
After I finished my atlas work I had time for a small ringing session near Ezuz. In addition to a selection of migrants I had four Spectacled Warblers - a bird I haven't ringed for a long long time.
Spectacled Warbler - male 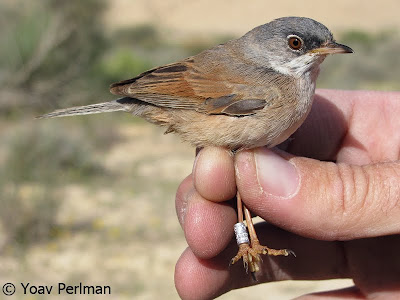 On the way out I paid a quick visit to the smelly Kmehin sewage ponds that produced this bright male Citrine Wagtail among lots of common waders. 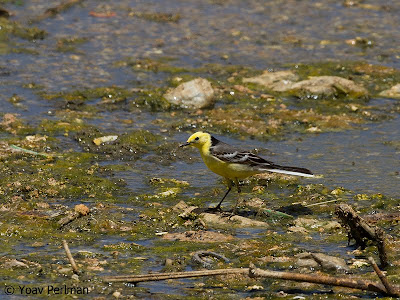 Driving back I heard that Amir Balaban and Avner Rinot ringed a Red-breasted-type Flycatcher at the JBO earlier this morning. I asked them on the phone to describe it to me and my antennae were raised immediately. It sounded to me like a perfect Taiga Flycatcher. As soon as I got back home to my computer I received images of the bird and clinched the ID while consulting with Barak. I am very happy for Amir and Avner - it's the 1st accepted record for Israel, almost exactly four years after I ringed the first also at the JBO (29 April 2007) which is still under review by the IRDC; well done guys! The bird was not relocated in the afternoon, but I will give it a try tomorrow morning anyway.
פורסם על ידי Yoav Perlman ב- 6:58 PM