What a useless day...
I began the day with a short seawatching session at Jaffa, following last nights' storm. I met Barak and together we wasted our time watching an empty Mediterranean. Before I arrived Barak had one Yelkouan and one Gannet, and after I arrived I contributed hugely to the scientific knowledge on our planet by finding another Gannet.

When I got to the office I got a call from Uri Makover. He had a funny 'black' wheatear in the north. I was busy and asked him the wrong questions, and got to the conclusion it was most probably an out-of-range White-crowned Wheatear.
Later Uri sent me images, and I wanted to shoot myself in the head! I called Uri and he told me the bird had a nice T tail band (eliminating white-crowned) and no white wing panel (eliminating 'Basalt' Wheatear). Half crying I ran to the car and made my way up north in the speed of light, while risking my marriage even more than ever. After a sunny morning, the weather deteriorated as I drove north, and when I got to the site at Kfar Baruch reservoir I felt like I was in bloody Europe - cold, windy and very very wet.
I met up with Uri and Shai and we started to look for the fXXXing bird which did not show. I don't know whether it moved somewhere or whether the weather was just too bad, but I had very little time and had to give it up. So after getting gloriously wet, I got back into the car and drove back home, defeated and tired.
I hope the other guys have better luck tomorrow, and that the bird sticks around long enough for a revenge...

This is a very interesting bird. We are left with Black O. leucura and Variable Wheatear O. picata (both with a single record, both Eilat 1982). Uri described the bird as not being especially big and bulky, and it does not look like that in the images - pro picata. But the brownish tones and the large white belly are better for leucura. I have no experience with leucura, and have seen picata in India in 1999, so if anyone out there has some useful comments on the ID of this bird, I'd be very interested to know.
These images were taken Uri Makover - thanks Uri for the images, and of course for this mega find! 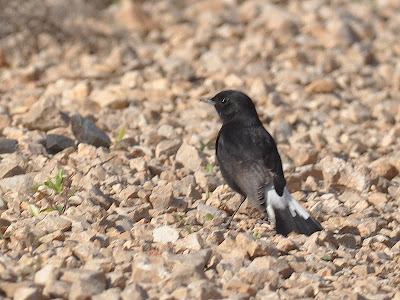 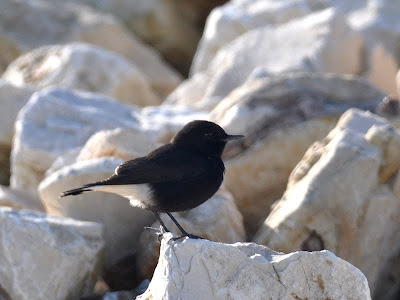 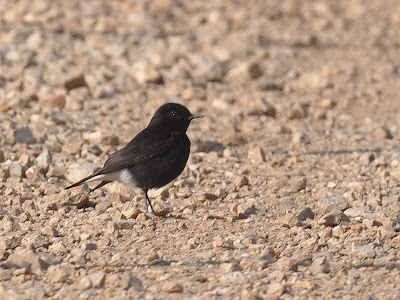