Another Global Big Day done and dusted for Team Champions of the Flyway: Jonathan, Re'a and me. This time it was a bit different. Several factors affected our decision to focus more on quality rather than on quantity:

1. Late date, May 14th, meant that here, in more southern latitudes, migration is almost over (hey eBird! Next year at the beginning of May, please!).

2. The late date translated into higher temperatures. We were unlucky with a serious heatwave hitting Israel. Morning weather was OK but from noon weather switched to quite horrible.

3. Stamina, or rather lack of: After several years of doing die-hard big days for Global Big Day (see our recent effort in October 2021, for example), we (I?) lacked motivation to rock it in full blast for a full 24-hr effort.

Re lack of stamina, we met up at 02:30 and headed north. First stop was in the Hula Valley, where the pre-dawn session produced three owls: Tawny, Scops and Barn, plus quite many Eurasian Nightjars. We also encountered four different Jungle Cats; one of them, in the picture here snoozing on a wheat bale, had a GPS-collar on, attached by INPA researchers. 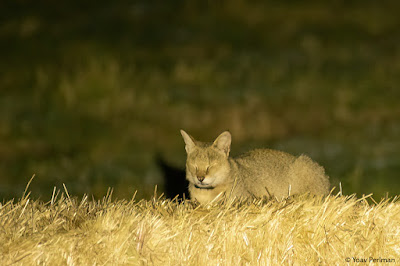 Can't believe I took, downloaded and edited this photo of A Eurasian Nightjar 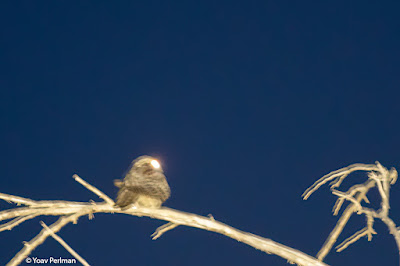 At dawn we were joined by Nadav. Together we birded around the Agamon Hula park, which was OK but lacked migrants. Still, we got lots of good stuff, including Marbled Teal, Black Francolin, Golden Oriole, Lesser Gray Shrike, Dead Sea Sparrow and many more. Jonathan was responsible for social media. 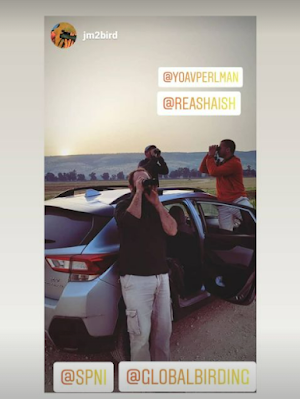 I was responsible for birding 😉
This Red-backed Shrike looked very posh in the early morning sunlight: 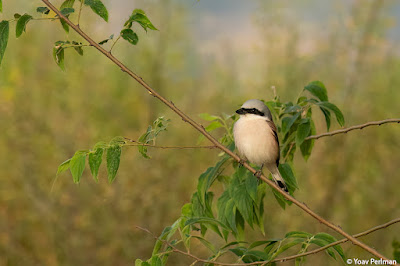 Most interesting birds of the morning were Rosy Starlings. It is a scarce bird in Israel. Typically, in Mid May, small flocks of Rosy Starling arrive to Agamon Hula to feast on mulberries. Several small flocks were reported in recent days, and indeed there were starlings around. At first light we had a few singles flying over, then we bumped into several small groups, all very mobile. 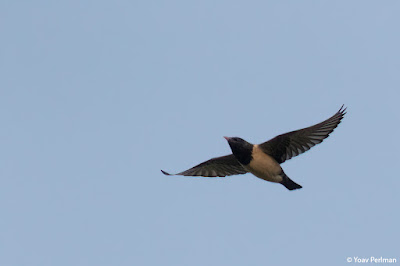 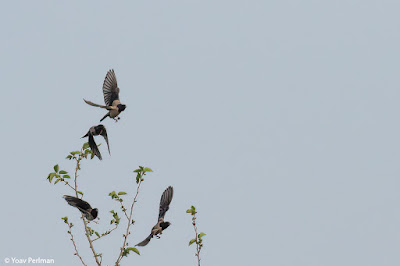 We left the Hula valley with 80 species, not bad I guess. Originally we had managed to obtain a special permit to visit Bul'an Valley in the highest section of Mt. Hermon, one of the most amazing sites in Israel for breeding birds, home to White-throated Robin, Asian Crimson-winged Finch and other wonderful and rare breeding species. See an example of how wonderful it is in this post from June 2019. This valley is normally off limits due to its proximity to Syria and security sensitivity, but for important survey work special permits are granted. Our original plan was to collect there valuable breeding data, not in big day manner, so we obtained the permit and were joined by INPA staff. The visit to Bul'an Valley was planned to be the highlight of our Big Day. Plans don't always materialise. When we reached the military checkpoint to the upper platform, we were refused entry. We were together with INPA staff but nothing helped. We wasted 1.5 valuable hours of morning birding at the gate, trying to negotiate with the military, without success. By the time we gave up, our motivation levels received a serious blow. We continued to bird around the lower cable station and drinking pools, and in fact connected with the Hermon specialties - Syrian Serin, Western Rock Nuthatch, Upcher's and Eastern Bonelli's Warbler, Rock Bunting, Eastern Black Redstart. But all of this birding was done with a soundtrack of our complaints and negative talk after the unplanned change in plans.

When I do Big Days my focus is on finding birds so my senses are devoted to that, and there is little time to spend on photography during such a whirlwind of a day. Therefore my photos from this Big Day are few and, well, not great.
Syrian Serin on the beautiful bloom of the hawthorn Crataegus azarolus 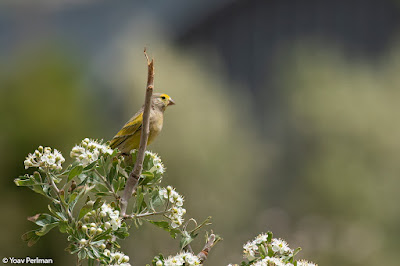 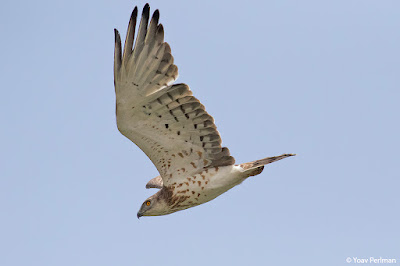 This year there was more snow than normal, later into spring, so spring development of plants, arthropods and breeding behaviour of birds seems to be late. There were certainly fewer butterflies than I'm used to this time of year. Frayer's Fritillary was the commonest: 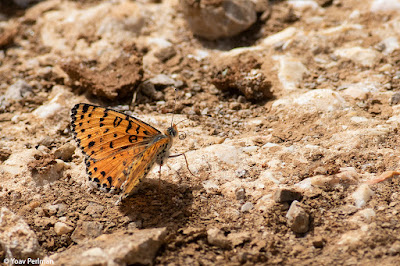 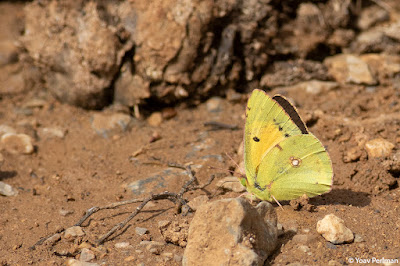 After we were done on Mt. Hermon we headed down to the Golan Heights, picking up specialties and stuff along the way, including Chaffinch (very localised breeder), Calandra Lark, Great Crested Grebe (only a handful of pairs breed in Israel), Black-headed Buntings.
Calandra Lark looking away - they breed here in vineyards 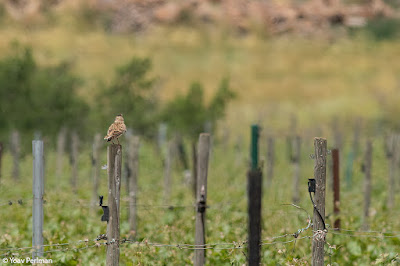 After midday the weather deteriorated fast. The temperatures rose to 42 degrees, and the wind was horrible. We likened the weather conditions to the hot wind coming out when opening an oven door on turbo mode. It was really nasty. A stop at Susita was close to torture, though somehow we added there Long-billed Pipit and Blackstart. That was the end of our Big Day - we were quite exhausted by the heat, and found shelter in the air-conditioned car.
Our total for yesterday was 122 species, 16 eBird checklists. Our lowest score ever on a Big Day. Yet we saw some good birds; additionally, any day with a visit to Mt. Hermon is good a good one. And as always, we had lots of fun - thanks to my mates Jonathan and Re'a, and Nadav who joined us for the Agamon section. 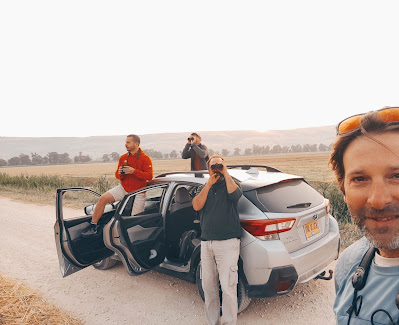 I created a Trip Report for yesterday's Big Day effort. I really enjoy this new feature by eBird - very useful and well designed. The link is here. 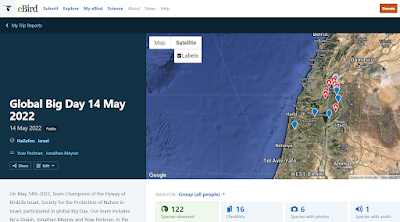