Over the last few weeks, a spectacular concentration of Eleonora's Falcons and other falcons has been discovered on Mt. Meron. First noted by Ohad Binyamini on June 17th (during a butterfly walk), it was soon established that the falcons are there to stay (for the time being), and that their numbers are unprecedented in Israel. Eleonora's Falcon is rare in Israel, despite breeding so close in the Mediterranean, in Cyprus for example. In recent years, small numbers were recorded in the northern Golan Heights and Mt. Hermon, but never more than 3-4 together. This year something special was discovered.

At 1208 m asl, Mt. Meron is the second highest mountain in Israel, beautifully forested in thick, evergreen Mediterranean scrub. The unprecedented numbers of Eleonora's reported there in recent days, up to tens together, lured me to go there yesterday. I left early, met up with Jonathan, and we arrived to the mountain when it was still cool - 17 degrees! 31.5 less than what I had experienced in Eilat a few days earlier. The mountain was coated by a thick cloud, the cicadas were still inactive, and as a result early morning falcon activity was very low. However, when the sun finally came out, many falcons started zooming around us, feasting on flying cicadas. Quite fantastic. First ones and twos, then threes and fours, then wonderful sights of 15-20 together. Unfortunately, the most impressive views were distant and in harsh light, so my photos aren't the best, but I can't complain. They are such impressive falcons - powerful, fast, amazing aerobatics, so beautiful. Most birds I saw well were 2cy (hatched 2020). Only one or two dark morphs were seen, and not very well. Hard to estimate the total numbers, must be several tens. 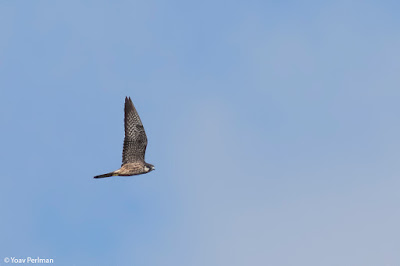 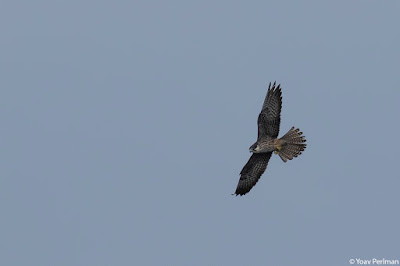 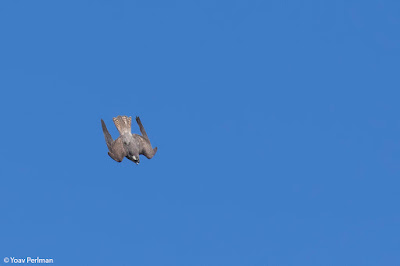 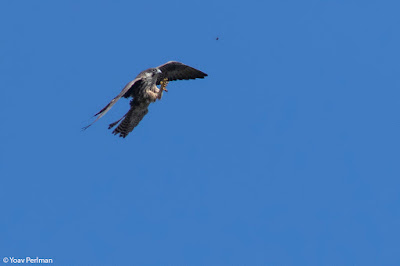 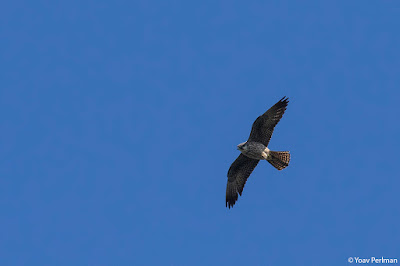 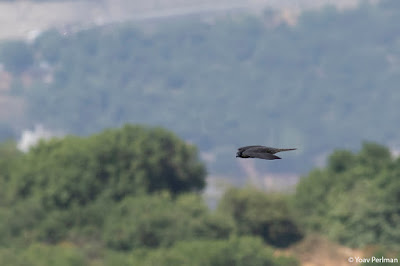 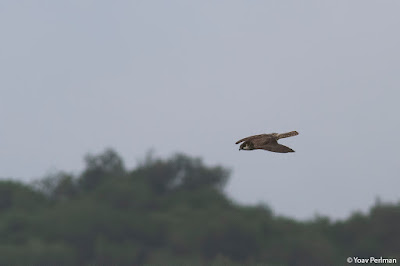 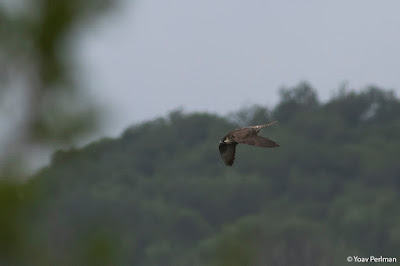 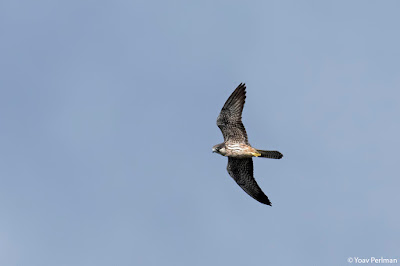 So what's the story this year on Mt. Meron? Is it really something novel, new? Or is this an annual event, that went unnoticed up till now? I heard rumours that the cicada flight this year is unusual, but have not seen data. In Israel, major phenomena can still go under the radar, due to the lack of observers in some parts of the country. So let's wait until next year to figure this out.

With the Eleonora's there were at least six Hobby, a few Lesser Kestrels and many Eurasian Kestrels. No sign on the Sooty Falcon seen here in previous dats. 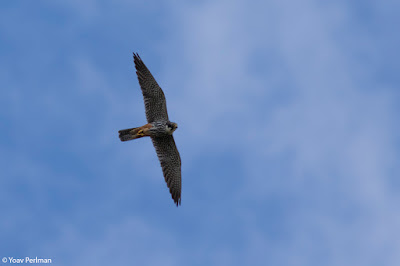 3 European Honey-Buzzards were seen, also an interesting phenomenon this year. They do not spend the summer here! To my eyes, most surprising and impressive was a displaying male European Honey-Buzzard - never seen this before in Israel. Too distant for photos. So beautiful however, gliding with raised wings flapping rapidly. There are no known breeding records in Israel. Could they be breeding in the region?

General birding was not too exciting, quite many Eastern Bonelli's Warblers, one Chiffchaff (local breeder or dispersing from Mt. Hermon?), and a few other bits and bobs (eBird checklists here and here).

Mt. Meron is famous for its butterflies too. It was quite difficult for me to divide my attention between the falcons and the butterflies. Still I managed to find Levantine Silverline that I really wanted to see (thanks Nitay for the intel), and photographed a few others. Levantine Silverline is one of the rarest butterflies in Israel, found only on Mt. Meron and in another relict population near Hadera on the Med Coast. Like other Apharitis/Cigaritis butterflies, they have an extraordinary life history linking them with ants: Adults lay their eggs on ant trails. Ants carry the eggs into their underground nests, nurture the caterpillars and collect honeydew that the caterpillars secrete. When the caterpillars turn to cocoons, the ants carry them to the nest entrance. When the adults emerge, they crawl out of the ant nest and into the open. Fascinating. 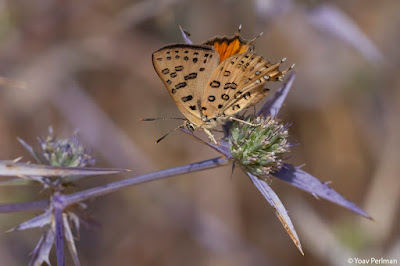 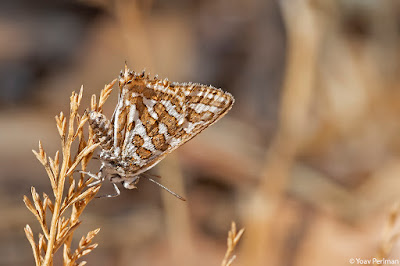 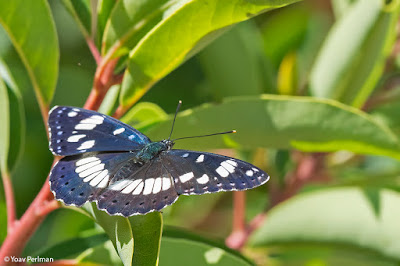 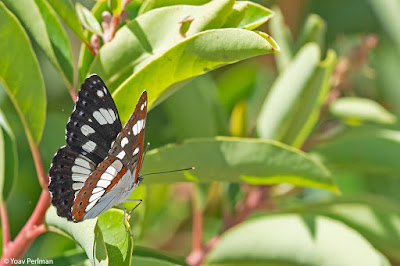 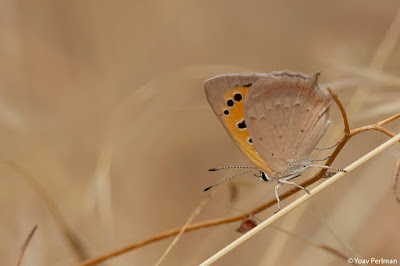 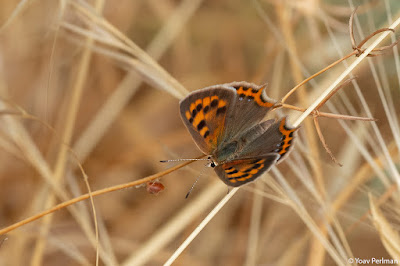 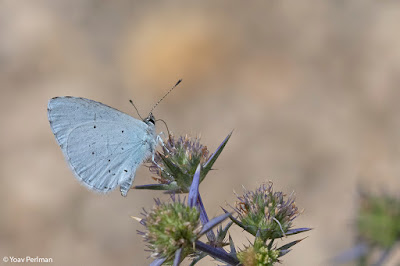 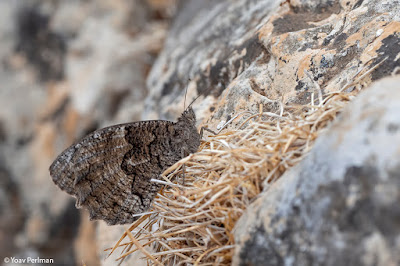 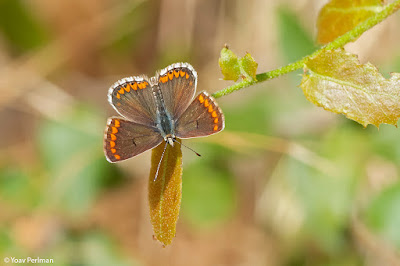 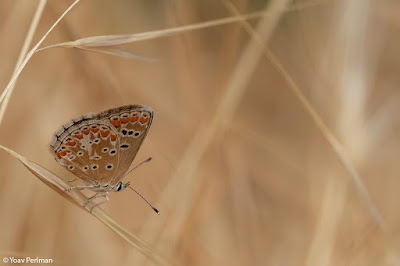 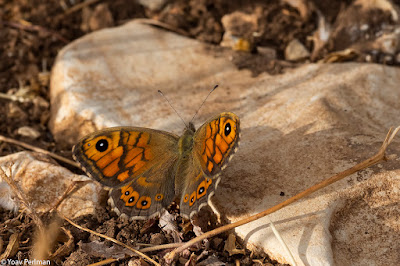 Thanks to Jonathan, Nadav and Inbal for a great morning!