If it makes you happy, it can't be that bad

This might be one of the most controversial posts I have ever published. I see this as an experiment, to test whether people actually read my words.

On Thursday, Dalia Hilkiya photographed an eagle near Beit El. She posted photos on FB, and later it was identified by the birding community, predominantly by Barak Granit, as a beautiful, blonde Tawny Eagle. It was seen on Friday, photographed very well by a young local birder, Yagel Yamin. I laconically released the news on social media:

Those who know me might wonder how come I didn't jump in the car and go to see it. First, I have seen two in Israel before, but never photographed one. What about my Big Year? Well, I'm doing it using eBird, and in eBird I try to see as many species as possible in Israel, or 'IL' as it's known in eBird. Beit El is a large, well-established Jewish settlement in the West Bank, or Samaria, or Palestinian Territories, or call it whatever you want. In eBird it's 'PS'. Some birders are pissed about this. I am less so. In any case, this eagle wouldn't count for my IL Big Year list.

This morning I decided to go for it anyway, because it's such a sexy-looking bird, and because it's such an excellent bird in Western Palearctic context. Twitching is a problematic activity to start with, thinking of carbon emissions, climate change, and the pointlessness of adding birds to one's list. Add to this complexity the political mess between Israel and the Palestinian Authority, and it becomes almost impossible. I did consider giving this bird a miss, but then thought to myself that I might as well go and enjoy it.

I went with Piki, who decided to put his conscience on flight mode this morning. When we arrived on site the bird was already on show, perched on the perimeter fence of Beit El by the WTP. We joined the others and admired its beauty and royalty. It spent the hour or so we were there on the poles, not doing much, occasionally hopping from one pole to another or bursting into short flights, returning to the poles. We kept our distance, and the back-lighting didn't help, so the photos aren't great, but still better than nothing. 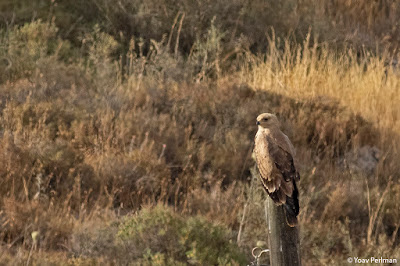 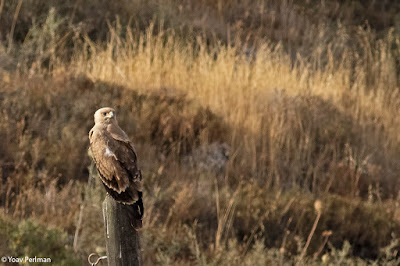 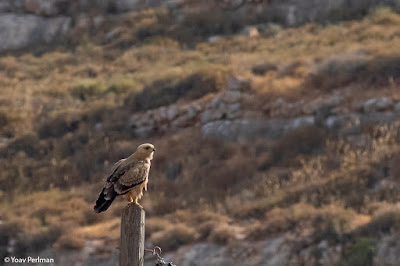 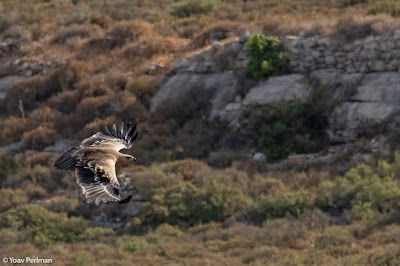 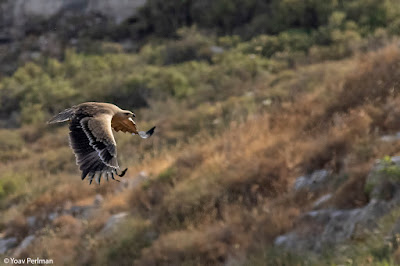 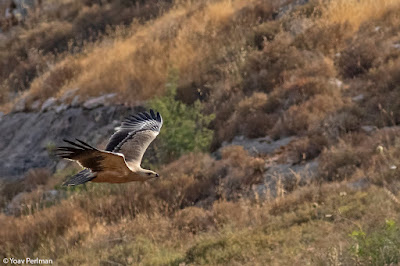 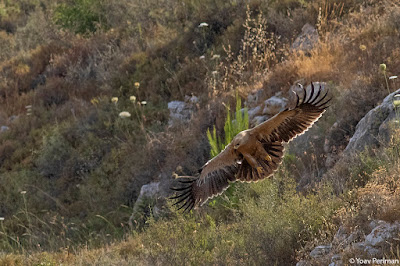 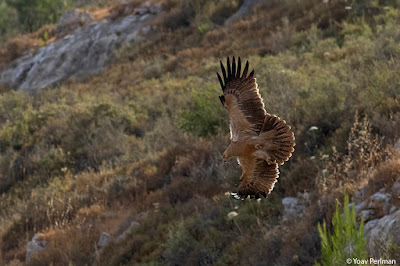 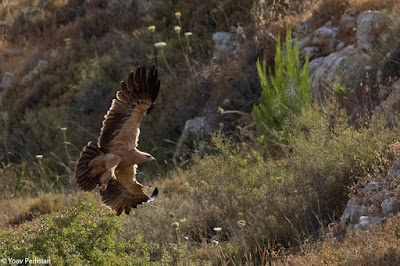 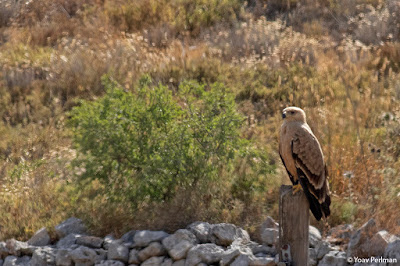 A couple of notes about ageing and ID:

It's a rather fresh juvenile, based on the neat trailing edge. It might have started to moult a few coverts and some body feathers, but overall its plumage is quite uniform. Features showing in the images supporting the ID are faintly-barred remiges and tail, paler inner primaries and outer secondaries, narrow upperwing greater coverts bar and no bar to median coverts, smaller size, shorter wings and longer tail compared to Steppe Eagle, yet more massive than fulvescens Greater Spotted Eagle. The gape line is very long, extending under and beyond the eye; the shape of the nostril is hard to see in these photos - could be oval with some imaginative forces. And this beautiful blonde plumage - the palest individual ever to arrive in this part of the world. I am not sure where our Tawny Eagles come from. There are three subspecies, one in Asia and two in Africa. In literature it is mentioned that the Sahel and S Arabia taxa belisarius is the one that arrives as a vagrant to the Middle East. I couldn't find a reference with information how to separate the different subspecies.

While waiting for the eagle to do something, we admired a Short-toed Eagle that emerged from a 4-species-swift cloud carrying a snake: 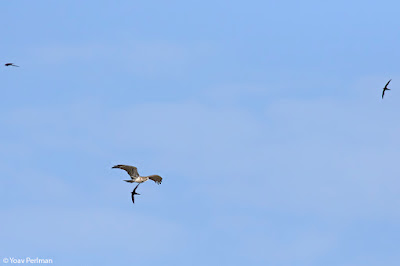 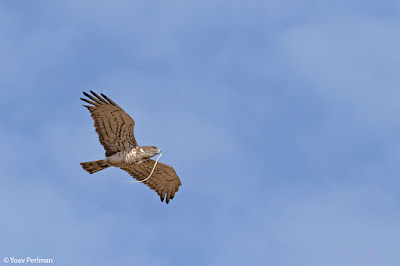 On the way back home Piki and I contemplated life and death, birding and twitching, peace and war, love and hate. Twitching this eagle felt so good, yet so wrong. We also contemplated whether it's a good idea to write about this twitch, and address the complexity - obviously too complex to address in a short blogpost, and potentially explosive stuff. I decided that it's worth a note, not ignoring the issues around this most bizarre twitch.

I can only hope that the eagle understands soon that it is away from its typical habitat (in Hebrew it's called 'Savanna Eagle'), and will descend to a safe IL valley such as Bet Shean Valley. There, the guilt level of twitching could be lower, or actually higher, twitching the same bird twice? Oh god please help me.