In most springs I spend a considerable amount of time in Eilat, around COTF - Eilat Bird festival, and other opportunities to bird in this incredible migration hotspot. This year, as soon as COVID-19 pandemic broke, COTF and festival were cancelled, and Eilat was sealed off completely to outsiders. Only on Thursday lockdown was lifted, and I took the opportunity to spend some time there with Jonathan. In the morning we actually did a ringing session at Ashalim Reservoir, in the southern dead Sea. 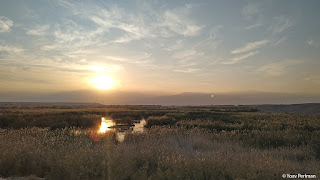 This site experienced a severe contamination event a couple of years ago. We're participating in a research that checks the presence of pollutants in feather of local birds. Ringing was somewhat slow, but this stunning male Collared Flycatcher certainly brightened our morning! 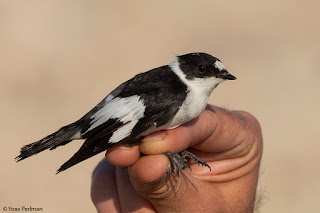 After we were done we headed south towards Eilat. We were left heartbroken after finding this beautiful young female Striped Hyena roadkilled. So sad. 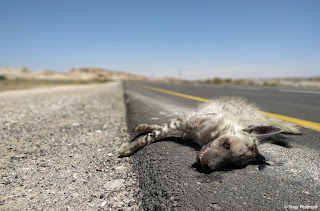 A quick stop at Yotvata produced many Blue-cheeked Bee-eaters: 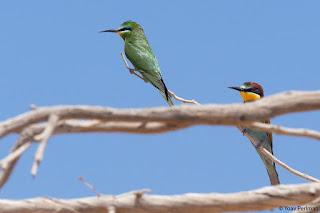 Down at Eilat, we birded the traditional sites - it was so good to be back. Passerine migration was a bit slow, bar Blackcaps that were everywhere. However, KM20 saltpans were exploding with shorebirds (eBird checklist here). There were lots of good species there too, including incredible numbers of Broad-billed Sands, Red-necked Phalaropes, and the star was a Terek Sandpiper found by Shachar: 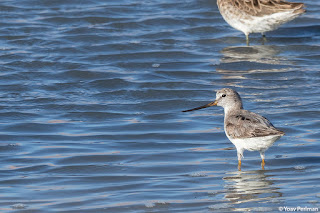 Jonathan and I did a live birding session for Swarvoski Optik. We had found the perfect spot, tons of close shorebirds, and just as we started the live session a Peregrine decided to land exactly there and flushed everything - frustrating! Still it was good fun. 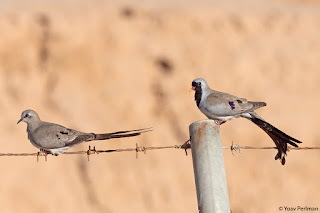 In the late afternoon there was a terrific descent of raptors to roost down in the valley, mainly on Aqaba side. Thousands and thousands of Euro Honey-Buzzards and Levants drifted low, in golden evening light - fantastic. One of the local Oriental Honeys was seen too. At dusk, seven Lichtenstein's Sandgrouse flew over IBRCE to drink in Aqaba, excellent end to the looooong day.

Next morning (Friday) we started off at IBRCE, where Levants were darting between the trees, leaving the small passerines startled.

Quite many Honey Buzzards had roosted in the park too. 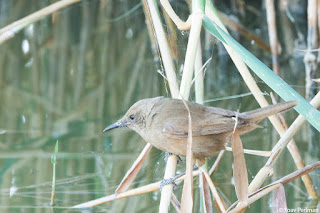 Rufous-tailed Scrub-Robin is such a cool bird 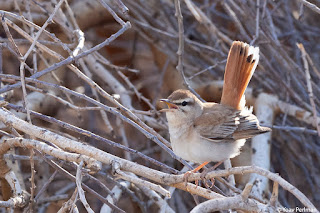 Back at KM20, the terek was still around, but despite trying really hard, we failed to pull some real quality out of the hundreds of Little Stints. Here are seven (out of 26) Broad-billed Sands, with some friends: 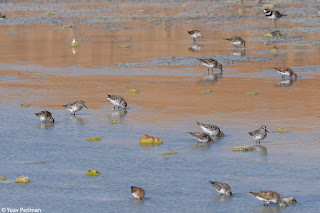 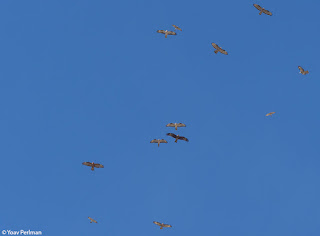 The raptors drifted north, and we followed them, leaving back home too early due to domestic commitments. Till next time...
פורסם על ידי Yoav Perlman ב- 9:06 PM