As part of my breeding bird atlas work duties, on Saturday I visited with Jonathan a wonderful, pristine desert wadi deep in the Arava desert. Our target was larks: In previous years with above-average rainfall like this year, this wadi hosted rare nomad breeding larks, especially Thick-billed and Arabian Dunn's. We arrived there at first light, and were greeted immediately by the sweet, melancholic song of Hoopoe Lark as soon as we stepped out the the car. A highlight of desert birding in Israel in my opinion. Before sunrise we had brief views of a lark with a dark tail - could it be Dunn's? Too brief, to be sure. But as we walked on and covered more ground, we found a pair on the ground, the male singing and displaying - boom! They were not easy to document, very shy and mobile. I managed to get a rubbish record digiscoped video - here are two videograbs: 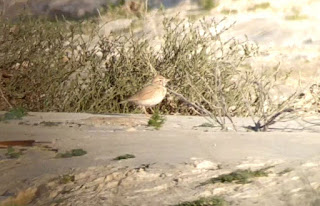 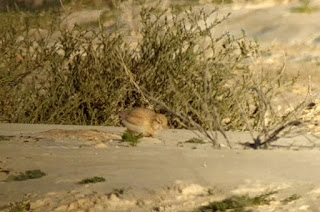 During the morning we had in total 5-6 singing males. Great to have them back - no breeding in Israel since 2015. Following our observation, singing males were found also by Itai and Meidad at a few more sites in the Arava and Negev, and there's an influx going on in northern and central Israel. Interesting to see how this season unfolds - whether this will develop into a serious breeding event or not. Where we visited, breeding density wasn't as high as in the famous 2010 breeding event. Hopefully, despite lockdown limiting our ability to explore desert regions, we will be able to get a better understanding of the scale of this event.

There were many other larks present, including Temminck's, Bar-tailed and Lesser Short-toed .Unlike the rather shy Dunn's, Hoopoe Larks were super active. We found seven breeding pairs, including confirmed breeding - highest density of this rare breeding lark I have ever seen in Israel. Because of their sensitivity, I gave them space and avoided close encounters, so not the greatest photos.

Compilation of a displaying male, sadly the camera lost focus on descent 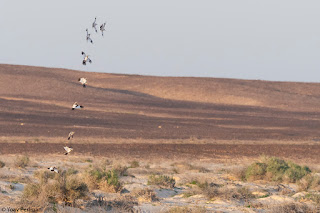 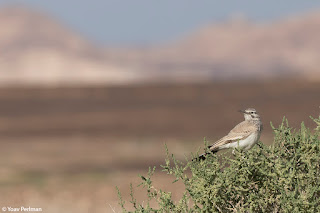 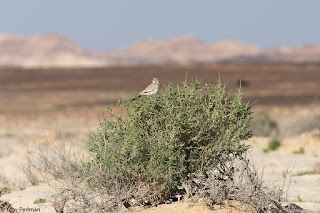 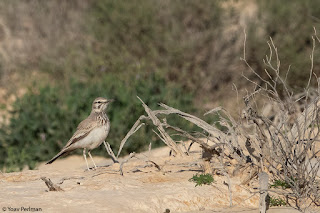