Yesterday I worked in yet another remote wadi deep in the desert, this time in the high Negev Mts. west of Mitzpe Ramon. Same routine: leave home at silly o'clock, drive deep into the desert on rough 4X4 tracks, then walk the polygon and do point counts. Then drive back to road, and back home. Routine might sound a bit boring, but when I am treated to scenery like this, I can't complain: 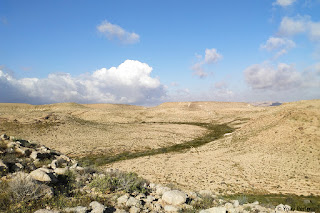 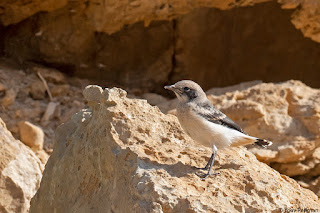 All along the walk on the hills, good numbers of Tawny and Tree pipits, and Ortolans were moving around. As we descended from the hills towards the lush wadi, it became clear that there's a big fall of migrants. The first Collared Flycatcher was spotted perched high up on a cliff. Then another, and another, and another, all in non-habitat, a small grassy wadi with scattered low bushes. Then quickly a Wryneck, Whinchat, Pied Fly, Wood Warbler, Redstart, nightingales, tens of Sylvia warblers - migration magic. More and more migrants kept showing up as we moved along the wadi. Scenes of five Collared Flys in one bush. Or another tiny bush hosting Collared Fly, Redstart, Nightingale and Wood Warbler. Like a total amateur, my camera battery died just then... While my main task was to record breeding evidence of local birds, it was such fun to dive in to this migration experience and forget all about breeding bird atlas...

One of many Collared Flycatchers 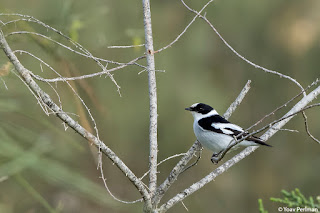 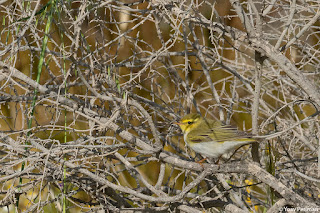 This fall of B&W flycatchers, possibly unprecedented, is generating a lot of interest in Israel:

Besides birds, there was some butterfly interest as well. I am not a butterfly expert, but the person I was working with yesterday is, and he introduced me to a range-restricted, interesting butterfly: Bladder Senna Blue (Lolana alfierii), that is specific to the bush Bladder Senna (Colutea istria), sometimes associated with the biblical Senna bush. 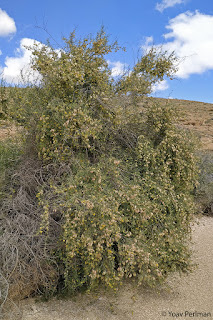 In Israel the bush and butterfly are found only in this region. The bush is now in full flower, attracting lots of insects and birds. Each bush we checked attracted tons of Sylvia warblers and several individuals of this little butterfly, though most were found perched on the ground besides the bushes. 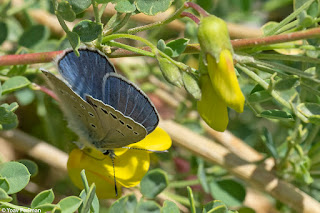 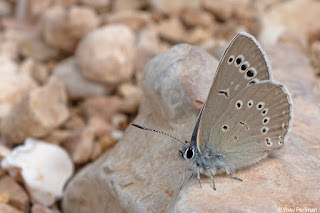 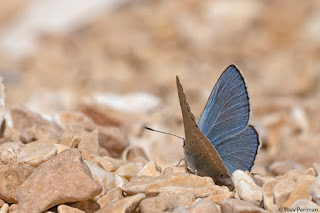 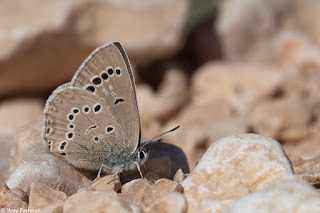