Yesterday morning I visited Tzurim Valley NP in north-east Jerusalem. It's a unique little urban wildlife site, a beautiful valley sandwiched between the Old City, Mt. Scopus and Mt. of Olives. The political context is so complex, but I do my best to focus on the wildlife and stunning scenery. In winter, its ancient olive groves attract finches and other seed eaters; the large deciduous pistachio trees are perfect shelters for these birds.


Panoramic view from the top - Old City and Dome of the Rock on the left, Mt. Scopus on the right

About a week ago my friend Piki found a lovey male Pine Bunting there. It's a traditional site for this rare winter visitor - until few years back, every winter a flock of 30-40 Yellowhammers would normally host one or two Pine Buntings. Sadly, the Yellowhammer flock deserted the valley, so this lone Pine Bunting observation was a welcome surprise. I have a long history with this species in Israel - I am old enough to have experienced decent numbers in the late 1980's. Every childhood winter in Jerusalem, I'd appreciate 15-20 Pine Buntings in a beautiful valley not far from the house in which I grew up. Now this valley is lost under concrete and asphalt. I clearly remember a flock of 70 Pine Buntings within a flock of hundreds of Yellowhammers up on Mt. Hermon ages ago - these sights and sounds are lost too. In recent decade both Yellowhammer and Pine Bunting numbers have dwindled considerably in Israel, and Pine Bunting has become quite a novice species, especially such a lovely male.

Back to late 2018, I had a plan to connect with the bunting, and hopefully even get a decent photo -  I had no photos of it in Israel. I even had an ambitious wish to photograph it with the backdrop of the Dome of the Rock... I met up with Amir early and we started working the valley down, together with a couple more birders. At first it was cold deep in the shaded valley, but some finches were already feeding on the slopes with the spectacular backdrop of the Dome of the Rock. 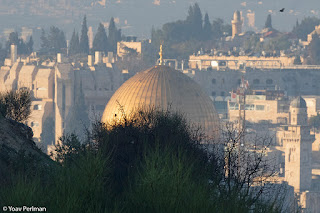 Then the sun started shining on the northern slope, bringing it back to life, and finch activity increased there. We worked the skittish finch flock down in the olive grove very carefully for quite a while, without a sign of the bunting. I had a flyover 'funny' serin - either Syrian or Red-fronted (their flight calls are very similar to my ear), a few Siskin, Dunnock, Brambling but the star bird wasn't on show. I sat down to eat my sandwich, then heard the familiar bunting rattle. Sandwich back into the bag, and I went around the corner to see THE bunting sat up nicely on a pistachio about 40 meters away. What a stunner! The deep rufous rump and horn-coloured bill shining at me, beautiful facial pattern so lovely to see. I fired off a few initial photos - this is a large crop: 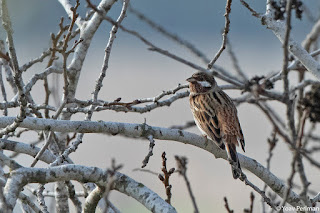 Then I figured out that a few steps to the left and I have my killer shot - bingo! 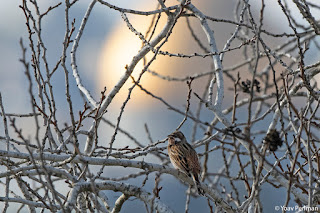 The bird perched for a mere 30 seconds, then flew off rattling for no apparent reason. I was joined by the others, and we had several more distant and rather brief views of the bunting - it was shy and mobile. But personally I can't complain.

Here it is, demonstrating its lovely rufous flank streaks and white belly: 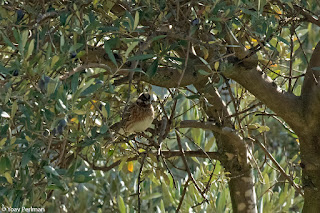 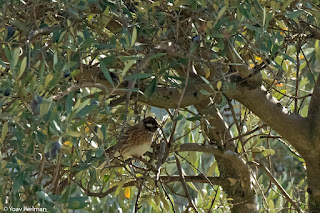 Feeding on the ground with a Chaffinch: 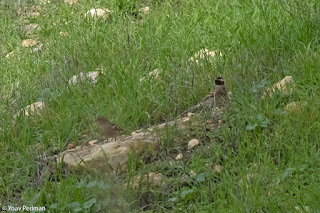 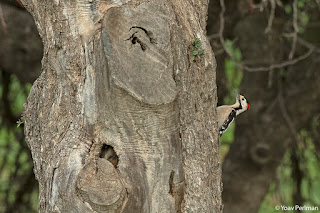 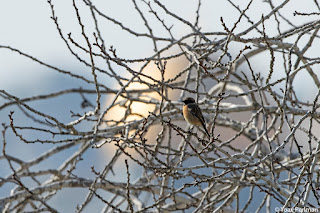 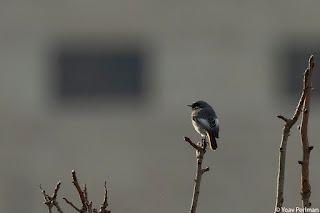 In the afternoon I had some work to do in the Dead Sea region - such a contrasting environment, only 30 minutes away. In one of the few unfenced date plantations several Mountain Gazelles were feeding: 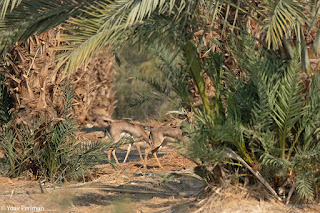 After dusk we had two Pallid Scops Owls calling nearby - no views. Can't wait till June.
פורסם על ידי Yoav Perlman ב- 10:30 AM