In recent years it has become evident that poaching of large falcons takes place in the Western Negev, where every winter small numbers concentrate. Besides being catastrophic to the survival of species like the globally Endangered Saker, this activity is totally illegal. Our nature law enforcement agency, Nature and Parks Authority, invests considerable efforts to crack down on this activity, but they need support. In recent weeks, a group of volunteers patrols the most sensitive zone daily, and looks out for suspicious poaching activity. We have already found a bait pigeon, and provided information on several suspects that are being investigated.
Yesterday I spent several hours around where the falcons are, looking out for suspicious activity. I saw some birds too, of course. I was relieved to see two Sakers. I tried not to disturb them so these images are big crops: 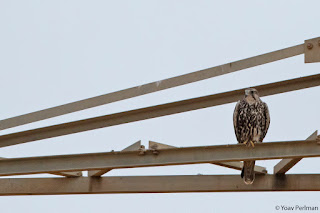 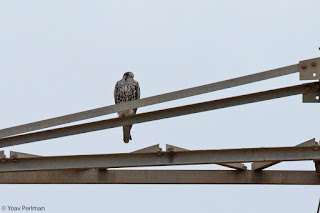 Only two Peregrines were present, one was a stunning calidus-type: 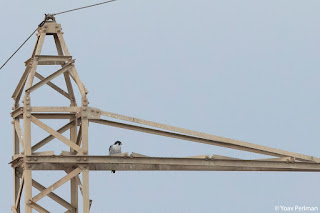 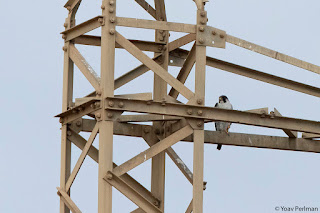 This year it has hardly rained there (again) - fields are very dry bar those irrigated. As a result, some species are present in lower numbers - I had zero harriers, and only one Merlin. There was enough Merlin food though - I counted 5700 Skylarks, and an impressive 450 Calandra Larks, including some tight flocks: 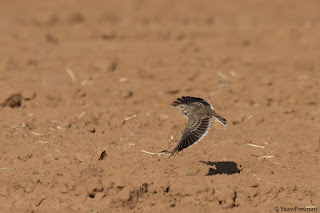 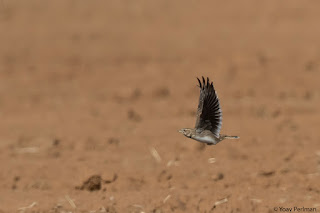 Mixed flock of calandras and skylarks

I searched for the ever-shrinking group of Sociable Lapwings - I saw seven sat distantly in the middle of a big field - no chance for photography with that killer heat haze. They are not doing great either - perhaps as a result of climate change that causes the continuous decrease in winter rainfall in this region?