Back in the game

It's been almost a week since we returned to Israel, and slowly (or too quickly?) I'm getting back into birding action. My journey to rediscover Israel's birds started with a lovely ringing session at JBO, producing typical early autumn migrants - Eastern Orphean and Eastern Olivaceous Warblers, the highlight being two Barred Warblers - an adult (2cy+) and a youngster (1cy): 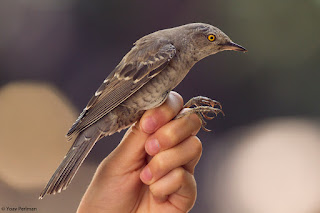 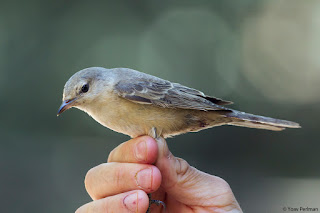 Then a quick evening visit to a water reservoir close to where we're staying now - some ducks and shorebirds at one of the ugliest but best birding sites in central Israel. Climax of the week happened yesterday, when I traveled down to Eilat with Amir. Our target was the Yellow-billed Kite present for the last couple of weeks. Most Israeli birders had already been down to twitch it, so there was no news about it, negative or positive, since Friday. We got to Eilat in the blistering heat of the early afternoon. A first drive around its favourite haunt, KM19 cowshed, produced nothing. A scan of the adjacent reservoir was negative too, and our hearts started beating fast. But then we spotted it as it flew up from the vegetation around the reservoir onto a lamp post - phew! First views were rather distant and into the sun, across the large reservoir: 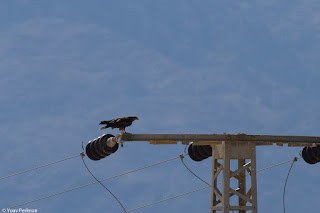 We drove around to get better views but the bird took off quickly (not because of us!), headed north, then gained height and disappeared far south - will it return? It's still in heavy moult, surely its aerodynamics aren't good enough to fly all the way back to Africa. 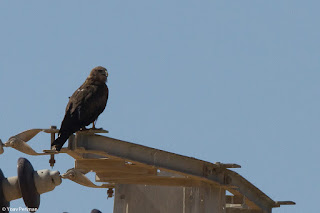 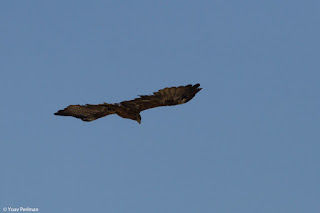 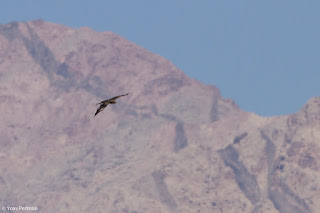 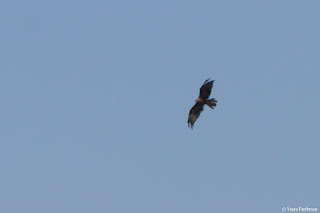 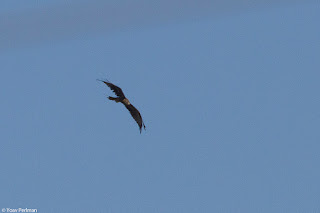 With a few hours of light to spend, we decided to do some recreational birding rather than head straight back. KM20 saltpans were rather birdy with quite many shorebirds, a Gull-billed Tern and good numbers of Garganey:

A short visit to North Beach was hot and not too exciting - only 7 White-cheeked Terns and White-eyed Gulls enjoying the many fish - there was a bit of 'sea boiling', not quite Scilly-style but still quite nice:

3 White-cheeked terns and a White-eyed Gull 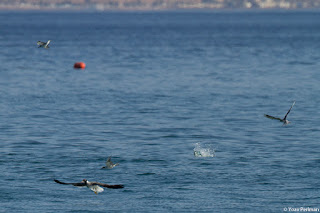 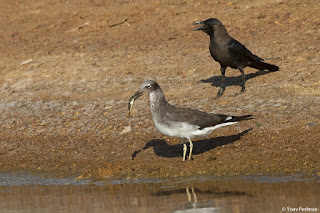 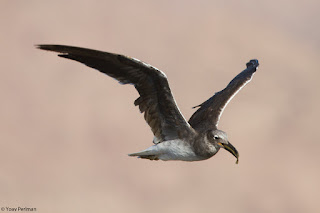 On the way back home a tip-off from Noam sent us to Samar where we enjoyed a couple of Black Scrub-Robins - sadly too dark for any photos but what lovely birds to end a great day.
פורסם על ידי Yoav Perlman ב- 10:43 PM