Time to start catching up... On February 10th we went out to sea with Trevor. At first it was unclear whether we will go out at all, because of a storm that passed through the region with strong winds and high swell. Eventually we decided to give it a go. As soon as we sailed past Cape Point the swell rose up to 3-4 meters. Not quite comfortable for a terrestrial birder like myself. I took cyclizine that certainly did the job and I felt quite OK all trip, but photography was not safe and easy. As we headed out towards the shelf drop we started seeing pelagic birds. Rather soon we encountered a large concentration of about 60 Sabine's Gulls. Brilliant birds. We were hoping to see more further on so didn't really stop to play around with them, hence the poor photo.

Soon we also found our first albatrosses - in fact the first one was an Atlantic Yellow-nosed. Again, we were hoping to find thousands behind a trawler, so we didn't stop for them. Eventually, we did not find a trawler - Trevor thought that they were not out because of the storm. We chummed a bit instead - that brought in only White-chinned Petrel - the most ubiquitous seabird of the day: 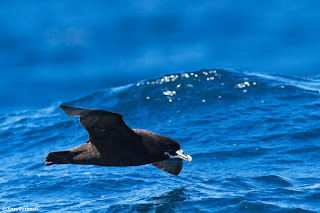 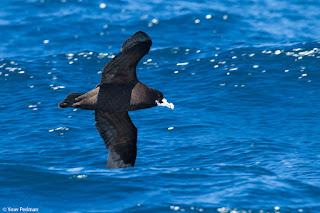 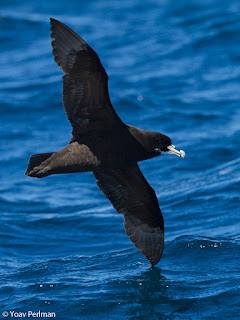 At about 15 miles off Cape Point things weren't looking very good. We couldn't find a trawler, and apart for myself all others felt very bad. So we decided to head back earlier than planned. Near Cape Point we spent some time with a feeding frenzy of hundreds of Cape Gannets, Sooty and Cory's Shearwaters and Cape Cormorants. Both Trevor and me thought we had a Flesh-footed Shear but it was too quick and views were not great. It got away.

Eventually the trip was less productive that we had hoped for. Still, we saw some good birds (see my eBird checklist here). I know that it's part of the game but we could not help feeling disappointed. It was great to spend more time with Trevor at sea - he and Harry the skipper did the best they could, but luck was not on our side that day. Thanks anyway to Trevor for this tough, but good day out.
פורסם על ידי Yoav Perlman ב- 9:09 PM