After a few days of holding on (barely), yesterday I gave in and went with Phil and Gabriel to twitch the Elegant Tern at RSPB Pagham Harbour in West Sussex. We had a great plan to get there and back without hitting traffic. But sadly an unexpected funeral at Church Norton added two hours to our itinerary. Walking down we met some disappointed twitchers who said they had spent 2.5 hours there without seeing the bird. When we got there and joined the small crowd, it continued to hide itself. Only after nerve-wrecking hour we had our first glimpses of the bird. Later on it did show better, but only in flight apart for a breef and distant preening session on the mud. Always distant, and the heat haze killed my photos. But a truly cracking bird. That never-ending, naranja bill; elegant flight on long wings (what an apt name 'elegant' is for this bird); white rump and tail; spiky crest - I was surprised how distinctive it was. A global lifer for me so obviously I was very happy. I did hope for better photos (like these stunners by Baz Champion on RBA Gallery), but hey-ho, can't complain.

All images are huge crops through horrible heat haze, so my apologies again. 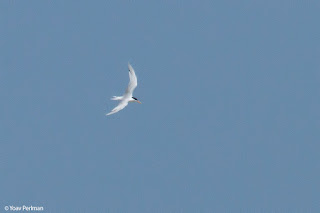 This is the uncropped image - huge distance 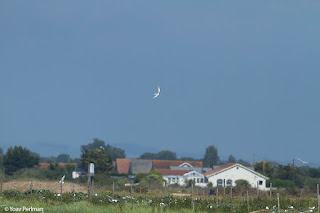 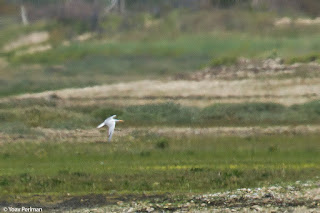 With a Med Gull - there were about 60 there: 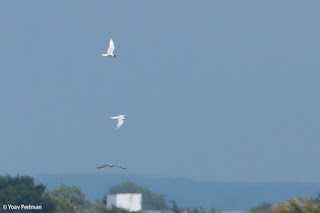 This individual bird has an interesting history. It was first seen in France in 2002, and bred in tern colonies in southwest France with Sandwich Terns. It was colour-ringed, and DNA analysis confirmed it to be a pure Elegant Tern. See also a nice summary here on Birdguides).

Otherwise not too many birds (still 60 species) in the harbour away from the tern colony. I guess it gets really busy there on migration and in winter; yesterday the summer lull was evident. But good to visit another new site for me in the UK.

Hats off to the local RSPB people for the conservation work they do in the colony, and for organising the twitch so brilliantly.
Many thanks to Phil and Gabriel for a sucessful twitch!