(I know James used this title a few days ago, but copyright is actually mine...)
This morning I left home at ridiculous o'clock to meet up with Alison and Chris. Our plan was a 5-diver-spp day and bonus Black Scoter. Our first destination was Druridge Bay Country Park in Northumberland for the Pacific Diver. I have a bit of a bad history with this species. In late April 2015, before boarding the Scillonian to twitch the Great Blue Heron, I scanned the bay and failed to find the diver there. Next day it was seen. A few months later, I had a seat in a car that went and saw it, but I couldn't go. So when this Northumberland star started performing, showing 'slightly' better than the Penzance bird, I understood that this is an opportunity I was not going to give up. Despite the long drive.
And a long drive it was! We forged through Newcastle traffic to arrive on site before 9, when the light improved and positive news already relaxed our tension. We got on the bird immediately, as it foraged offshore the visitor centre. What a great start to the day! WP tick #1. It was showing well all the time we were there, but not really close enough for proper photos. But I cannot complain. 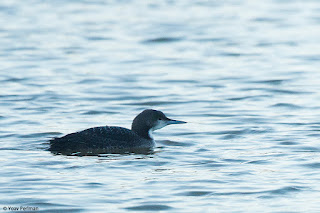 At some angles, chinstrap was sort of evident... I have seen more convincing chinstraps in my life, but hey-ho. We traveled so far to see it, so no doubts please... 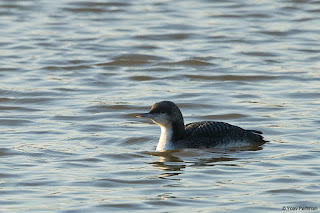 At some angles, head shape was not so round... But forehead is steep and bill is petite. 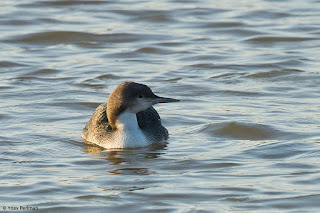 Here the massive dark flank and vent bar is evident: 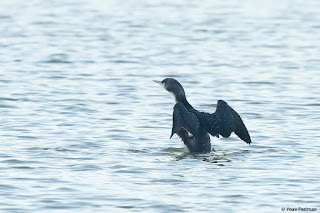 And then it was time to move on. Nice to see Tree Sparrows and Bullfinches in the feeders at the carpark 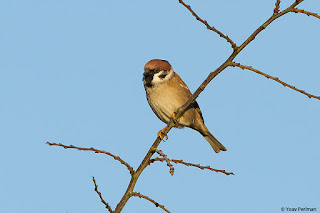 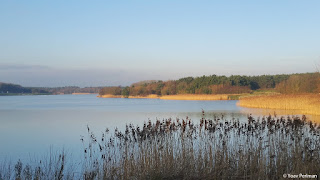 Our next target was the male Black Scoter at Goswick, about an hour north. We headed straight east from the golf club carpark. We joined some birders already on site, but there was no sign of him this morning. We worked hard, scanning back and forth. There were tons of seaducks, and there was clearly stuff moving around, but no show. The sun was bright and brilliant, and the frontal views of yellow bills of male Common Scoters fooled us, but no sign of the real deal. We split after a while, I went south, also to try and photograph a 2cy Glaucous Gull that didn't cooperate, and I scanned the south side of the bay. Nada. 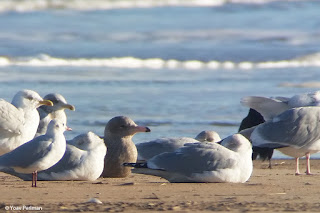 Then, after several hours of searching (which meant we had no chance to get to the White-billed Diver / Yellow-billed Loon in Lincolnshire on time), I got a call from Alison that they had found our bird further north. I hurried to join them and the bird was showing well, albeit distant. WP tick #2! It was swimming with other male scoters (interesting to see single-sex flocks of scoters), and oh boy, that yellow bulge was huge! And it was nice and black too. Great bird and really satisfying to see it after working pretty hard - somewhat more challenging than the Druidge diver. 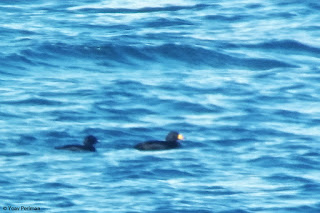 Looking north from Goswick - Berwick-upon-Tweed in the distance 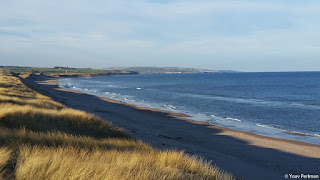 Supporting cast was absolutely fantastic. Hundreds of Long-tailed Ducks and Red-throated Divers, nice numbers of Eiders and Red-breasted Megansers. Quality birds included an out-of-season Manx Shearwater, 4 Slavonian and 1 Red-necked Grebe, 3 Great Northern and 2 Black-throated Divers, and 4 flyover Twite. See my eBird checklist here.
Then it was the L O N G drive back. Many thanks to Alison and Chris for the good company and for the driving. The White-billed Diver will have to wait for another day. Now it's time to get some sleep. Good night.
פורסם על ידי Yoav Perlman ב- 11:09 PM