Now I am back in cold and grey UK, but I have a small debt from my final day in Israel to cover. I had a few hours around midday to bird with my mates Jonathan and Meidad. It was lovely and sunny. We birded around some reservoirs in the Judean Plains. Nothing special, rather quiet in fact. But still lots of species - check my eBird checklist for the morning. I already miss this type of casual birding. So what did we see? There were many raptors up in the air, making the best of the sunny day to gain altitude. There were several Greater Spotted and Eastern Imperial Eagles, but only this spot was close enough to photograph, just about: 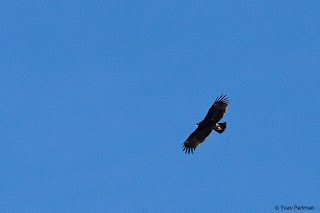 Near Kedma a large flock of about 1000 Common Cranes provided an ambiance similar to Agamon Hula: 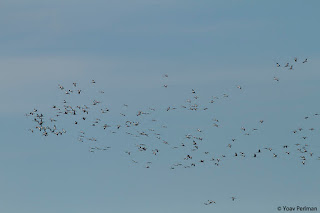 The reservoirs had large numbers of waterfowl, but we found nothing special. Fair numbers of White-headed Ducks in most reservoirs, and small numbers of White-headed Ducks too.
Some time ago I started a project to photograph as many bird species in Israel as possible. Obviously I am not very living in the UK, but in every trip I try to cover some gaps. I stand now at 409 'species', collated in a Facebook album. Checking the reservoirs, I added three missing species, like these Tufted Ducks: 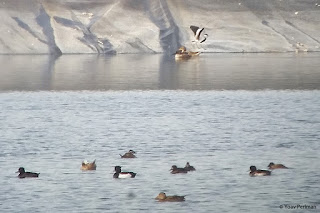 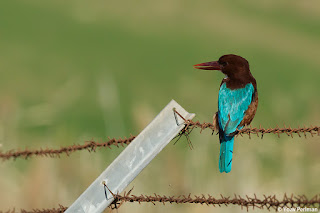 To summarize my trip, I had a lovely time in Israel with family and friends, but very little birding. I dipped on the Asian Hoiuse Martin, and had no time to connect with some quality species present in Israel currently - Lesser White-fronted Goose, Slavonian Grebe, Basalt Wheatears etc. Next time.
פורסם על ידי Yoav Perlman ב- 9:12 PM