So what's my story with Waxwing? Since childhood, I wanted to see Waxwings. In Israel they're mythical rarities - a handful of records from the 1960's and 1970's, and that's it. And they're beautiful. And they're unique. And despite originating from the cold boreal forest, they feel so exotic. And they toss berries up in the air.
Since I moved to the UK this is the first proper Waxwing winter. I have seen a few this year already, but have not satisfied my appetite with them, yet. Today I got one step closer to catharsis, but I still need a really tame group in a frosty morning at eye level.
Anyway, today before work had an enjoyable hour or so with UEA ringing group mates. A flock of about 20 have settled in a park near my house for a few days now. As part of a national project, we tried to ring some today. When I arrived it was so mild they were flycatching from tree-tops and didn't care much about berries: 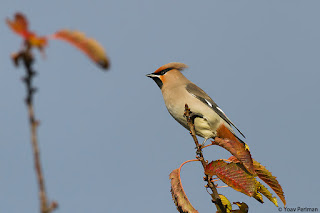 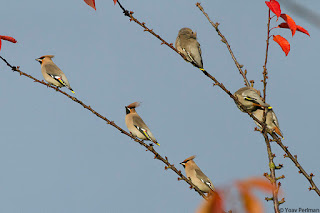 But later on they did come down to their favourite Rowan tree and we caught six! Fantastic birds. We had a nice selection of different ages and sexes. Those wings - wow! 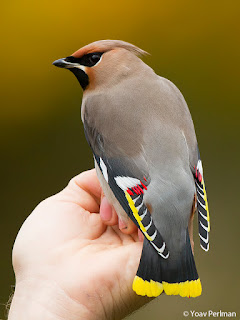 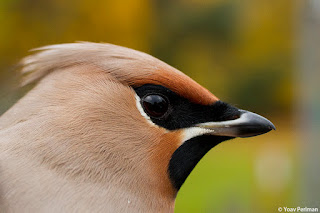 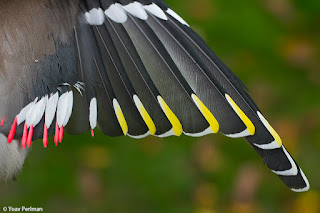 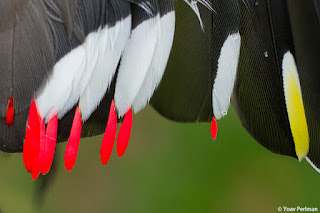 Those waxy tips are just brilliant aren't they? 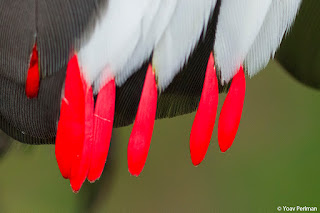 I didn't know that adult males have red waxy spots at the tips of tail feathers too: 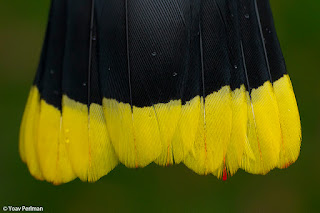 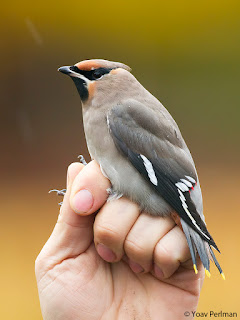 1cy female (left), 2cy+ female(right). Note difference in pattern on primaries. The adult female had suspended its primary moult - outer primary unmoulted. This is an uncommon moult pattern, but it is mentioned in Laurent Demongin's guide. 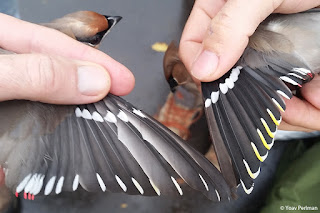