When I got back home yesterday afternoon from Burnham Overy, news broke of a possible Cliff Swallow at RSPB Minsmere, an hour away. Then it was confirmed. Then I was thought to go down to roost in the reserve. With me being away for the whole day, and Saturday morning football duties my chances didn't look good. But eventually I managed to get myself out very early this am for a all-or-nothing brief twitch pre-footy. I was joined by a half-dead James, and a cheerful Dougal. We got there when it was still dark. Walking though the woods of Minsmere at dark was rather mystical. We got to Bittern hide early enough to secure seats by the windows. We waited for first light, then for second light, then the sun rose and no swallow. We had a complete Minsmere experience - two or three flyby Bitterns, great views of an Otter on the ground and swimming (too dark to photo) and some calling Bearded Tits. A call from the visitor centre that the swallow had been seen over there saw about a hundred adults running down the hide stairs and across the woods, in a rather comic rat race. When we got to the martin breeding wall we were greeted by the news that the bird had just departed south and away. I glimpsed a distant hirundine silhouette but nothing identifiable. The realm of a dip was threatening. We started comforting each other how great the otter was etc. when the bird reappeared with some Barn Swallows on the meadows above the cliff. Again, all several hundreds of us scrabmled up to the meadows, and finally we got views of the bird. Phew! The small hirundine flock kept resting on the top of bare trees and bushes, offering good views. The Cliff Swallow, a 1st-winter, showed very well through the scope, and we all admired its robust structure and beautiful rufous nape. The swallows hawked some insects and generally stayed in the same are for about an hour until we had to leave. It gave some good flight views but with time pressure I had very limited success with photography. 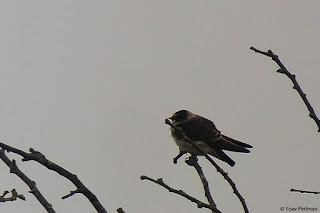 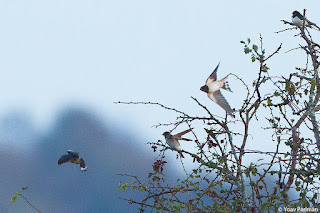 Then the sun came out: 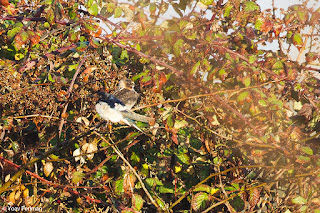 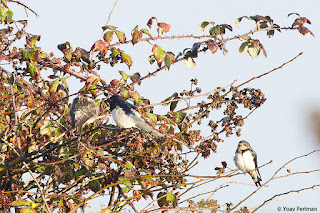 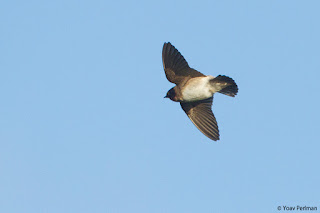 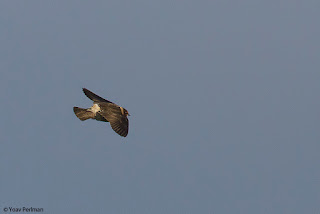 What a great bird! It really wasn't on my radar for this time of year, especially after such a Siberian-influenced autumn. But hey, this is what makes this game so much fun. And the swallow did what it had to do and showed exceptionally well. Good to see lots of friends and friendly familiar faces, including some of London's finest. 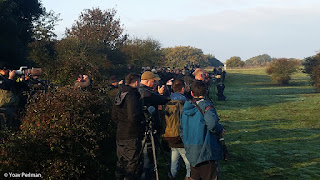 What a year Minsmere are having! hats off to their staff for coping with such a large, rogue crowd in an admirable way.
פורסם על ידי Yoav Perlman ב- 2:38 PM