I am so glad to be back in Israel. Came here with my family for a two-week visit. First day was devoted to friends and family but I was so happy to see all the birds around. Just casual stuff but lots of things - Long-eared and Scops Owls, Great Spotted Cuckoos, Pallid Harrier, Lesser Kestrels, Serins, Savis's Warbler, Quail etc. - all common migrants but such a difference compared to my regular experiences in the UK. Highlight was the Rough-legged Buzzard that thankfully stayed and stayed for me, sitting just along route 6 yesterday afternoon. Israeli tick! I was in a great hurry so no time for images. Returned again this morning but no sign of it. Unstable weather meant few raptors.
In the northern Arava I tried for the Red-billed Teal. I checked three sewage farms, and it was in the third. It was very jumpy and flew off just as I got out of the car to scan over the fence, 200 m away. Israeli tick - well, not quite sure about its origin but we'll see. A fine bird anyway. Here I think it is with a hybrid duck thing: 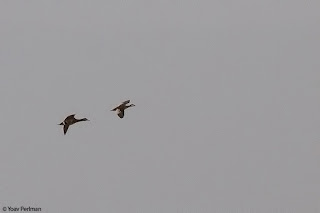 Also there a flock of 6 Baltic and 2 Heuglin's Gulls, and a White-throated Kingfisher.
In the Arava it was raining quite heavy so little passerine activity. At KM76 Rueppel's Warbler, two Lesser Kestrels and a large flock of 400 Spanish Sparrows, until I had to escape from the torrential rain. 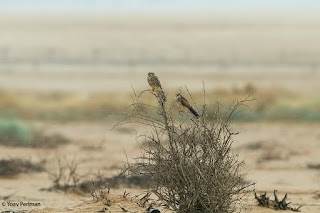 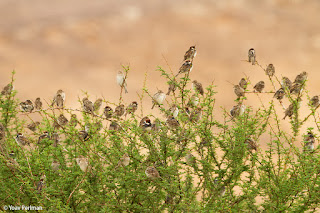 Down at Eilat it was pretty windy but nor rain. At IBRCE ponds two Gull-billed Terns and some Whiskered Terns: 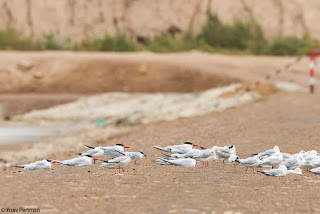 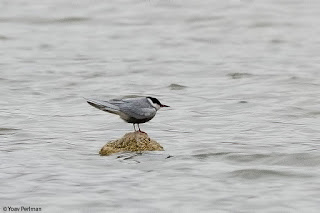 In the afternoon a very large movement of migrants was apparent around the city. Huge numbers of hirundines were grounded, as well as thousands of yellow Wagtails. At the ditch behind the cowshed three Citrine Wagtails and a Spotted Crake. 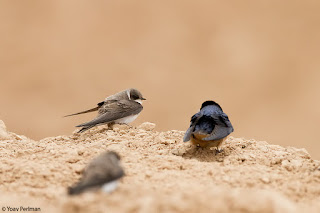 In the evening Leica Birding organized a great event - good to get the Champions of the Flyway show rolling, and great to meet so many new and old friends.
Looking forward to tomorrow!
פורסם על ידי Yoav Perlman ב- 9:50 PM