Yesterday afternoon Nir Hasson had a great afternoon in a small park near his house in Meitar, a small town not far from Beer Sheva. He had there a Little Bunting and a Common Rosefinch - in fact the bunting was seen to chase the rosefinch off... Little Bunting is a national rarity, while Common Rosefinch is a good local rarity.
Even though I was very tired and very busy today, couldn't resist the tempataion - I just love Little Buntings, such elegant birds. Arrived there in the morning and relocated the bird quickly. It was very mobile and pretty shy. It kep chasing off every other finch and sparrow that got close to its territory - a small, overgrown section of the park. I had a hard time to get any decent images of it - this is the only semi-presentable record shot: 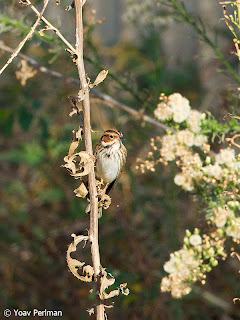 This is the garden where it was: 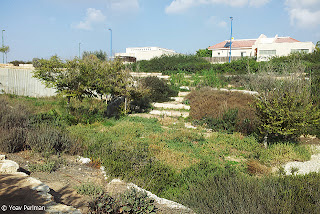 In the garden I also saw several Serins, Bluethroats, both Common and Black Redstarts, Spanish Sparrows, Corn Buntings etc. Didn't see the rosefinch again.
Later on Eyal, Erez and Nir arrived and ringed the bunting - Erez gave me a call when I was still pretty close so made a U-turn and returned to see the bird in the hand. It was identified as 1cy. This slightly upcurved upper mandible is so lovely! 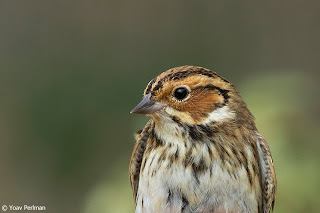 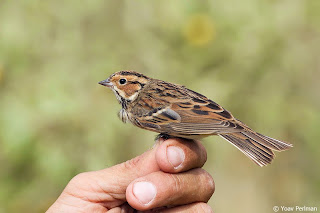