Today I led the Mt. Hermon tour with Nadav for the Hula Bird Festival. After breakfast we left the hotel and arrived directly at the drinking pools pretty early. Immediately we noticed large numbers of finches feeding and drinking around the pond. Showed our clients their first Syrian Serins and soon saw quite many more. We positioned ourselves to watch the drinking, and enjoyed a very active hour or so with lots of birds coming in to drink. Of course Chaffinch, Linnet and Goldfinch in big numbers, but lots of good stuff mixed in. Best were Red-fronted Serins. We had three, later on other groups had another 20! This is an outstadning concentration in modern Israeli standards. Other goodies we had were some Yellowhammers and Bramblings, two Dunnocks, many Rock Buntings and Syrian Serins and a Redwing overhead. 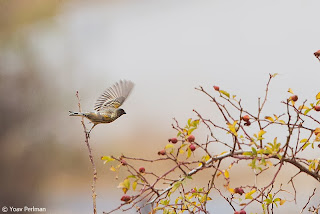 Then we left the drinking spot and climbed up with the cablecar to the upper platform. It was cold in the lower platform to start with, so on the upper platform it was freezing and the wind was strong. Bird activity was poor and we really didn't see much, only quite many Woodlarks and one Fieldfare. Just before leaving we spotted this Black Vulture which was a good consolation prize: 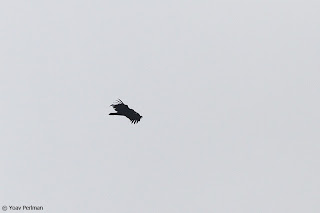 Returned to the lower platform for other target species. Hard work again but eventually we had good views of Sombre Tits, and part of the group saw Western Rock Nuthatch. 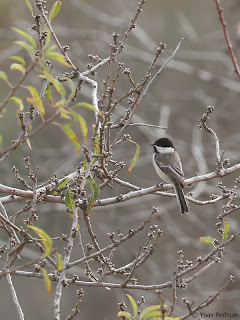 After an excellent lunch at the Druze village of Majdal Shams, I decided to skip the original plan of searching again for finches and buntings on the windswept Golan Heights, and headed back down to the Hula Valley instead to see some large, noisy birds. We had a enjoyable last hour of light watching a good pre-roost gathering at Lehavot Habashan fishpons with thousands of Black kites, Pelicans, Black Stork, herons and egrets, one nice Peregrine, some Citrine Wags and Temminck's Stint -very nice end to a good day. Many thanks to my co-leader Nadav and to Martin and Sander who helped me a lot during the tougher parts of the day.
פורסם על ידי Yoav Perlman ב- 9:55 PM