Megan, Michael and the purple chicken

This morning went birding at Ma'agan Michael (often called Megan Michael by UK birders). Some pretty good birds were reported there in recent days so I was looking forward to a nice morning of birding. It was quite nice indeed but migration was still on the slow side, especially few shorebirds.
I first went to check the Purple Swamphen Lior had found a few days ago. I relocated it pretty fast on the reedy edge of a very birdy fishpond. It showed on and off for some time. In Israel we mostly get the green-backed African form madagascariensis; there are only two Israeli records of the grey-headed Asian form caspius. Lior was there again with a group of kids so I didn't try to get any closer to it and settled with distant views from across the pond. 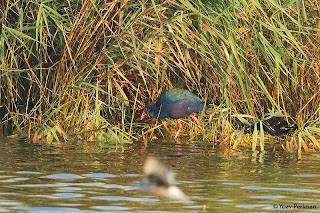 Lots of terns were feeding on the ponds. Especially big numbers of White-winged Terns, and of course lots of the local breeding Common and Little Terns. Fewer Whiskered Terns and one adult Gull-billed.
Almost all White-winged Terns were adults, in varying stages of moult out of breeding plumage. They have a periodic feeding technique - they forage slowly into the wind. When they reach the end of the pond they fly quickly downwind to the other end and then again slowly make their way upwind, dipping into the water and collecting stuff from the water surface. This makes them rather easy to photograph on the wing. Lovely birds they are. 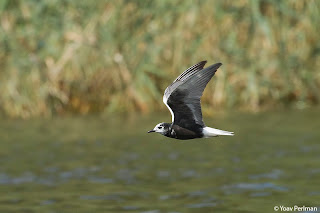 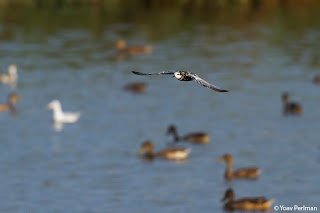 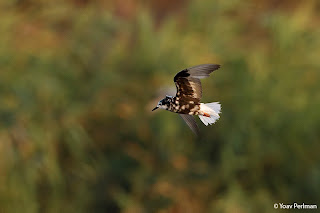 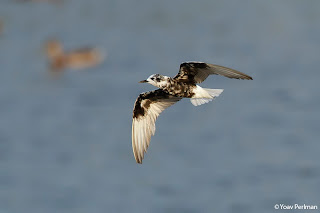 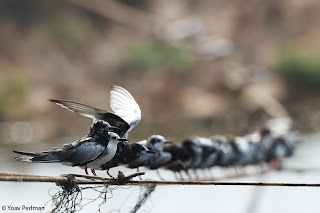 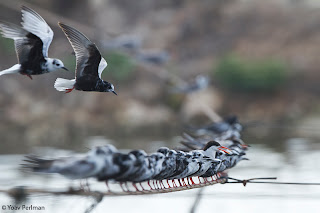 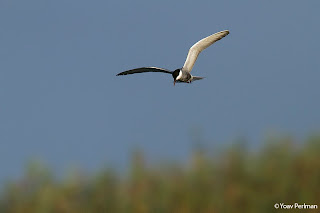 Rather few shorebirds on the beach - 21 Greater Sand-plovers, some Turnstones and Sanderlings. Gulls included Armenian, local breeding Yellow-legged, one 2cy Med Gull, some Black-headed and lots of Slender-billed. 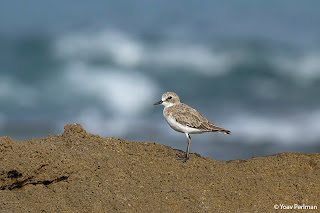 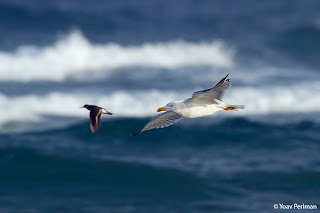 On the way out noticed this poor Little Grebe hanging from a net protecting the fishponds. First time I see a Little Grebe hanging like this (many years ago had a black-necked at Kfar Ruppin). With the assistance of Asaf I cut it out and released it - damaged wing but hopefully it makes it. This issue of massive nets covering fishponds is being dealt with for about two decades now, but as far as I can see very little has changed on the ground. These nets still kill too many birds every day. 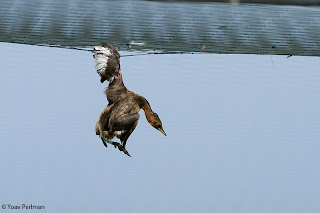