This mornign I went ringing at Ashdod. There was a bit of a weather change at night (from disgustingly hot to very hot) so I was hoping to have a good catch but in fact it was a rather quiet morning with few migrants on the ground. Quite many retraps from last week so it seems that few birds have arrived since then. The only bird worth mentioning was this adult Marsh Warbler: 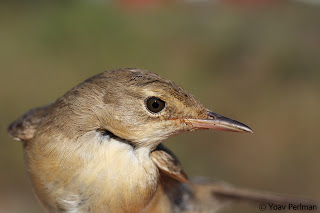 Early in the morning I received a bombshell text from Yotam that he had just caught Israel's 8th Gropper (I still need it for my Israeli list). Good stuff! Hope we ALL have a good autumn (not only at Eilat).
Later in the morning I had a flyover 1cy Rose-coloured Starling. It flew out of sight with a myna; I went to search for it in the near area but no sign. Not bad (but not good enough).
Thanks to Arad for his help.