Yesterday I went ringing in Ashdod with Shlomo. First thing in the morning a small group of Common Mynas flew into my nets, and I was contemplating what to do with them. This is an agressive invasive species, that is known to cause serious ecological damage around the world. In Israel there is no evidence yet whether they effect any local bird populations. Anyway, they have colonized the whole country, and practically they will never be eradicated from Israel, as the population size is too large and the authorities are too slow. So it seems that they are here to stay, and perhaps we should accept them as part of our fauna.
Anyway, it was 05:30 and I was thinking what to do with them. My options were to ring them, release them without a ring, or hit them on the head. I called Ohad and he said that roasted starlings are very tasty. Yosef asked me not to contaminate 'his' annual ringing report. And Gidon suggested ringing them so that we can learn something about their movements. Eventually I listened to my big brother and contaminated Yosef's report. They are not fun birds to handle - loud and biting and scartching, but are rather pretty. 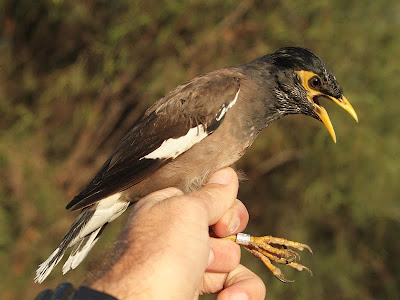 Apart for un-roasted mynas, I had many Willow Warblers (some very grey Scandinavian birds) and a few Bluethroats, all females: 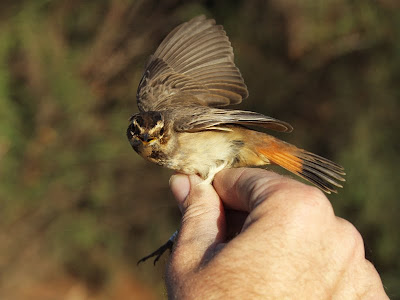 Among the acros I had one Great Reed and one Marsh Warbler.
Marsh Warbler - note the short bill and pale claws 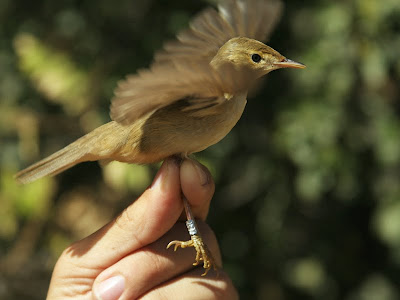 Today I had meetings in Be'er Sheva. While driving down I got a call from Eyal asking me whether I've seen Red-breasted Flycatcher this year yet. The answer was no, so I joined Eyal for a minor twitch in one of Be'er Sheva's city parks. It was actually a nice adult male with a red throat and it behaved very well. Unfortunately I left my camere at home. Eyal also found there another good bird - Collared Flycatcher.
פורסם על ידי Yoav Perlman ב- 7:42 PM