Yesterday (10/10/09) I went scuba diving at Eilat. Before my dive buddy woke up, I had a couple of hours of birding in the traditional birding sites of the southern Arava - Yotvata, Samar and Elifaz.

Contra to the situation in spring, when the whole region is teeming with birds, this period of autumn is actually very boring. It seems that most migrants stop for refueling in central Israel before crossing the vast deserts of N Africa.

So I started birding, with very sentimental memories from March. Both the sewage farm and fields of Yotvata were very empty. Also nothing to photograph, only this 1cy Masked Shrike posed in the early morning sun though too distant: 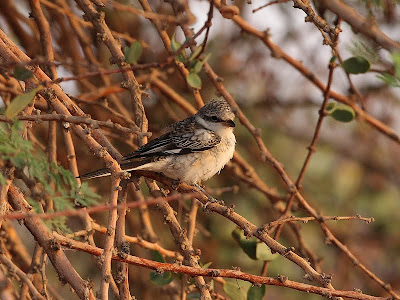 However, I seem to be having some luck with Red-breasted Flycatchers this season: I had four different birds this morning - one at Yotvata sewage, two in the Samar date plantations, and one obliging individual at Elifaz sewage: 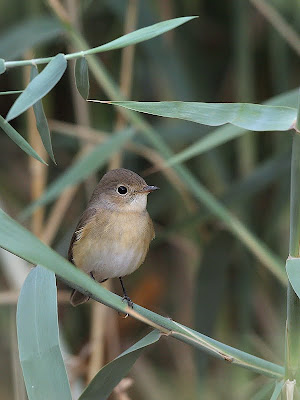 Actually, Elifaz sewage was the only site which had good numbers of birds - it looks quite promising for November, when I'm sure it will host a good sibe. But till then, I had to settle with many acros (all those I saw well were reeds), several Savi's Warblers, Indian Silverbills etc.

So it wasn't too frustrating for me to end the morning's birding and go to Eilat for some diving...