I spent a couple of nights in Eilat, taking part in an international course organised by Noam Weiss, director of our Eilat Birding Center. The course, funded by the Ministry for Regional Cooperation, with the City of Eilat, was themed around the management of community-based bird observatories, with participants from 15 countries - Balkan, Caucasus, Mediterranean, Middle Eastern - what a wonderful mix of great people. Some were old friends, others new. Those were days of international work, international people and international birds.

Mega! African Crake found yesterday by a member of the public in Eilat, taken into care. 2nd record for Israel! Photo by @NoamWeiss10 @_OSME pic.twitter.com/cmNTtG9qnX

The bird, second for Israel, was taken into care in the Hai Bar Yotvata Reserve, and was rehabilitated by Israel Nature and Parks Authority staff there. I was anxious all week - will it recover? When will it be released? Knowing that the course is approaching, I kept all my fingers crossed. Eventually, my timing was perfect - the decision was made by INPA to release it back to the wild on Monday, the first morning of our course, at the Eilat Birding Center. Noam asked me whether I want to ring the bird. At first I offered the ringing team to go for it, then I thought to myself, why not. What an amazing bird to ring. It felt very fit and ready for release. 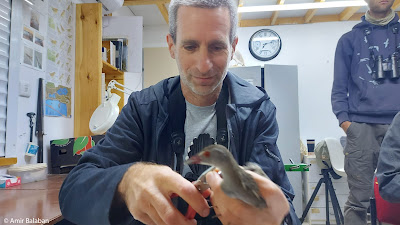 I was privileged to release it too. Suddenly, I realised I won't have a photo of the bird. I asked Noam to grab my camera and use it when I release the bird.
New profile picture? 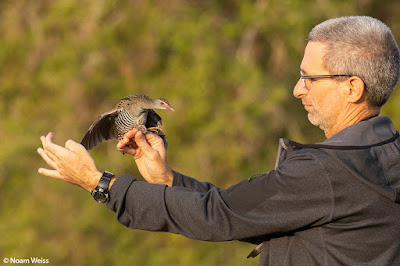 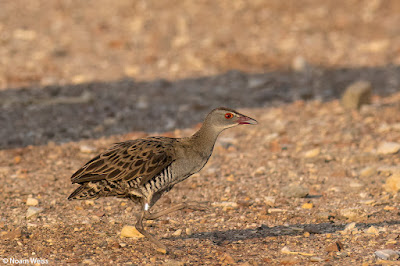 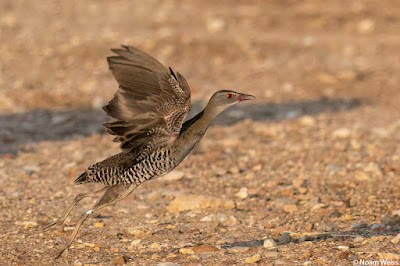 The bird disappeared immediately in thick vegetation, never to be seen again. It was released in a section of the park that is closed off to the public, so nobody could bother it as it readjusted to the wild.
That afternoon I squeezed in half an hour of seawatching, to join the incredible Swinhoe's Storm-Petrel party. Indeed, I saw from shore at least four individuals, whizzing around a fishing boat. Very cool.
Next morning, yesterday, we went early with the course participants to do some desert birding near Amram's Pillars. 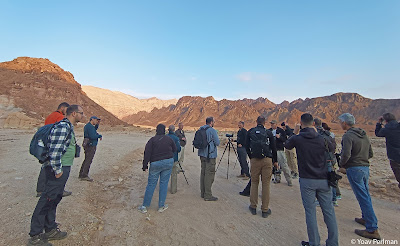 All expected desert species were seen, including four Sinai Rosefinches. They were a bit distant for photography but were seen very well and were very vocal. In this region, the geology and geomorphology are perhaps as impressive as the birds. 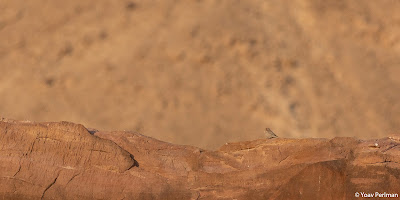 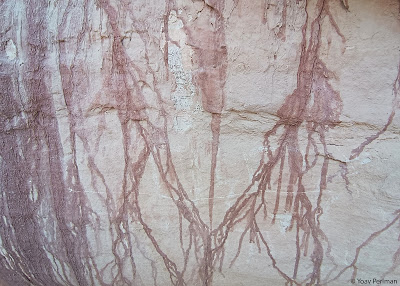 Then, after I finished what I had to do with the course, I headed north via Nahal Etek, where the Verreaux's Eagle are being seen. I spent a few hours there with Amir, Meidad, Arad, Barak and a few others, scanning and scanning. The scenery there is so serene and beautiful. And there's no phone signal. Bliss. If only the eagles showed up... But they didn't. There was a trickle of Steppe Eagles passing through, a Common Raven and that's all. 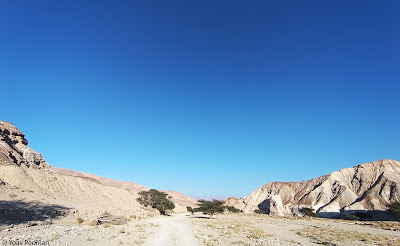 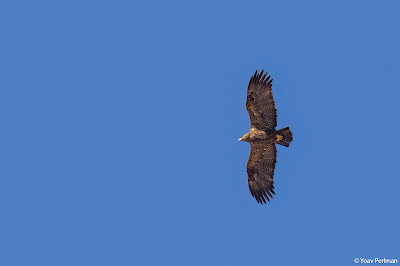 Huge appreciation to Noam and the Eilat Birding Center team for the successful operation of the course, with the fantastic support by Alen, Amir and the rest of the team.
פורסם על ידי Yoav Perlman ב- 7:55 PM