On Saturday, Nadav Israel, a bird photographer, posted these images of an unknown sparrow on Facebook, asking for help in ID: 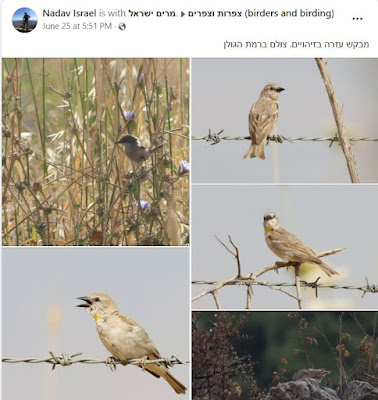 Amir Ben Dov noticed it online first, of course it was a stonking male Yellow-throated Sparrow, apparently in song, 9th record for Israel! Amir followed up on the location with Nadav, and indeed next day it was refound in the early morning by several twitchers. I couldn't go yesterday, which was quite tough because I needed that bird for my Israel list. The only twitchable bird arrived in 2017, during my years in the UK.

I have seen this bird before, in India, and even inside the WP, in Turkey. However, a national list is different, so I was keen to see it. Online discussions raised the suspicion that it could be breeding here - why would it be here, in late June, in song? However, no further breeding evidence was noted.
This morning I was up early to get to the Golan Heights first thing. It took me and the few other birders on sitea few minutes  to get our bearings. Soon I first heard the bird, then we spotted the male Yellow-throated Sparrow - what a relief! Fantastic bird, the chestnut lesser coverts, long, black bill and yellow throat were wonderfully visible. And that song... The bird wasn't close, but the views were great. It was hanging around with another drab sparrow; at first look we dismissed it as a young House Sparrow but then the penny dropped in my brain - it was another Yellow-throated Sparrow! 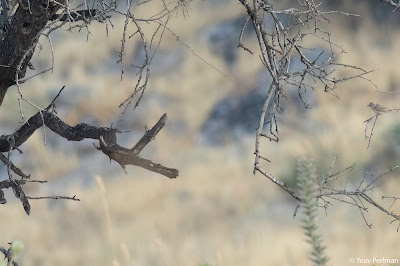 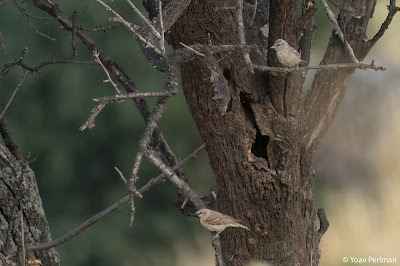 We watched the birds as they moved together, then I saw the adult male feeding the second bird - a fledgling! Breeding proof! How exciting, a new breeding bird for Israel. They flew up to the overhead wires, and away, then mixed with House Sparrows, then reappeared. 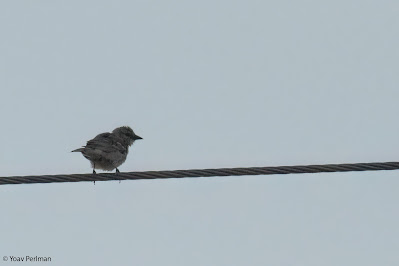 Then they showed back up on the original tree. Only later I figured out that its their nest in here: 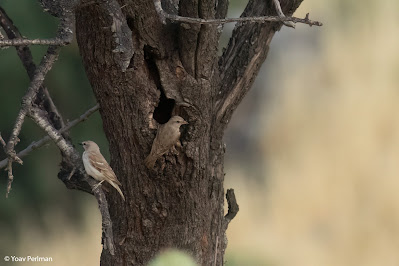 The bird at the nest entrance here is an adult female, worn, so there were at least three individuals!
By 07:00 I had to rush off to a meeting in Kfar Ruppin, very satisfied by today's discovery and by my bimbo (for those who aren't familiar, Spanish birders use the term 'bimbo' for tick). Driving on, I had time to reflect on the discovery. It really is great that in Israel, despite its small size and relatively good birders coverage, there are still new phenomena left to be discovered. Could there be more pairs of Yellow-throated Sparrow breeding on the Golan Heights? We will look out for them in the next few weeks and try to come up with an answer. I wouldn't be surprised if they do. When I saw them in Turkey, near Birecik, their breeding habitat, in pistachio orchards, wasn't too dissimilar to the habitat in the Golan Heights where this pair is breeding: 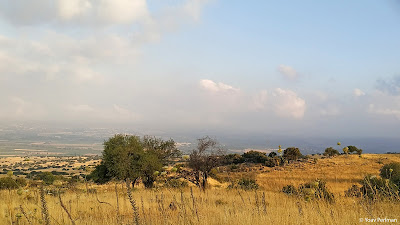 Interestingly, we did survey this section of the Golan Heights thoroughly and methodically in recent years and found none, so maybe it's a new arrival?
During my time with the sparrows I enjoyed the fine habitat and its birds - several Rufous-tailed Scrub-Robins, several shrike families, really nice (eBird checklist here).
Woodchat Shrike, made in 2022: 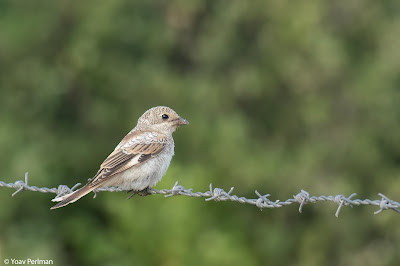 Nearby, on the way out, I had a family of Upcher's Warbler. And these funny teddy bears.
Rock Hyrax 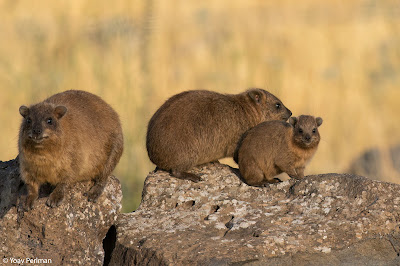