Life and death on the sand dunes

Yesterday Meidad and I ventured out deep into the desert for fieldwork. We are completing a large-scale project mapping breeding birds for our atlas. We both worked in the Agur Sands NR, which is in fact the very extralimital extension of the Sahara sand belt that stretches across Africa into Sinai and the western Negev.

The habitat includes mobile sand dunes dotted with some bushes, and the valley floors are coated with a layer of Loess soil where there's a bit more plant productivity. Admittedly, sand dunes aren't the richest desert habitat for breeding birds in Israel. However, it is an important habitat for some threatened breeding species (more in these below), especially after good winter rains, as we had this past winter. Sandy habitats are certainly a biodiversity hotspot for psammophile organisms such as rodents and reptiles. Walking across the pure sand dunes in the early morning, it is always impressive to see how much nocturnal activity there was - every afternoon the wind swipes the sand dunes clean. Don't know what happened to my phone camera, however I quite like this monochromatic effect... In this photo there are tracks of Crowned Leafnose Snake (Lytorhynchus diadema), several gerbiles, jerboa and many beetles.

Nidua Fringe-fingered Lizard (Acanthodactylus scutellatus) - must be a pregnant female: 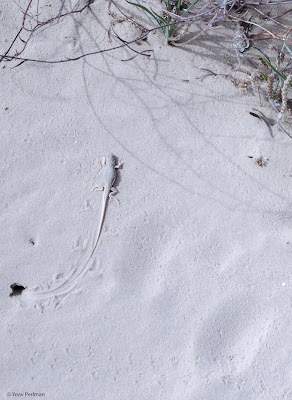 Any guesses what this is? 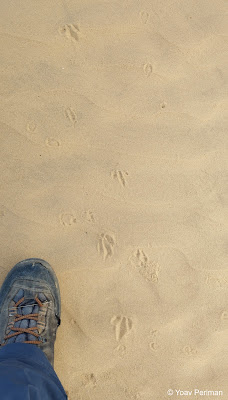 The most dominant breeding bird was Mediterranean Short-toed Lark. These sandy habitats are very important for this threatened species in Israel, especially when plant productivity is relatively high following good winter rainfall. Indeed, I had them in very good density, and their amazing song filled the sky - they are fantastic mimics. Here this male includes Crested Lark in his song, while another flies by calling:
They were busy breeding, including feeding recently-fledged young: 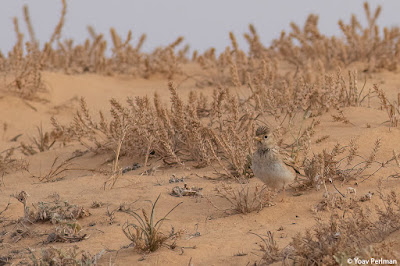 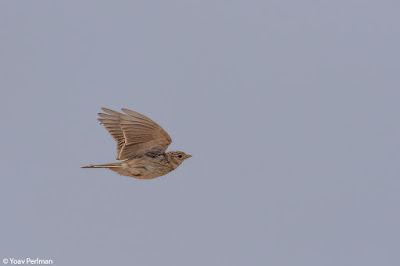 These are three youngsters: 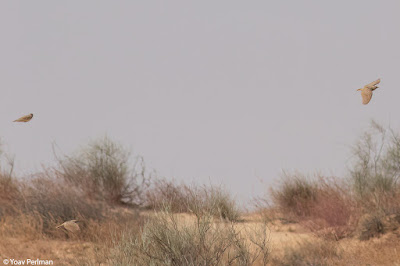 I was alerted by a local Brown-necked Raven about the presence of a raptor - the raven was harassing a migrant Montagu's Harrier that had just caught prey, most likely a recently-fledged Mediterranean Short-toed Lark - life for one, death for another. 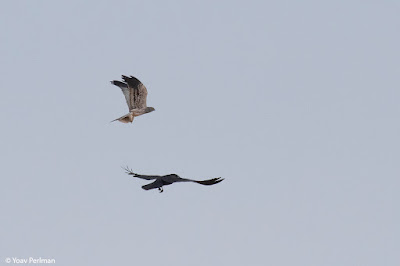 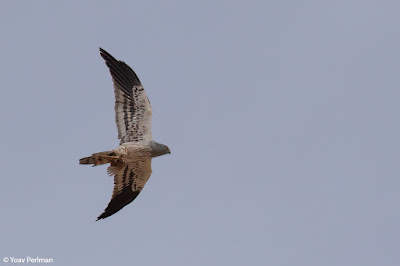 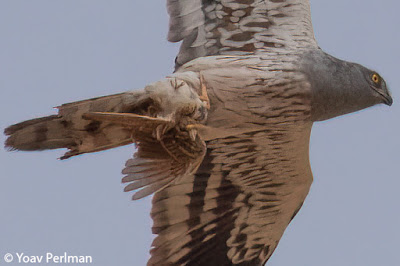 Another montys, a female, cruising over the sand dunes hoping to snatch some breakfast before another day of migration: 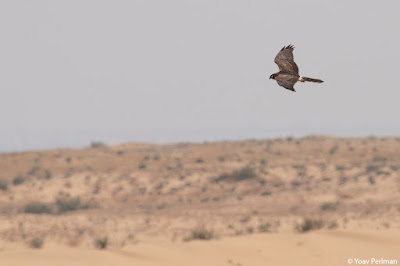 This certainly isn't prime habitat for terrestrial migrants, but migration here never stops and migrants can be found sheltering even in unhospitable habitats. Migration was in full swing and very evident both up in the air and on the ground. I flushed a Corn Crake off a random sand dune, my first for the season - good to see one alive and well... 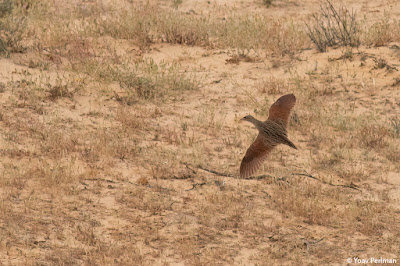 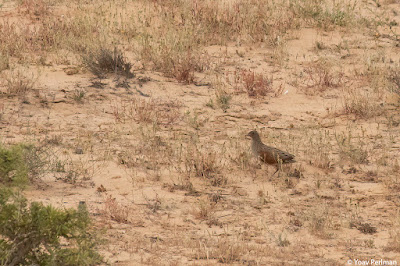 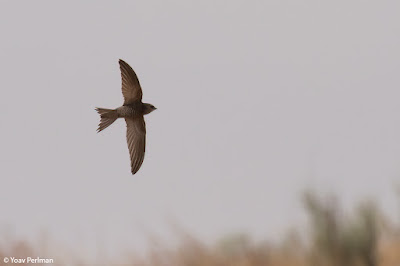 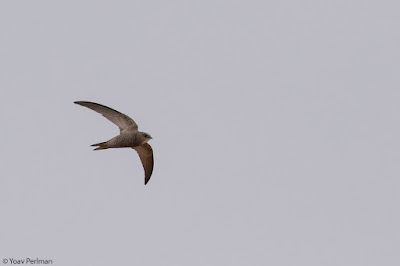 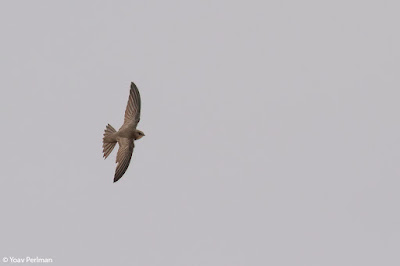 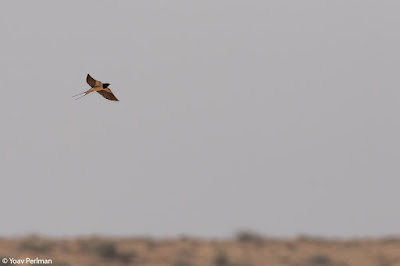 Oh, those beautiful European Bee-eaters. Which version do you prefer - the first with all individuals aligned? 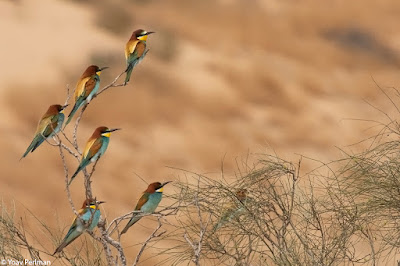 Or the second version with one individuals preening and facing the opposite direction? 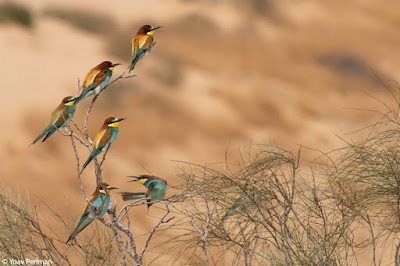 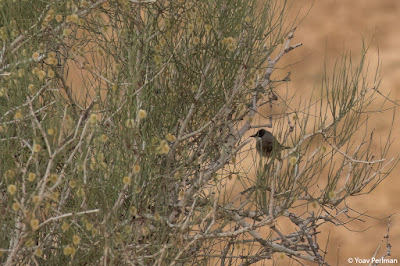 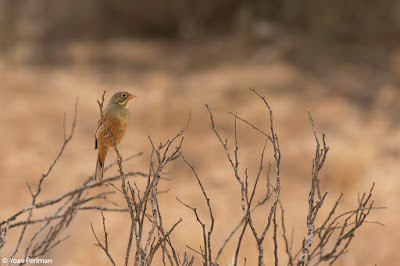 On the way out I surprised a large Desert Monitor sunning itself on my track - male by the contrating colouration: 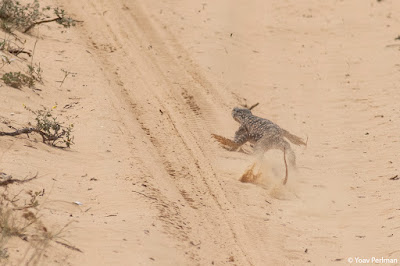 eBird checklist here.
Unfortunately, the way out was longer than expected as I got stuck trying to climb a track climbing up an extremely tall sand dune. After a couple of hours of failed attempts to free ourselves from the sand, we received help from a passing convoy of friendly ATV'ers. Thank you Yossi et al! 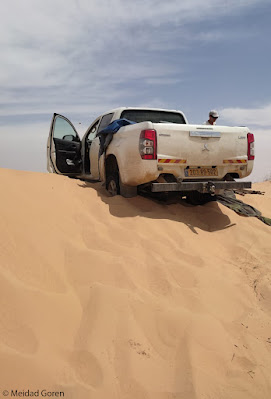