Shag on the beach

What a stupid, yet unavoidable title... This morning I worked at Ma'agan Michael. Weather was unstable, hot, dusty and windy. Yet it was a pretty good morning. While driving in, two gulls nearly gave me a heart attack. This leucistic Black-headed Gull almost cased a major hear attack: 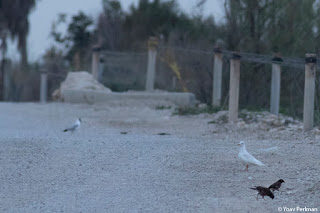 Then another gull flew by, a large one, and almost gave me a minor heart attack - probably Yellow-legged: 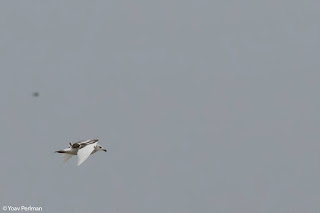 A Caspian Tern was on the beach, rather scarce, and was joined by the above leucistic gull:
There were many migrants around - big numbers of Yellow Wagtails, many warblers, and a few wheatears, including Isabelline and Black-eared: 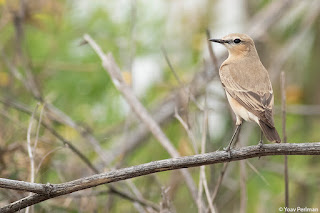 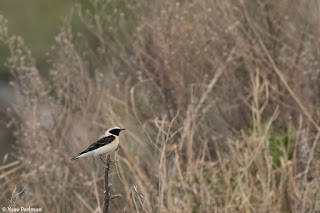 Among the many herons, there was a light gray morph Little Egret: 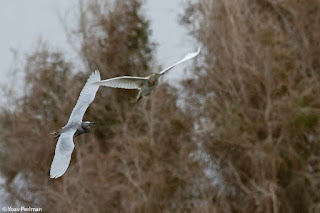 Other notable birds were my first-of-year Gull-billed and Common Terns, Citrine Wagtails, Little Gulls and more. 97 species in total, not bad (eBird checklist here).
Just as I was wrapping up the morning session, the 'Rare Bird Alert' alarm went off - Hadoram had just found Israel's second Shag! It was in Ashkelon, about 2 hours drive, and I had to be home by 13:00.  I did see the first, back in 2005. However, back then, views were quite awful, and I understood that this individual was behaving like a top model. Cutting it very fine, I decided to go for it - a big rarity, and I was hoping for good views. I drove through traffic, communicating with friends out there, reporting that the bird is chilled, so I was too. When I arrived at Ashkelon NP, I met Jonathan at the carpark heading out. He pointed towards the rock where the bird was supposed to perch, but I couldn't see it. I walked down to the beach quickly, and fellow twitchers there pointed towards the bird as it was swimming south and away, very close to shore. I abandoned my scope and backpack, and started running on the beach, trying to catch up with the Shag. Eventually I did - it was fishing in small rockpools, showing at very close distance but it was constantly moving south. After a few minutes I gave up, and let it drift south. I lost it in the distance - wow, that was close! Had I arrived five minutes later I'd be very disappointed. Eventually it returned north to the original spot a few hours later.
Congratulations to Hadoram for such a cool bird! 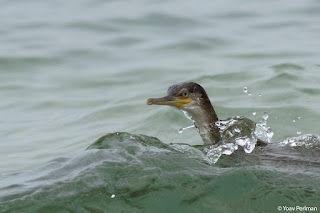 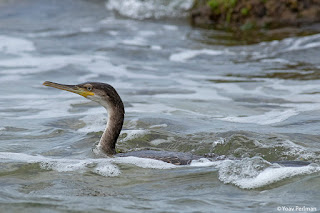 It is curious that Shag is such a monster rarity in Israel. They breed in Cyprus, less than 400 km away, which shouldn't be a big deal for a marine species. Yet, they are probably highly sedentary and rarely move. Interesting.
פורסם על ידי Yoav Perlman ב- 10:31 PM