This morning I birded with Jonathan in the agricultural fields around Gal'on in the southern Judean Plains. Yesterday a young Bateleur was found there by Shraga Alon:

Mega news: Bateleur near Gal'on in the Judean Plains a short while ago, found by Shraga Alon, photo by Ezra Hadad of @rashut_hateva (thanks for sharing!)

I was keen to get a photo of it. I have seen several in Israel, including earlier this year, but haven't managed a photo yet. The obliging, long-staying bird that spent most of its time in the exact same area overlapped its lengthy stay with my time in the UK.

This is an excellent part of the country, very bird rich. So the hours we spent birding and scanning until Jonathan spotted the Bateleur were enjoyable and fruitful. I found a young Isabelline Shrike, sadly with a deformed bill: 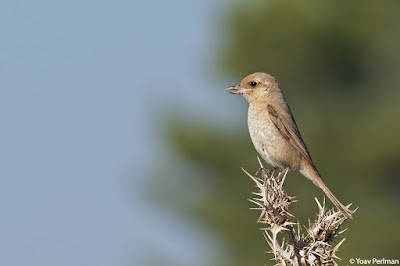 A flock of 43 Wood-Pigeons flew south: 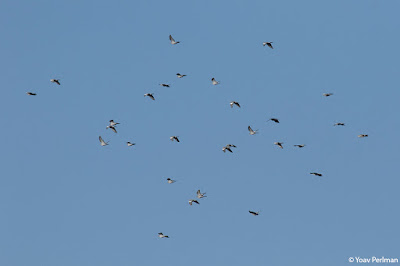 There were many eagles about, including Greater Spotted, Imperial and Bonelli'sץ Volume off! Horrible noise from route 6:

Then Jonathan spotted the Bateleur, flying far to our west, showing its unique and distinctive wing shape and tail-less silhouette: 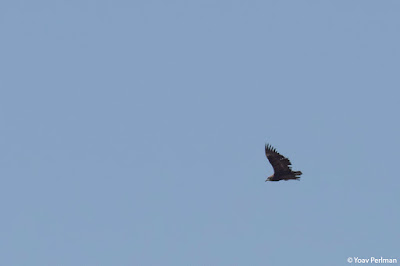 After a while it flew towards us, in better light but by the time I caught up with it, it was already heading away: 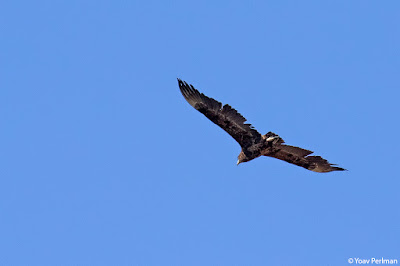 Very cool bird! Close examination of wear and notches indicates that this individual may be the same bird seen in August in the Golan Heights, though I am not sure. Thanks to Yotam Bashan and Ezra Hadad for allowing me to use their images: 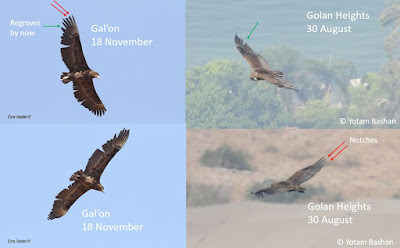