The autumn that keeps taking

Contrary to autumn 2016 that didn't stop giving, this year east coast birders are getting by the Gods of Birding for our sins and there is nothing here. Despite the lack of birds resulting from the consistent wrong winds, I went out with James to Wells Woods this morning. It was a sentimental morning - today we celebrated (just about) three years of friendship. Contrary to today, on 14 October 2014 we birded in proper fall conditions. Three years later, and I am getting older - didn't do a selfie with James!
Birding was slow and hard going. We worked Wells Woods properly but the few birds that were there on Tuesday had evidently cleared out. The only birds of interest were three Yellow-browed Warblers and two Firecrests. None posed for a photo. They joined mobile tit flocks and wouldn't settle. I was depressed by witnessing a twitch after someone spotted a Pied Flycatcher. And when people started asking directions for Yellow-browed Warbler, it was time to go.
Just as we walked back to the carpark we learned of four Eurasian Cranes heading our way, first spotted over Cley and Stiffkey. We quickly picked them up and they did the right thing, flying over our heads, calling 'hrruu!'. Again, the perspective - in the Hula Valley numbers today have built up to 15,000. But in Norfolk context, even though these birds are probably migrating from the Broads to Welney, it was still cool to see them. 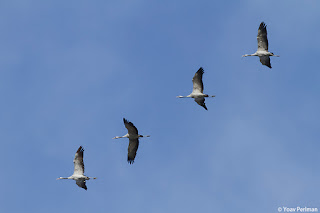 The only other winged thing I photographed today - Red Admiral 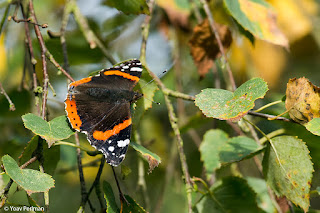